“I don’t wanna be alive, i just wanna die today’ Words that can come out of a 14 year hs, a 18-21 gay college who simply can’t take the pressure of the society and ending their life is the only choice they think they have. There were many meaningful songs these past two years. 1-800 by logic is a track from his new album “Everybody” Where he talks suicide prevention and how his fans inspired him to make that song. While on tour logic went around with friends to hang out with fans and he played them his album. Bunch of his fans said that his music saved their lives. This songs music video also is very controversial as it also portrayed Gay men and a way to portray the LGBTQ community. Now, why do i still want to discuss something that has already been talked about a lot? The rate of calls have went up tremendously since he released the song as people started calling the hotline which is the title of the song. The same day it was recorded to be 5600 calls in the same day because his music was a way for people to realize that there’s help they want any. I personally never had the courage to call the hotline to speak about my issues because i have gotten used to keeping my shit to myself and not speak a lot. 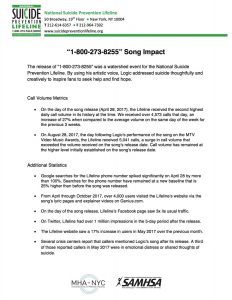 The image above basically shows the power one person’s hand and voice can do. That is all what i want to be able to do which is to help one’s live get better. You should always treat others the way you wish to be treated. We always learn the most important lessons from our hardest experiences and sometimes our parents. I keep listening to this song because it reminds me of many purposes. It reminds me how some of girl back in high school called me fat in front of all my friends and how  embarrassed i felt of myself. Several things have led me to hating myself such as bad grades, weight and especially not being able to be the perfect son for my parents wanted. Not being able to fulfill their wishes with good grades and all that other shit. Music is one of those things kids my age look forward to for any type of help because not all parents understand things from their children’s perspective and i can’t blame my parents for certain things because i’ve grown up living the double life. It all came down to me saving myself from depression and i could not tell my parents why i felt the way i did because they simply didn’t  want to understand and thought i was overreacting and this no excuse to say i didn’t have good parents. My parents are the best people i would have grown up with and i always feel grateful for them and i try not to take them for granted. With being great parents i wish they were my friends. I wish they wanted to talk to me about my problems because in my house i never felt welcomed to talk about my thoughts(suicidal Or not), instead of saying to myself that i have my parents and i can go talk to them, i grew up telling myself that if i don’t save me no one will.

Why this? When there are millions of other songs that can have a much more better meaning than this. Because this song has moved millions of hearts that have struggled through depression and this song was a lope hole to all of those kids that couldn’t find that one voice, that one person that would be there for them to tell them that it will get better before they fucking kill themselves. In 2016 there were 44,965 suicides recorded. Thousands known and unknown people and reasons. Someone taking their life in this short life can really be a decision that they make when the whole world’s judgement and reactions was on their shoulders. Artist like logic and NF are people who talk about personal things and their music has been helpful to many people. What can drive someone to kill themselves? Are we that cruel that our words affect someone’s life that deeply that they don’t want that life anymore. Music is something that is supposed to help lifes get better and 1-800 has done exactly that. It has made me feel like i can talk to someone if i need to and i don’t have to give up like thousands of others.