Imagine a World without pictures or artwork. Instead it will be written or inside of our memories soon to be forgotten, slowly fading away and people that have seen a certain event will only be able to describe that event in words. Soon that generation will die out which will be forever forgotten after some time in History. All with no trace of visual art or picture form. Imagine living in that world, without cameras or art. We wouldn’t be able to to see what George Washington looked like or not being able to see your family members from 100 years ago, It would just be in word form to describe someone or something. All pictures/artwork  regardless what they are represent something. The representation could be different for each person. All can have a meaning to life or something. Just look at it and analyze key details to it to become a symbol or a reminder, whatever it means to you.

Well to mean this picture means that no matter how many times you fail ,you will succeed at reaching your goal if you try a lot of times and learn from your mistakes and grow from the mistakes that you made and then you will reach goal you wanted to achieve in the first place.

This picture has changed me in many ways. At first when I use to fail at something I usually just give up and go on with the next challenge but now I approach it differently. Now I always try to bounce back from failing at something and I try to approach my goal differently with different tactics instead of using the same tactic that lead me to fail at something. For example when I failed a test I was very frustrated (This was a few years back in middle school) and I saw this image with the explanation of it and it gave me motivation to do something about the failing grade I had in my test, I decided to study an hour a day a week before another test instead of cramming the day before and I ended up passing the test.

But also this artwork could mean something else but in similar circumstance. Basically it’s like saying that  There is no elevator to success and that you HAVE take the stairs. To define this, it’s basically saying that success doesn’t come easy and you have to learn the hard and difficult way up to reach your success in life(Like how its harder to reach the 10th floor taking the stairs than taking the elevator which is far easier.) A life example would be one of my family members who came to United States at the age of 16 barely knowing english and trying to get by in life. He went through going back a grade and going forward to the original grade after learning english. Then he ends up taking a lot of remedial classes and graduating 2 years late even though he got high grades and now he works for a company specializing in networking and communications. 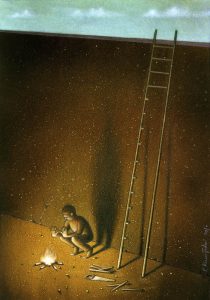 Also this artwork above shows a guy burning wood to make a fire and stay warm. But he prevented himself from getting away from the isolated area. What this artwork mean to is that you must not waste your opportunities that will lead you to your success or freedom. An example of this would be when you have someone from a job that needs your skills in the workforce and they will pay you a lot but you end up rejecting the offer and working a low level job that won’t  support you or anyone else financially. A real life example from my experience would be my Aunt who decided not to come to the U.S because she was dentist in her home country and she was recommended by someone to come to the U.S and take some courses to re do her major but she kindly refused, she would have made a lot more money if she accepted the offer but it was her choice, If I was given this offer I would accept it because the wage gap between 1st world and 3rd world countries is huge and it would help benefit me in the future. But some other example would be my brother , who was offered an apprenticeship in construction and gladly accepted now he’s done his 4 year apprenticeship and now works in construction building,repairing apartments etc..

Overall I want you to know that all pictures or artwork have a meaning to everyone and everybody might have a different perspective to that picture or artwork(It could be good or bad).

But this picture/artwork I have showed displays a powerful message to every person that has seen it and some might disagree with one another but in the end it is what the picture/artwork means to YOU and nobody should be able to change your perspective unless there is a good reason to do so.