For my retail shop analysis, I decided to visit Gnarly Vines and Wine Spirits. This wine shop is located at 350 Myrtle Avenue, in Brooklyn. Approximately 4 blocks away from my home. Before visiting I decided to do some research on them and got a great first impression based on their website. I loved that their philosophy involves wine being about pure enjoyment and that in their shop they’ll tell you what you like and then let you form your own conclusions based on what they’ve told you. Upon their website, they come off as open-minded and very helpful as well as passionate for the wine experience. They mention they offer food pairing and never putting a wine on their shelves unless they really like it. I went into Gnarly Vines with high expectations.

Upon entering the shop, I didn’t automatically speak to anyone to see if I would be approached, however I wasn’t, which was a little disappointing. After taking a roam around the store I approached one of the workers and let her know I was doing a City Tech student and was doing a project. The store was empty, just full of about 5 employees doing restocking. My first impression of the store was that It was decently sized, I thought it was going to be smaller because of how it looked on the outside but I automatically noticed their huge wine selection. I was first interested in what she thought made this store so different from other wine shops. She responded that their take on wine is different in the way that they don’t compromise what they believe in for money. They genuinely believe in handcrafted wines and genuinely believe in the experience of every customer, what they want and look for. She also mentioned they grasp a lot of attention from the neighborhood by having a Wine of the Month Club in which customers can become a member and receive a selection of their favorite wines at $120 a month. They also offer delivery options for their customers and tastings/events. She mentioned all of these things put together really grasp their customers and keep them. I asked them about their pricing for the wines and she mentioned they have wines ranging from $8 to wines that are $300. She then told me to give her 5 minutes, to take a look around the store and to let her know if I had more questions. During this time, I took the opportunity to look around, I noticed that they are very descriptive and detailed with every wine bottle which I personally loved. One thing I didn’t love was how dusty the shelves were. I’m not sure if that’s even a big deal but as a consumer I didn’t like seeing that. Overall my experience out of 10 I would give a 6, I would go back when I turn 21 and perhaps dive more into the experience such as tasting. 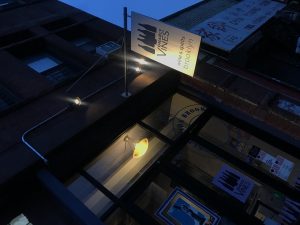 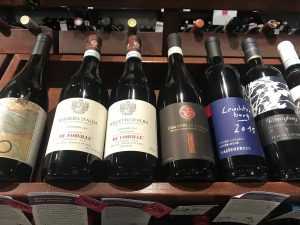 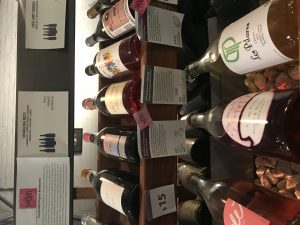 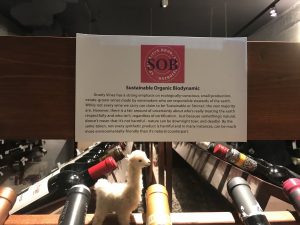 Philosophy of the shop- This grabbed my attention!

In the center of New York awaits supreme sightings, unforgettable buildings, and extraordinary memories… Under $59 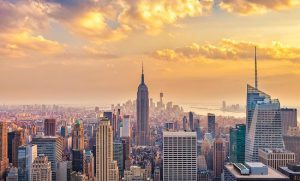 Manhattan is often said to be the cultural and financial capital of the world. With that being said, although there are loads of ways to spend money in Manhattan, there are also many ways a budget of $59 can do for your adventures there. People all around the world travel to walk the streets of New York. From the fiery streets of Brooklyn to the lively nights in Manhattan, New York is a place for everyone.

The Peninsula New York was built in 1905, as the Gotham Hotel. In 1988 the hotel was bought for $127 million dollars and was made into what it’s known now: The Peninsula. 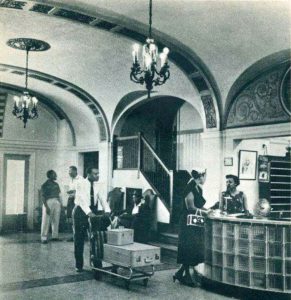 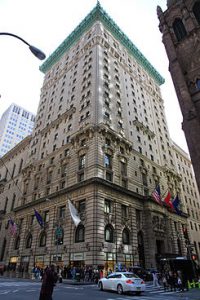 For the Holiday Season on a Friday night the Peninsula offers the entertainment of Christmas Caroling from 5:30-7:00 pm. Not only this, but while watching the carolers you can sip on some amazing hot chocolate topped with fluffy marshmallows, complementary of the hotel along with some gingerbread cookies. The Peninsula also has a new Christmas addition… The Peninsula Sweet Shoppe. Made by the creators of Saks Fifth Avenue window display, the Sweet Shoppe is filled with candy for everyone to enjoy, also complementary. The hotel’s Christmas decorations are one of the best in New  York City 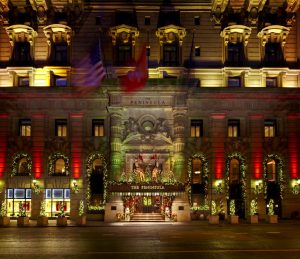 Exterior view of The Peninsula Hotel during the holiday season.

Salon De Ning located at the Peninsula is a rooftop bar that offers spectacular views of Fifth Avenue. It is the perfect place to take in the views as there is no entrance fee. 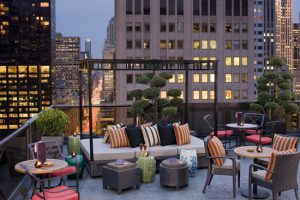 PJ Clarkes was entrenched in 1884. It is located at 915 Third Avenue and is a landmark  filled with rich history. The pub’s motto has always been, “fresh food, frosty drinks and good, old-fashioned conversation.” The saloon is talked about for it’s vintage look both interior and exterior, and not only this but for it’s savory dishes such as the burgers, seafood, and even it’s desserts, as well as it’s ambiance. The Cadillac Burger is one of the most popular plates, filled with double smoked bacon as well as american cheese. PJ Clarkes has something to offer for everyone, and the setting is the perfect historic vibe to sit and enjoy a meal. 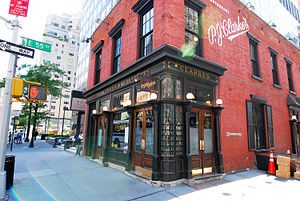 The best windows in town can be found at Saks Fifth Avenue. Located at 611 5th avenue, you’ll find beautiful works of art as window displays. These windows make headlines every year for the amount of creativity put into them. Inspired this year by the Nutcracker, this year’s window exhibits are astonishing. Window’s you won’t get to see anywhere else. The art of window displays started in the 1900’s and have progressed to where they are now. It’s truly heart-stopping to see how much they’ve advanced. 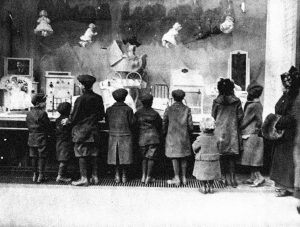 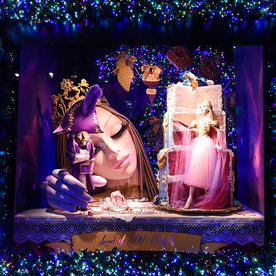 The Brooklyn Diner on W57th street is the perfect scene for a Saturday morning. It’s primitive aura attracts tourists in the area to sit and eat a classic breakfast plate at any time of the day as well as burgers, soups, sandwiches, pastas and great sides. For the past 21 years the diner has been executing service with a smile, and their diner look very vintage. 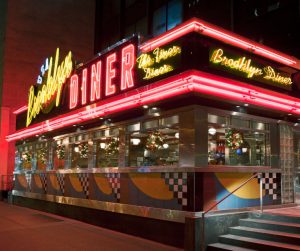 The MoMa (Museum of Modern Art) was originally developed in 1929. During the 1930’s the museum admitted more known artists, one of them being Vincent Van Gogh, as well as Picasso. This brought a lot of attention toward the museum, and the growth from then to now has made the museum well known around New York City. Today the MoMa is referred to as one of the largest as well as prominent museums of modern art. Entry price is $25, and includes pieces from Picasso, Vincent Van Gogh, Roy Lichenstein, Henri Rousseau, Salvador Dali and many more amazing artists.

The St. Patrick’s Cathedral is a NYC landmark located on 50th street on Fifth Ave. In 1810 the property started as a college. After being sold, the Cathedral was renovated time after time, until 2012 when it undercame a $177 million renovation over the course of 3 years.  People all over the world travel to see the Cathedral and it is packed at almost all times of the day. The stained glass, altar as well as artwork all come together to make the Cathedral so beautiful. It’s huge and is filled with people taking pictures walking through it just to take in the experience. Filled with the history that it’s filled with, this is a place you won’t want to miss out on. 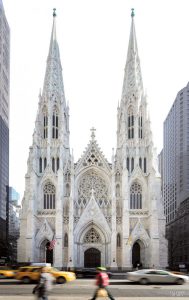 You can’t miss out on some pizza while you’re in New York right? Harry’s Italian Pizza Bar is minutes away from the Cathedral and is perfect for that New York slice everyone loves to have. They offer old-fashioned square pizzas. The pepperoni is my favorite. 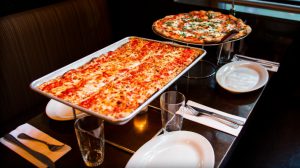 To get to the Rockefeller ice skating rink, walk through the Channel Gardens. For every season the flowers as well as the decorations around them are completely different. It’s absolutely beautiful to walk by. For Ice skating, the fee is $27, but it’s worth being in the center of the madness in Rockefeller. Not only is ice skating super fun, but you get to be right by the biggest most beautiful tree ever… the Rockefeller tree. 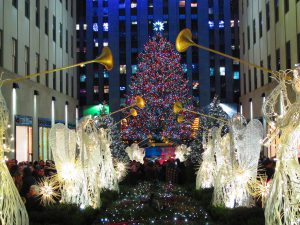 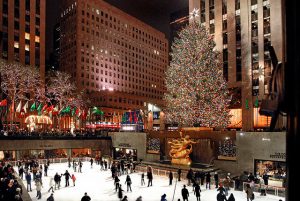 Rockefeller Center is great to walk through, there are tons of photo ops. Not only this but going to see the tree up close is breathtaking, there’s not a feeling like seeing the 100 feet tall tree right in front of your eyes. Rockefeller Center is also filled with many stores, Anne Taylor, Anthropologie, J. Crew, Michael Kors, and the Body Shop just to name a couple.

The Rock Center Cafe serves breakfast, lunch and diner and is well known in the Rockefeller area for being one of the best restaurants. The Cafe is also a landmark and has a lot of variety for food choices, some of which include seafood, burgers, housemade pastas, and steaks. 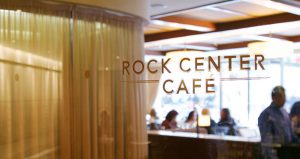 Grand Central Station became the biggest terminal in the world between 1903 and 1913. Today it covers 48 acres and 44 platforms, making it the biggest still today in the world. The musical performances, and diversity of everyone who crosses it, the interior design such as the ceiling, it’s famous clock, makes it a sight to go see. It’s historic value is also shown within the station. 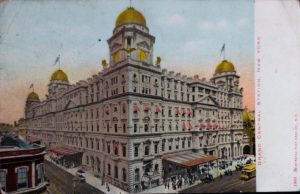 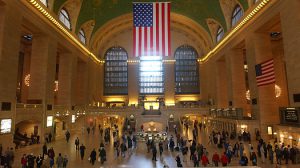 I had a great time at the Carlyle, it showed me a small insight on how I can achieve my goals to work/ manage a hotel. The speakers really gave an inside look on what they do and that also helped me decide toward what part of a hotel I would want to be in. I wish however that I had more time for the tour, I would have liked to explore more of the hotel and not just the rooms and bar but like the kitchen and such. Overall it was a pleasant trip.

Edited: I was overwhelmed with desire to study hospitality through my eagerness to be able to see fulfillment in a customer, my ambition of wanting to work in Hotels, as well as attending City Tech will help me strive to seek success.