This is me at Circa Brewing Co. I’ve blurred my face since I don’t like taking selfies.

For my project, I went to Circa Brewing Co. The person I spoke to is Drew, who is the head brewer. He has taught me a lot about beer and the malt used for making it.

Circa likes to stay local, so they try to get their supplies from local vendors rather than large chain suppliers.

This is malt. It is a grain and can be replaced with wheat or oats. There should be a 10% moisture level to maintain quality. If you eat it just like that, you’ll taste a burst of sweetness for a few seconds. After that, it starts to taste bitter due to the tannin. The malt has a smooth texture on the outside. When you chew it, its rough like cereal. Malt tastes dry. 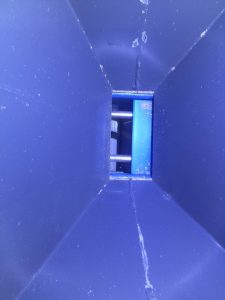 Inside of roller mill. 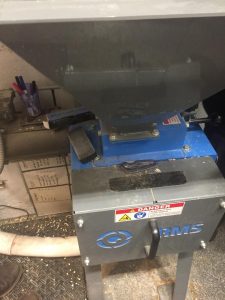 Outside of roller mill.

This is the inside and outside of a roller mill. The aren’t any see through parts on the outside so I couldn’t get any other pictures of the inside. It grinds the malt and separates the shell. It is hooked through a pipe into a hot liquor tank.

This is the hot liquor tank. This is where the ground malt goes to. It is important to know that a lot of water is invested into making beer. An example would be needing 2-3 cups of water to make a cup of beer. Since there is so much water being wasted (low yield), Circa tries to reuse that water for things like washing. The water can also be sterilized so it can be reused. Recycling is a big factor in the beer industry.

Above is a picture from Circa’s website. I’ve circled the kettle in red. There are slats at the bottom inside the kettle. The slats allow water to drip out. After the sugar is transferred, it becomes what we call wort. The residue left behind is sugarless and rich in protein. You can mix it with water and eat it like porridge. The kettle is hot, so it also sterilizes the sugar water. After the kettle is done processing the sugar out, you get wort. That wort is ready for hopping and boiling. The kettle takes about 30-60 minutes. It can make the beer have higher alcohol content, because it makes liquids/mixtures more concentrated. 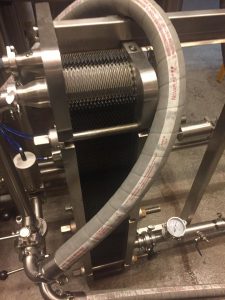 This is called a heat exchanger. It is hooked to a tube, which can transfer beer into the conditioning tanks. The exchanger helps keep the temperature of the beer the same while it is being transported. Wasted water goes back into the hot liquor tank. The beer in the conditioning tanks are left for aging. Co2 is hooked to the tanks and the smaller the bubbles, the easier it can be absorbed. The Co2 is for the carbonation levels. From there, the beer can be canned or put into a keg.

There are 2 categories of beer, which are ales and lagers. Ale beers use top fermenting yeast, which is good at 68 degrees and lager beers use a different type of yeast at 53 degrees. A major difference between these two is the time required for production. Ale takes 11-14 days while lager takes 30. You can put the yeast to sleep at 33 degrees. The yeast can be used for several generations, but don’t use the same batch too much or you’ll get mutations. Yeast is used for fermentation.

Drew mentioned something called the NY State farmville brewery bill. This bill serves to help increase demand for local products  and encourages local businesses. One of the rules on the bill is “January 1, 2024, no less than 90% of the hops and 90% of all other ingredients must be grown in New York State.” As you can see, this has a major positive effect on locals.

Circa practices the grain and hop farming. Hop can come from Yakama Valley (Located in Washington), Idaho, and other areas.

In terms of quality, some beers are cheap and others are more exquisite. The quality can affect taste and aromas. Some can taste like bourbon, water, etc. Essential oils in hops can give fruity flavors in cold beers, which people seem to love. Not only to the tongue, but beer can also be fruity to the nose. These flavors aren’t present in non-cold beers, because the flavors evaporate if boiled. Beer can have different styles and can be full-bodied, light, or etc.

There is a beer judge certification program (BJCP) for judging beer quality.

Circa is special because it has some of the freshest beer in NYC,strives to make something enjoyable, but not too overwhelming, and wants to have something for everyone.