The vineyard my classmates and I decided to visit for this project was the Franklin Hill Vineyard located in Bangor, Pennsylvania. The vineyard belongs to the Lehigh Valley AVA and features a mesoclimate similar to that of northern Europe giving way to produce French-American hybrid grapes. Their climate is mainly “influenced by the area’s proximity to the Atlantic Ocean and the Chesapeake inlet” (Simon, pg. 132) that ultimately moderates the climate of the AVA. Despite the size of the AVA, only about “500 acres are used under vine despite the AVA growing steadily” (Sokolin, pg. 56). Initially however, as explained to us during our tour there, the land that Elaine Pivinski, founder of the vineyard had bought in 1976 was actually not suited for grape production. The land’s main issues were the soil of the area as well as the land being too flat and plain-like featuring no hilly features to expose the grapes to sunlight evenly. Luckily enough, she was able to discover Cornell Geneva’s vineyard experiment program which helped her with starting up her business by introducing her to their grape experiments allowing her to grow in these areas. Despite the risk behind running her business based on these newly invented grapes, she went through with her goal of producing wine in Pennsylvania successfully producing 3,500 gallons of wine in her first year. She was then hit unfortunately with a long period of lack of rainfall as well as a struggle to sustain and expand her business with no viticultural experience and virtually just working by herself. Through meeting with Bonnie Pysher and recruiting mothers at school bus stops, she was able to obtain the help she needed and pull through these times. Today the winery has expanded from where it once was producing around 55,000 gallons annually. 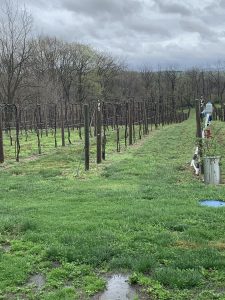 The “old vines” at Franklin Hill Vineyards. The trickle irrigation system in place was used in times where rainfall was lacking.

During our tour, Helen who was our tour guide showed us just how much Franklin Hill Vineyard really had grown since 1976 showing us the “old vines” which were the surviving vines from 1976, and showing us the trickle irrigation system that they had implemented in order to sustain the vines during the period that had no rainfall. She then showed us their more recent vines featuring a five-acre field of 7-8-year-old grape vines and another fifteen acres they are currently working on. She explained the importance of the shale like soil used to grow their grapes as it eliminated the competing grass and greenery from stealing their resources as well as allowing the grape vine roots to grow more openly. During our visit there we were able to observe the very beginning of the bud break stage of the vines and was told that harvest of these grapes usually occurs during the 2nd week of September. They grow a variety of grapes including Vida Blanc, Chambourcin, Cayuga, Chardonnay, Zinfandel, Cabernet Franc, Pinot Noir and Cabernet Sauvignon. 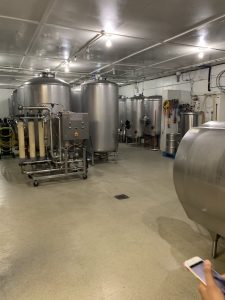 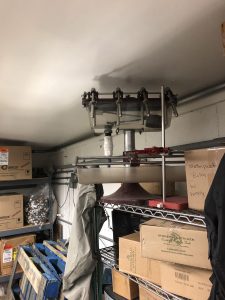 A handmade bottling tool that they used back when the vineyard just started. 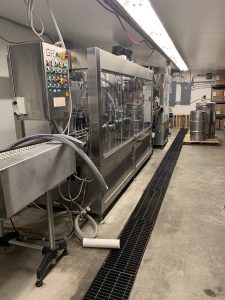 An automatic bottling tool that replaced their old handmade tool and caps their bottles with screw caps.

We were then bought to their vinification facilities where again we were able to see just how much the vineyard had grown as a whole. The facility was split into multiple rooms and were essentially in order of when they were added. The first room featured Elaine’s first processing area featuring multiple tanks and filtration systems as well her “refractometer and the more old fashioned hydrometer” (Ewing-Mulligan, 2006) they used to measure the Brix levels of their grapes. She explained that the vineyard produces red, white, fortified and rosé wines on top of their specialties and uses stainless steel tanks for their fermentation, where they found that ultimately using neutral barriques in the past wasn’t able to sustain them through the demand for their wine. Most of their wines are blends and feature an alcohol level of 10-12% except for their port wines which fall around 20% alcohol level. Before obtaining their additions to their production facility, Elaine had produced all her wine in just that one room containing a singular destemmer, multiple stainless-steel tanks and a filtration device they had obtained from Germany after finding our just how unsustainable using paper filters were. When they had initially started, they bottled everything using a handmade bottling device and corked each of them by hand until obtaining their bottling machine and switching to screw caps. We were shown pictures of Elaine and her crew punching down the cap and Elaine learning how to use cold stabilization for one of their wines called Evanswood which featured tar traits and also how they use oak staves and chips as well in their wine production. 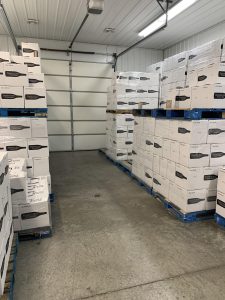 Finally, we arrived at the tasting room where we were able to taste six different wines. The wines I chose were the White Jade, Katie’s Creek, Redhead, Sir Walter’s Red, Catawba and Cake. Out of these six the one I enjoyed the most and found the most interesting was ultimately the Redhead which was a blend of Chambourcin and Merlot and was dry to the mouth with a strong vanilla and oak taste to it. Another wine that was also interesting was their vineyard’s most popular wine called Sir Walter’s Red which featured a blend of Cabernet Franc and the Concord grape producing a grapey acidic wine that tasted like strawberry jam. 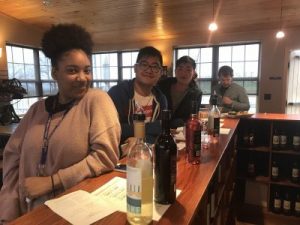 Sitting in for a wine tasting at Franklin Hill Vineyard.

After visiting Franklin Hill, we also visited M&M vineyards as well afterwards which was about a 10 minute drive away. While much smaller and newer than Franklin Hill, the owner Mohinder Sidhu and his wife who were both previously microbiologists pushed themselves to achieve their dream of opening a winery prepping their land for 7 years after an initial 2 years of research. They were able to transform the corn field that they had bought into their dream winery using different soils as well as creating 15 degree slopes to provide equal sunshine as well as grafting different vines to the rootstocks they had established. 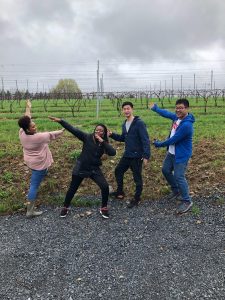 Standing in front of the vines at M&M Vineyard. 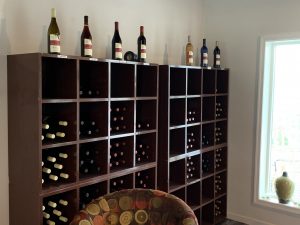 Overall, visiting the vineyard really put into perspective everything we had learned in class and learning about the of history behind Franklin Hill was definitely an experience. Being able to meet Bonnie and listening to her stories of how she and Elaine self-taught themselves how to survive in the business as well as learning all there is to know in the winemaking business was truly phenomenal and is definitely someone you should talk to when visiting Franklin Hill vineyards.