36 Hours on the Brooklyn Waterfront

The Brooklyn Waterfront a park that own historical things to everyone who really are interesting on history.

Brooklyn Bridge Park, as we can conclude is located in downtown Brooklyn. This place gets a thousand of visitors every single year, and one of the main reasons is because it has a splendid view toward the Brooklyn bridge and Manhattan. Including other activities like picnic, free movies with an excellent view, special events, and even kayaking that is one of my favorite activities when it’s available. Additionally, this area also has an excellent area where we can find historical moments and where this can be appealing to those like me who are interesting on historical monument. 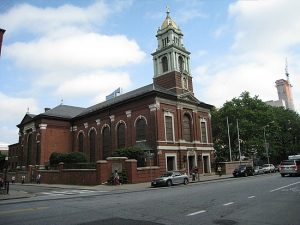 St. James Cathedral Basilica is located at Jay St between Cathedral Pl. and Chapel St. this church was building in 1853, but where this was replaces in 1903 because this church was severely damage by a series of fires. It was built by Bishop McDonnell who also introduced the term Pro-Cathedral in conception of All the Saints and Bishop Loughlin High School. Furthermore, this church was visited by the Pope Saint John Paul II, who was the first Apostolic who visit the United States of America.

John Street Park is one of those places that Brooklyn Bridge Park offer to tourist and visitors an excellent view under the Manhattan Bridge, but where it also shows to us the history how oyster who used to grow on those area of the East river has eventually destroyed by urbanization and pollution. This place has been recognized by the big oyster produce in 1937, when the author Mark Kurlansky wrote and describe on his book how this place used the oyster were over-harvesting that killed the oyster industry in New York. The Lower Hudson estuary once had 350 square miles of oyster beds and some biologist others said that this place contained half of the world’s oysters.

Although, I was walking around and getting close to the Brooklyn Bridge, I saw two board that have a piece of information about an historical moment that took place here in Brooklyn Height. This was the battle for independence where the New England and British decided to concentrate their battle around New York City. where on August 22, 1776. Young George Washington was presented with an army of 9,000 that were facing 20,000 well-armed British. This place has a key piece of historical movement that help the United Stated to obtain the independence from their colonizers. 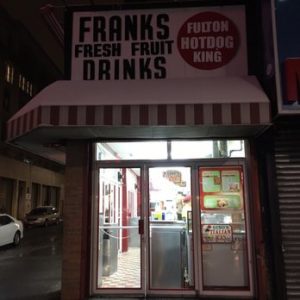 Not all the places at Waterfront or Dumbo are expensive, walking back to Fulton St. Fulton Hot Dog King, this location was opened in the past 100 years as one of the employees told me. This hot dog shop was a convenient place where you can find a variety of fast food on the store. Although, I’m not a big fan of junk food, the price was affordable. A single Hot Dog cost you $2.50 and the price increases depend of the type of sausage that you want. Additionally, they do also sell other product beside the hot dogs, they as well sell burgers, pizzas and fresh juices. Something that I will recommend about this place is the pineapple juice, which cost you $1 for a small cup and $2 for a large cup.

As I decided to bike in the morning, the Brooklyn War Memorial is a park that has a beautiful view where you can go and jogged, but where it really has an important significant of their statues that are build there in the park. This memorial was dedicated to the more than 300,000 heroic men and women of the borough of Brooklyn who served in World War II. Where inside is displayed the names of Brooklyn service members who died during this war. This is a touching place where you can feel a peaceful air and enjoy with your friends. 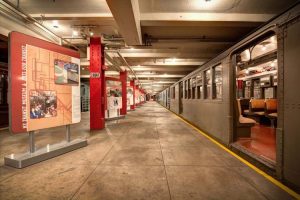 A few blocks down the Brooklyn Wat Memory Park, on Cadman Plaza W. at Livingston St.  we can find the New York transit Museum, where the admission for adults will cost $10 and Children (2-17) cost $5 as well for Seniors 62+. The museum was founded in 1976, where this place dedicated to informing to the visitors and keep the stories of mass transportation. Additionally, we can find how used to be the housed underground in an authentic 1936 subway station in Downtown Brooklyn.

the Prison Ship Martyrs Monument is close to the New York Transit Museum, which took us a few minutes to walk into this park, this monument was designed by renowned architect Stanford White (1853-1906). This memorial was marks for those men and women know as the prison ship martyrs, who were buried in a tomb near the Brooklyn Navy Yard. This park has an history that happen in 1776, the American Major General Nathanael Greene was watching the construction of Fort Putnam on high ground that is now part of this park. During the Brooklyn Battle, the continental Army surrendered the fort and retreated to Manhattan, and there the British held many prisoners that died of overcrowding, contaminated water, starvation, and disease aboard the ships.

One of the best parts of Dumbo is that we can find one of the oldest houses in Brooklyn with a value that still endure. I will recommend to any tourist who mostly love art or love to take pictures about our city, to go and contemplate the elegant that this historical house last through time. Its color and shape are something that caught my attention and I really enjoyed discovering this place because is near the neighborhood is quiet to spend time after college or a hectic work.

Arriving back to the Waterfront Park, I found out that there was a concert going on at the Bargemusic. At the set was Rira Sloan and Jonathan Feldman that were playing instrument while other were dancing around, I was somewhat interested because I didn’t know that much about the place. however, having some search I found thought that this place have a historical moment where it was founded by Olga Bloom that was 57 years old in 1976, she gave up her career as a violinist and violist to create this beautiful place that now is known as the Bargemusic. 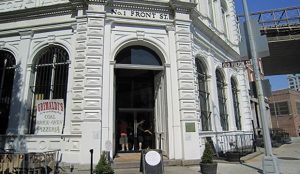 At starting the day on Monday, historic Grimaldi’s location under the Brooklyn Bridge, this place offers a spacious environment with two floor of dining accommodating. The shop has an excellent “secret recipe” sauce and a 100-year-old dough recipe, which make this Pizza that Made the Brooklyn Bridge famous. The price was a little bit too much that you can expected on other regular pizza store, but the services was one of the main points of it. The services were really clean that they even pay attention to any details while you are ordering.

The NU hotel was the place that I decided to stay because it was one of the hotels that have an excellent amenity, plus it cost less than other hotel that are around the area. The hotel room cost around $175 per room and the price variate depending on the type of room you want to get. Furthermore, this hotel was near to all the places that I was visiting which it was easy for me to take a walk or bike to all the location that I visited. Additionally, this hotel service a continental breakfast that is include on the guest amenities program fee.