We will be using the website listed below, to upload all GWC projects and details. Girls would work on this website to further improve it:

How cool is to mix up your hobbies with your career path especially if it includes the use of technology? There is so much we can take from technology and incorporate it into our lifes. Just like that we have Miral Kotb, who used technology with dance!

Miral’s dream was to become a professional dancer, but she also loved coding. As a student, these two professional paths seemed entirely separate to her. However, Miral did not settle for the status quo. After working as a software engineer at Bloomberg, she realized that the two seemingly separate worlds of dance and code could come together to create something magical. Eventually, iLuminate was born.

In 2009, Miral Kotb founded iLuminate, a dance group that uses wireless lighting programs to create explosive and colorful performances, and she serves as its CEO today. Since iLuminate’s debut on America’s Got Talent in 2011, the group has traveled across the world performing with The Black Eyed Peas and David Guetta, as well as starring in an Off-Broadway show and The X Factor.

In the video below, learn more about Miral’s discovery of combining dance and code and how she brings together her passions with iLuminate!

Below is a link of portraying some work of Miral:

Maria Paula Saba started with the simple question, “Do girls wanna wear light?” Using code and small, programmable computers called arduinos which we are also using at City Tech, she created the first programmable jewelry prototype. After seeing how her idea inspired young women, she went on to create a product called Jewliebots, which makes codable jewelry accessible for girls of all ages.

Her business, “Jewliebots”, was successful, but to have an even larger impact, she joined forces with two other female technologists. They refined the product and began to sell the product under a new name, “Jewelbots.”

Just like Maria we can turn our ideas into reality. Its just the matter of time taking a step towards it. There is so much that you can do with technology now days, that it has no limit. It can be used to our full advantage, to create something big and successful.

Watch the video below to learn more about Maria’s vision for wearable technology and the infinite creative and educational opportunities for jewelry.

So you’re ready to start coding? Awesome! Did you know that there are hundreds of different coding languages in the world? Each language is a little bit different and can be used for something special.

To help you get started in your exploration, a few languages are picked out that are great for being creative and are easy to start building with quickly. No matter what language you choose for your project, you’ll leave with a better understanding of the building blocks of programming. That way, if you choose to study other languages later, you’ll have a strong foundation to start from! This program could be your first step to a successful career path. 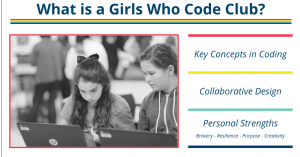 Girls Who Code program is not only a program to learn coding but turn your ideas into reality. Its a platform that’s being provided to you at no cost, so why not take advantage of it? GWC program will have clear, step-by-step sections that will help you unleash your inner computer scientist! So no need to worry about if you haven’t done anything of this sort.

Following are certain steps you would follow throughout the program:

Girls Who Code is a well recognized non-profit organization. We need more volunteer facilitators (city tech students and alumnae) for City Tech Girls Who Code Club. If you can spare one hour per week as GWC facilitator and are willing to pair up with one high school or city tech first semester student to help them learn coding and technology through simple fun activities. As facilitator you become a member of that organization. Please join the official club ASAP at the following link.

https://hq.girlswhocode.com/
Process:
When registering for the City tech club use club code NY5550 to join as facilitator. GWC organization does a background check when you apply as facilitator, which can take a couple of days. Then the facilitators go through online training and are provided with official GWC coding and tech project curriculum to help them help a high school or fresh college student get introduced to technology.
Perks:
As facilitator you don’t need to know much in advance. Just need to have a passion for technology and willingness to help others learn about technology.
There is very good support and hand holding assistance provided by a live person at GWC HQ. You can add this to your resume that you are a Girls Who Code volunteer facilitator, and you get a GWC  certificate.

This is a sample project built by a student in the Girls Who Code Club!

“We created an adventure game using Scratch inspired by Ayanna Howard. Ayanna is a roboticist and Professor at the Georgia Institute of Technology. Ayanna’s proudest moments came at NASA working on the mars rover. She used artificial intelligence to program the robot exploring mars. Now, she researches new ways that robots can expand space exploration and assist people on Earth.

Developing this adventure game in Scratch required more steps than our previous Animation Project. We used a lot of conditionals and sprites to make our animation work! It was fun creating a story and seeing our end project. We hope that this project serves as an inspiration for the next roboticist in the world.​” 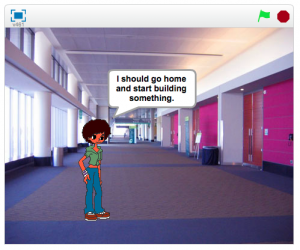 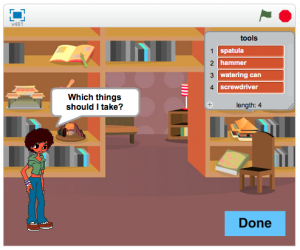 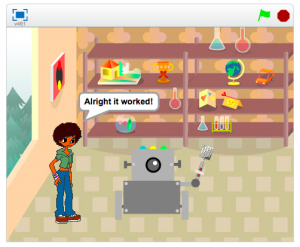 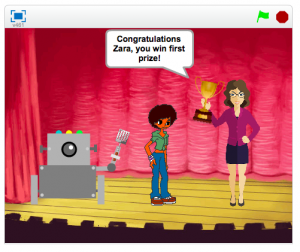