The visits to the Brooklyn Historical Society were always different and full of learning because it gave us some time off from being in a classroom and actually getting a hands on experience. We looked at books and many letters from people that recorded events in history. Most of the events recorded, took place in Brooklyn and the writers got every single detail that they could find out from people that were present at the moment of the event. One person that did this was Gabriel Furman, he had many diaries that held different events that happened during his lifetime. 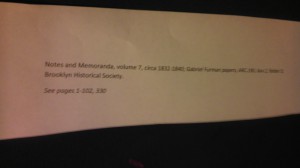 The readings that we did there were all from really old books or diaries that historians kept for many years and were eventually gathered up by the BHS. We also read letters and other documents like receipts to find out roughly how much people were making back then. Reading is not all we did though, we also looked at many maps that showed different views of NYC and the ethnicities of people living here when the map was made. 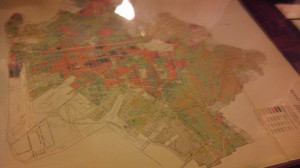 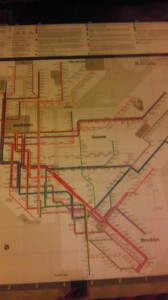 Subway maps also looked very different before because there weren’t as many subway lines as there are now and it wasn’t very tourist friendly so people that weren’t from around here could easily get lost. It looks fairly plain and lacking information to help people get to their destination.

When you get a first look at the building from outside it looks older than the buildings around it. It has a different style to it than the newer buildings and one thing that shows this is the arched windows, something that buildings don’t have any more. The building also has carved heads on the side from people that no longer exist, so the building is pretty old. 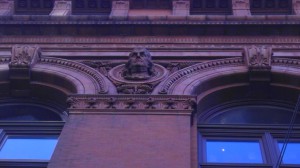 The whole outside of the building is brick which gives it an orange-red color. The color of the building makes it stand out because the other buildings around it are mostly gray or just glass. When you walk in, it looks very modern but when you reach the stairs, you get that smell of old coming from the wood that squeaks and makes loud noises when you’re walking on it. 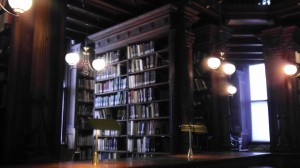 The library is on the second floor and I will never forget the rules before going into the library, take out a pencil (not pen) and sign in. The library had a very old look to it as well, the whole library was made out of wood and it all looked like it was the same color. All the shelves were packed with a bunch of books that all had their own story of how they got to the BHS.

The way history is recorded has changed over the years, before television and the internet people wrote the story down on a piece of paper and that piece of paper is the only evidence that we have now of an event that happened. In English class we read a story of a women telling a story that she read in letters that were being sent back and forth between two people. The letters were from Lucy Kolkin and her husband Alfred Kolkin that was in a war and the only way they could communicate was through these letters. While in the BHS we got to actually read and touch one the letters that they exchanged throughout this time in their lives. There are a lot of letter that they wrote to each other but to look at just one of those letters is like I was getting into someone else’s business and invading their privacy. I wouldn’t want anyone to look at what I write to other people but I guess it’s too late now that the internet has a record of everything. 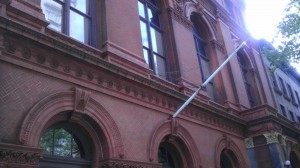 This semester has been all about fire and disease and in the BHS we learned a lot about a fire that happened in the Brooklyn theater and we also learned about the diseases that struck NYC and made an impact on people. Some of these diseases killed a lot of New Yorkers and Brooklyn was saved at times because of the Hudson River that acted like a barrier for diseases from spreading throughout all of NYC. These diseases came from Europe and other places around the world in ships that imported goods. Trading was one of the reasons why diseases hit NYC and killed many.

What this semester was really about though was getting to know the history of people in Brooklyn and the people who enjoyed to keep this information in one place like the BHS. The people working at the BHS were always friendly and willing to answer any question that came to mind. They knew what they were talking about and they liked to help if a student needed it. The conversations we had during the time being there, were always interesting and kept the students engaged in the arguments that were being explained. These BHS visits weren’t just English class, they were a time apart from the actual school, like a small trip to place that that was rich in history and had a lot of different stories compacted into one spot. The library there has so many books that a lifetime wouldn’t be enough to read them all. If I had the chance to attend class there again in the future I would enjoy it a lot like I did this semester.

This entry was posted in Student Post and tagged finalproject. Bookmark the permalink.