Occupy wall street has been a movement that sparked a worldwide idea. Its origin is the city we all love and know New York the capital of the world. No better place to start such a movement to stir up the big corporations and make them aware we have a voice as well, but there is many different points of views on a controversial topic as this.

The writers of this post is Matthew Lysiak, Christina Boyle & Larry Mcshane and where it is found is on the New York daily news website. The owner is Mortimer Zuckerman. Zuckerman has owned nydailynews since 1993 and he is also editor and chief of U.S news & world report. He ranks as the 147th wealthiest American according to forbes.com. 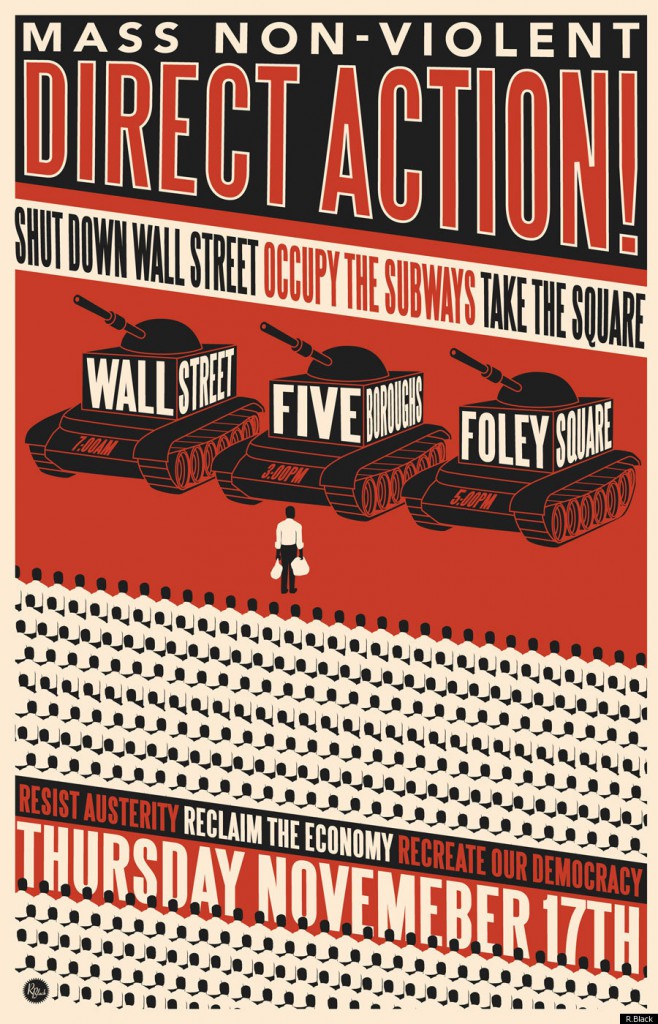 ews on the people around the marches in lower Manhattan. The people that are being interview all have different views and have different suggestions on to what should be the next phase taken. Mitchell Moss, NYU professor of urban policy and planning, thinks its time for the protesters to move to along to another area. He believes that they wore out their welcome, but managed to bring the issue of wealth distribution.  Anthony Lyons a Financial analyst thinks all this movement is just a phase. He goes on to calling them “jokes” and stating that this isn’t a movement just a “fad”. The argument that is happening in the article is weather did the protesters get stronger or lose their drive. Many people are being interviewed and asked what are their thoughts on the topic, this is a form of a rhetorical strategy. I believe this a strategy due to the fact on who they asked and what is their career choice. For instance I think that the newspaper is trying to make you sway towards slowly getting anti-OWS on the opinions of these more established people.

The writer of this post is Adam Hartung and is a posted on 11/18/11 found on Forbes website. Forbes is privately owned by Steve Forbes who inherited the company from his father after passing away. This article compares the Tea party and Occupy Wall Street on how OWS has become a bigger movement. What he points out in this article that OWS has become a force that has basically unavoidable and is now more relative then the tea party. Hartung still believes that there is no real idea on what the protestor want, but he states that it grows each day being more a appealing then politics. The rhetorical strategy he uses is showing that OWS has become more diverse including “blue collar workers, blacks, Whites, Asians and Latinos.” With it being more diversity it is more relatable giving it ” ability to raise money for its encampments, demonstrations and legal work” . Although he still manages to oppose their train of thought comparing OWS to aint-war protest of 1964(which were more organized).

The person who wrote this article is Greg Sargent which is posted on Washington post website. Washington post is owned by the Washington post company which is an American education and media company. This article was posted on 11/19/11 and talks about what Wall Street really thinks about Occupy Wall Street. He writes about a letter that has surfaced from lobbyists at the firm Clark Lytle Geduldig & Cranford, they are addressing this letter to one of their clients the American Bankers Association. What they suggest is to help start up a organization that tries to expose all of OWS flaws. They propose ABA pay the firm $850,000 to conduct their research, what they plan to do is find negative details and aspects of the protester and allied politicians. What their focus is to stop the democrats from trying to benefit from OWS as they state “Democratic strategists have identified the OWS movement as a way to tap this populist anger.” The rhetorical strategy they use is persuading them by trying to show its simple and they have well thought out steps. They mention that “it will be vital to understand who is funding it and what their backgrounds and motives are” they want to find this information so they can make a negative image of the resource of income OWS receives.

Ultimately I see OWS has been a huge success and has got under the skin of many people. After two months it has become nation wide movement from Oakland to Colorado and Boston. Although protestor are still unsatisfied and want to see more results, but the letter that has been sent to the ABA by the firm Clark Lytle Geduldig & Cranford shows they are actually getting somewhere. They might still be seen as unorganized or joke but politician see this as a gold mine or mine field. OWS has become something big enough to be a topic and have some affect on the 2012 Presidential elections.

This entry was posted in Student Post and tagged ows. Bookmark the permalink.