Inside the huddle of Occupy Wall Street

“…..be the change you wish to see in the world” was perhaps Mahatma Gandhi’s most essential message to the world.  A message that has been put into play by the thousands of people who Occupy Wall Street today around the globe.  The heart of the movement and were the protesting began two months ago is Zuccotti Park in the Financial District of New York City and only a few blocks from Wall Street itself.  The protesters who occupy the park consistently say they have long felt wronged by the corporate forces of the world and have gathered to express this feeling of mass injustice.  Even more they gather to let it be known that they stand together as allies who fight against this injustice and hope that others will join in order to make all their voices heard as well.  Many of the protesters have gone on to say if now isn’t the right time to start this movement, then when is it really going to be?  Occupiers understand that this movement is like all change at first “difficult”, but the future of a true democratic society requires its membe rs to get involved. 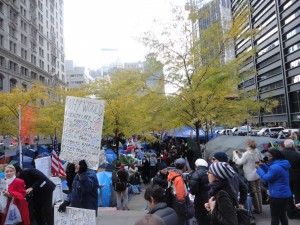 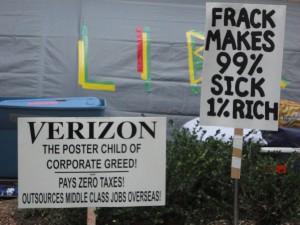 This pass Friday I had the opportunity to visit Zuccotti Park and talk to some of the protesters about the movement. The first person I spoke to be for I entered the “camp grounds or lair” if you will was Officer Watson of the NYPD who sole purpose for his shift that day was to maintain order at the park. I had asked Officer Watson, what he thought the protesters stood for to which he responded “these protesters feel, as they put it the ‘1%’ has too much power over the 99%, the protesters, and they want to express their ideas and raise awareness in an attempt to get things done.” That one-percent he mentioned is the wealthy population of the country who, as the protesters explain, are manipulating government, politics, basically any area which involves money. The other ninety-nine percent is the reset of the population, that have no say in the pretty much anything that ultimately effects them, is the group the protesters represent. In my opinion it should not  be said it’s manipulation to explain this matter, but rather that money plays a major influential factor in government policies, banker regulations, electing of public officials, etc., in other words the influence comes before the manipulation. 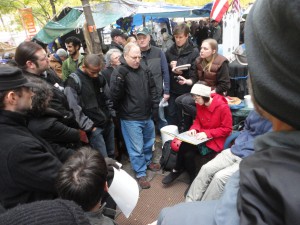 After my discussion with Officer Watson I turned my attention towards the site of the protest which only was some six feet away. Rather than immediately conducting another interview I took this time to observe the people with in the park and those at its perimeter. A common thing I saw was protesters playing songs that pertained to the movement as loud as they possible could. Another thing I noticed was the discussions held amongst the protesters, themselves and the non-protesters who were, like me, interested to learn more about their cause. In addition to the discussions, songs, pedestrians who walked the busy sidewalk and distribution of flyers were the young protesters that sat against the low masonry exterior walls of the park and held there cardboard box signs that read “we are the 99%” and “we won’t talk the abuse any MORE” while others simply displayed images.

As I stood at the corner block intersection of Liberty Street and Broadway I was able to hear the load voices of not only the people that surrounded the park, but also the ones with in it. This made me want to investigate beyond the borders of the camp, so I entered. I was overwhelmed by the fact that the protesters basically made sure they took up every inch possible for tents, boxes, tables, and so on with little space for passageways. Not to mention the people, this in all made the spaces very clustered and unconformable. In spite of the hazardous circumstances not long after I entered I came cross the first of many 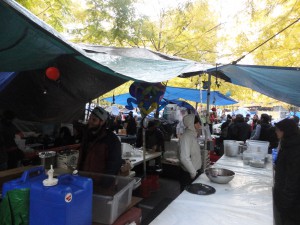 Think Tanks I would go on to participate in that evening. For those who aren’t familiar with the term Think Tank, this is a gathering of individual who discuss key issues as they express their interpretation and ideas while maintaining a form of respect in other words One-Mic. I was extremely impressed by this level of respect and the fact that not once did anyone interrupts the other even though their opinions differ substantially.

For the next hour or so I stayed and interviewed all sorts of protesters form the young college students to former Wall Street workers who left the corporate world after years behind the scene experience. When finally I decided to leave and began to exit I came across the main Occupy Wall Street information table, which was the formation of long tables connected to one another and were stacked with information papers regarding the varies movements the protesters represented. This was also the main location were people would come in order to officially join the movement or find out the latest news and upcoming meetings. Behind these tables were individuals who were more than ready to answer basically any question that pertained to the protest. It was then that I was informed about a web site called nycga.net or New York City General Assembly/Occupy Wall Street. This was only a direct effect from me introducing myself as an architecture student. The individual who was kind enough to equip me with such great resource also was quite helpful in educating me perhaps better than any of the previous people I had spoken to earlier. His explanation was part of the common theme I heard all evening, but perhaps he said it best as

“This is a cry for awareness. An awareness we want to…..yes, the people of corporate America to know, but more importantly to the rest of the on-lookers of the 99%. We urge them to join in and take their rights into their hands and not continue to watch as the 1% rolls over use like we have no place in the discussion table of our way of life, our lives. This is supposed to be a democracy, but how can that be if decisions are made based on the influence of money thrown on the laps Politian’s.”

Through the many interviews I conducted Friday afternoon a number of times the political involvement was discussed as a major factor in how things were run in the United States. There were instance in which some suggested that the 99% should stop electing the people who run with the most money that has been influenced by the 1%, but others argued that unfortunately although that would be ideal there isn’t enough awareness for this to accrue, while I argue in that perhaps the person with the most campaign money necessarily be the stringed puppet for lack of a better word.

In all the Occupy Wall Street has a significance value to society. I don’t agree with all of the ideas the protesters represent, yet again they do represent a large amount of things. But I do agree with the general message of fighting for a voice at the decision table and not allowing this injustice to go on a longer. I am very much interested in how this will pan out in the months that follow as we enter winter and wonder if the protesters would be able to withstand the cold weather or will they have to take refuge? Will there clustered two hundred tents be allowed to stay in the park or will they be removed by officials of the city, perhaps more interesting would be the level of involvement of the police. Never the less it was a great experience for me for I have grown to better understand the importance of hearing from both sides of any story in the pursuit of truly becoming a individual who can make his own decisions rather than be influenced by dogma. It is pretty clear to me that these protesters are being the change they wish to see in the world.

This entry was posted in Student Post. Bookmark the permalink.