Posted on September 25, 2011 by ronnyandread

People that start movements, that make people rethink whats considered normal and make them reasses their priotrities, are the people whos work should be considered important enough to archive. Banksy is a street artist whos speaks out, creates, and provokes. The street artist keeps his identity hidden as a way to keep the focus on his art and not himself. He has found a way to turn the urban escape into his personal gallery. Banksys art stimulates thoughts and broadens our view about what is already established. 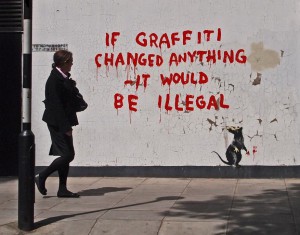 Banksy targets people whos peripheral view has been blinded. Similarly, in “Funes, the Memorious”, Funes ability to do more than organize his thoughts and think normaly, for his own benefit or entertainment, has been cut off. Although Funes had no choice, he comparable to Banksys audience because they live cyclical lives. People like Funes,  soak up all kinds of information wether its important or not, and at the end of the day replay the events in their head. They act in ways that according to social standards, they express their feelings in cliche forms, and they reuse the same methods over and over. Althouth there is nothing completely wrong with that, Banksy tries to make them question these activities. Through his art he tries to speak out against big corporations, the government and any other business giant that have in a way brainwashed the public.

“Hamnlet.doc?Literature in a Digital Age” points out that archiving things digitally may be risky because its as easily lost, disconfigured, and tampered with. Banksys art runs these same risks because its not protected art. Its meant to be temporary art but it has caused a movement, one so strong that his work should be archived so that credit is given to the person that earned it. Matthew Kirschenbaum , Author of “Hamlet.doc? Literature in a Digital Age” remind us of the importance of preserving special parts of history when he retells an event about how an original artifact lasted longer than  its digital copy:

Famously, in 1986, the British Broadcasting Corporation produced a digital edition of   the Domesday Book on laser disc. The format was rendered unusable in just a few years,  while the original has survived in legible form since the 11th century. What often goes  unacknowledged in that story, however, is that the original has survived not only because of the inherent physical properties of ink and parchment and paper — it has also survived because we evolved the social practices necessary to recognize its significance and keep it safe, in a climate-controlled, limited-access vault.

Someone as influential as Banksy deserves his work to remain long after its established date. He has caused something known as the “Banksy Effect”, by redefining art the way Andy Warhol did with  pop art during his own time. Banksy has inspired or attracted people to a different form of expression. By hiding his identity he influences people to think about the arts purpose. He’s used anything from spray paint and broken phone booths to canvas, which now sells for thousands of dollars. His intentions were not to sell his art but eventually he used even that, as a way to express how own thoughts about what is considered art. Kirschenbaum points out in his essay, how literary scholars play a role in decided how certain data is saved. In that same way, someone should be considering preserving Banksys work to inspire future movements. 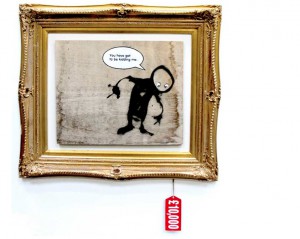 This entry was posted in Student Post. Bookmark the permalink.

4 Responses to Great Wall of Banksy