The technology world we know now was easy to adapt to. Going to a Technical College was a goal since I was in the 6th grade, but as I transition into college I soon realize that the connection between technology and emotion is larger than what it seems, specifically social media. The advancement in social media from MySpace to more popular applications such as Facebook, Twitter and Instagram has positively increased the emotional empathy for others. Emotional Empathy is the ability to have emotion such as sympathy or sadness for the situations of others and their problems. Because of this, social media have increased the notion of cyber bullying creating emotional empathy through the sight of someone getting cyber bullied. Another implication that provides the connection between emotional empathy and social media is when a dramatic event occurs. The 150 plus death toll in Paris that occurred resulted in over 6 million post on Instagram using the hash tag prayforparis to express emotional empathy. Whether a person watches news on television or not, because of this increase use of social media, a person is locked in on almost every event that happens. As people scroll down on their news feed, watching post or statuses, awareness starts with the emotional aspect of what a person is viewing. Knowing what emotion the thing you are viewing causes, determines its popularity. Emotional Empathy is not always a good thing depending on how a certain situation is, For example, if there is a conflict between two people and one person decides to express their emotions more on social media than the other person, even though they are right or wrong, the person who expresses their emotion more would have a better chance of emotional empathy from others thus bringing down the other person. 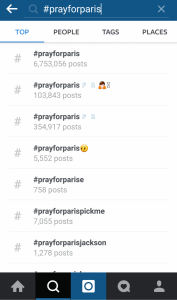 Cyber bullying has become a huge epidemic in the 21st century. The effects of cyber bullying can range from someone crying to committing suicide. Social Media has increase cyber bullying, but it has also help increase awareness of cyber bullying. Increased awareness of cyber bullying causes an increase in the emotional empathy of others. One article stated, “Cyber bullying in adolescence is gaining increased research attention because adolescents’ use of the Internet, in particular social networking sites (SNS), continues to increase rapidly. Cyber bullying victimization has been found to be associated with symptoms of social anxiety,” (Dredge, Rebecca, Gleeson, and Garcia 287). This statement by the article insinuates that because of the use of the Internet cyber bullying becomes a major problem in adolescents. In addition to adolescents’ connection with cyber bullying and social media, the emotion empathy of people from the cyber bullying of these adolescents has grown. Based on my own experience on social media such as Facebook, I have seen countless times views of people getting bullied by others online, but also have seen comments that were against the cyber bullying as you can see in the photo bellow. The first image shows a woman being victimized for having four kids at a young age. The “2015 car” represents the woman being young, and “200,000 miles” tried to imply that the woman was being very sexual active. The second photo showed people standing up against the hateful image. These comments exemplified how people are able to seek emotional empathy from other when being cyber bullied on social media. 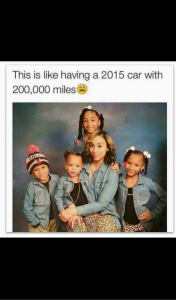 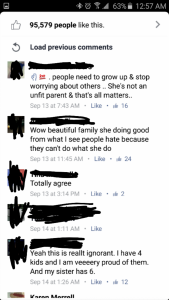 Dramatic events occur everyday. Before social media grew, the primary resource of information was television or reading the newspaper. Now social media is the news for everything, from catching up on a new celebrity to a committed crime. Social Media has been the main watch for news for about two years. My father watches CNN and MSNBC all the time and every time I come home from college he notifies me on what he recently watched, but little did he know I have already knew what is the latest breaking news because of social media. This information ties to emotional empathy and social media because unlike the news programs on TV, social media doesn’t hide, or choose not to hide the more explicit content. This is because social media such as Facebook want to create more emotional empathy that televised news cannot or fail to create. In a recent interview with my farther Swithin Laurencin age 57, I asked him various questions on how he started using Facebook for the first time versus how he uses Facebook now. Swithin Laurencin said that, “ When I first used Facebook, I used it only to chat with my family from St. Lucia because it was free and easy, but as time went by and got better at using Facebook, now I see many stuff on my newsfeed that I do not see on TV. I see stuff like women getting abused, somebody getting shot, and one time a beheading of Spanish woman”(Laurencin 12). I then asked him, what news makes you more emotional, news on TV or news on Facebook? He simply stated, “ The news on Facebook of course” (Laurencin para.14.). As time went by I started to notice my dad more active on Facebook because social media captures a person emotional aspect more rather than a visual aspect that TV provides. Swithin Laurencin being age 57 exemplifies that not only the new generation about age 25 and under gain emotional empathy from what they see on Social Media, but people much older creating an increase in emotional empathy.

Although seeking for emotional empathy through social media is overall positive, there are some instances when emotion empathy can affect other negatively. During my experience on social media apps I tend to see relationships getting broken, and arguments through the use of post. One my best friends name Usman Alli he suffered from heartbreak not to long ago. I decided to interview him on the conflict between him and his former girlfriend, and how social media played a crucial room in the emotion empathy of others. My friend answered by saying, “I loved her, but she decided to put our business on Facebook, and portrayed me as villain on social media. She said on her statuses that I broke her heart by breaking up with her, and didn’t really care for her. That was not true, but because I didn’t want people to know our business I didn’t come back at her for saying these things, which made me seem like a bad guy to others on Facebook,”(Alli para.5.). While Usman did not try to seek emotional empathy from others, his former girlfriend did. All the status that his former girlfriend provided, she was able to get good and positive comments saying things like it, “You’re a strong girl,” “You don’t need that boy,” “ He doesn’t deserve you.” Does statuses help her self-confidence, but Usman got seen as a villain towards some of his peers. This type of emotional empathy on social media can be very dangerous, and would not resolve any issue. On the other hand someone did receive emotional empathy, boosting his or her self-esteem and confidence. According to an article about Facebook comments tying with emotion it was reveled that Facebook had more positive comment vs negative. The article said, “The researchers did not see the actual content of posts, as per Facebook’s data use policy. Instead, they counted only the occurrence of positive and negative words in more than 3 million posts with a total of 122 million words. They report that 4 million of those words were “positive” and 1.8 million were “negative,” (Varma para.5.). Even though there are people being seen as bad, the overall comments its emotional empathy is positive.

As I grow older and try to build a name for myself, I tend to be more active on Facebook. Whether I’m posting about my life or sharing something sad, I use emotional empathy from others to gain likes. In my opinion most people do not understand the power of emotion. Emotion is what separates humans from any other species. We seek sadness, laughter, joy, pain and hope. All these emotions are what give people either the will to live or the will to die. As a college student, I have to surround myself with positive vibes in order to be successful. Social Media created a separation of personalities of others, one person seems to be happy on Facebook, and then in reality they are hurting. One piece of information a reader should get out of this essay is that negativity will never prosper.