For my video I used my Canon Rebel t3i and Adobe Premiere Pro to edit. Making this video was pretty new experience. It was interesting to take clips from a few hours of my day and creating them into a four minute video. With making this video, I feel better about recording out in public and getting to know how to edit a video for the first time. This project definitely opened up my eyes to film and creating videos that I like.

On Friday, April 15th, the class went to the United Federation of Teachers (UFT), Print Shop. We took a tour of their faculty and explaining what they do and how the machines they use everyday work. 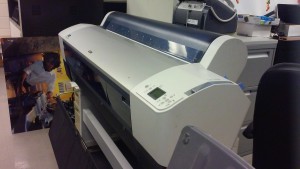 The first machine we saw was a very large digital printer. It usually refers to professional printing where small-run jobs from desktop publishing and other digital sources are printed using large-format and/or high-volume laser or inkjet printers.This allows for on-demand printing and to modify an image. The printer also allows for high resolution images to be printed out crisp and clean onto a variety of mediums. It was very impressive due to the fact that it allowed the print workers to save time and repeat the process many times without stopping. Next to this printer was an KIP C7800. (below) 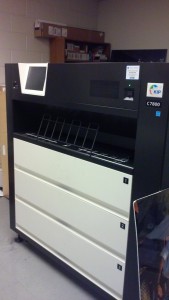 The KIP C7800 is a color and black & white high production print system. The system is a comprehensive solution for all types of wide format printing tasks that. The printer makes for high speed printing. 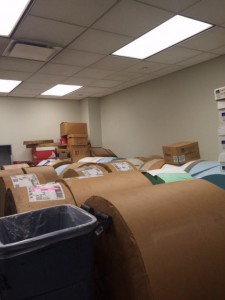 The picture above is of all the rolls of paper they use. This side of their work place was pretty interesting to me because it was kind of amazing to see all the material they use when I thought they used regular sheets of copy paper. It should also how much production they do if they need rolls of all this paper.

Overall the print shop was a great experience to seeing how print production operates. It showed how much work goes it what they do on the daily basis.

The assignment was to create three different concepts that convey the meaning of the quote, we chose, visually. The quote I chose was by Oscar Wilde, ” To live is the rarest thing in the world. Most people exist, that is all.” Oscar Wilde was know for his writings that have impacted many readers around the world. Many of Wilde’s quotes are thought provoking and just wants you to find the meaning for yourself. This is why I chose this quote by Wilde because it is sometimes true for everyone as we never really adventure for ourselves but just walk among everyone else. 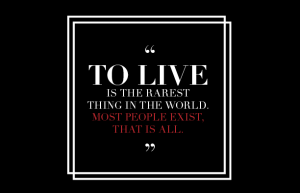 The first concept is simple and clean. I wanted the view to fully understand the meaning rather than be shown actual visuals. I decided to emphasize ” to live ” so it would catch our attention first and than lead on to read the rest. Also I chose to put outlines around the quote so it would just same as floating in the middle and to not just keep it black and white, I decided to emphasize the last words in red, so the viewer can really take it all in. 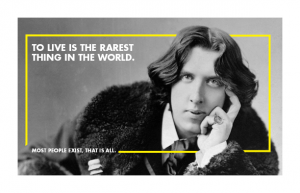 My second concept was to focus on the details. I wanted to showcase the author in a way that wasn’t to overwhelming. So I kept his picture small and with white border to keep the eyes focused on the center. Then I created a yellow border to make the viewer read from the top left and bring back around to the bottom left and author.The font used is Futura Bold because I wanted the quote to stand out from the black and white image. 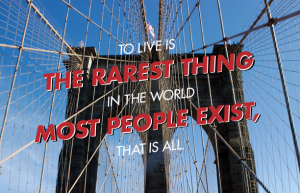 In my final concept I wanted to showcase the quote itself in front of this photo of the Brooklyn Bridge, I took. I placed the quote in the center and kept the photo symmetrical , so from each corner you bought into the center of image. I used both Futura Heavy and Light oblique. I wanted to break up the quote into five lines each with three words to kept it balanced. The first, third, and fifth lines are light oblique and white to weigh out the heavy bold oblique. I wanted the second and fourth to stand out because I believe that those lines are the ones impact the viewer more and gets the meaning across. As well I layered those lines in three colors so it would seem to pop out. The quote and image come together well.

The logo I created represents me as a designer. I love pastels and geometric shapes. The circles are placed together because I love the design it creates asa if to represent bubbles. Pastels are my favorite colors, they represent that not all designs have to lack color which is what I see a lot. Together it makes a simple yet pleasing design that I love. The C and P is hand lettered because I could not find a font that could form into what I envisioned. I wanted to show how the C and P can connect together and look like they were meant to be together continuously. This logo represents the simply yet clean design , I love to create.