This semester I learned a lot of new stuff. I did my first research paper and got to find out what I have to do how to write a research paper. I got to explore myself more and learned that i’m more capable of doing stuff than I thought I was. I did achieve few of my short term goals and got more closer to my long term goals by learning new ideas from my classmate and my professors. Over the semester I learned how to become a better writer and got more creative with writing which helped make a lot with my other classes too and in general. The surprises I was encountered along the way is the time management. Managing time is really different  in college than it was in high School. I learned how to push myself even when I was tired because missing any assignment would cause me more problems. Overall I learned so much this semester and I hope to learn more in next semester and hope I improve myself.

The research I did in unit 2 is about police brutality/ racism. This was one of the topics that has impacted so many people especially Aferican-American people. Their life was most vulnerable to this matter. Police brutality issue is one of the most important issues that’s been going on for over decades. Recently police brutality is happening more often than usual and people are slowly starting to normalize it. Recent death of George Floyd by the police causes a lot of anger in people which causes the protest. George Floyd was choked to his death by cops in Minneapolis. The cops name Derek kneed George on his neck and George was gasping for air for 7 minutes and he kept repeating i cant breath so many times but the cops did not listen to him and he ended up passing away. What caused people to rage? After hearing he could not breathe several times the cops did not listen to him, causing people to outrage because he was gasping for air and the cops did not let him breath. Events like this keep on repeating itself and we don’t see any changes to stop this. When we demand changes and protest the government is trying to stop us from protesting.

The reason why I’m targeting politicians as my audience is because they are the one who plays a critical role in government and they are the one who can bring huge changes in our society toward BLM movements. Politicians should be involved in police brutality problems because they have the government authorities power. The state government could increase police accountability by engaging with civil payout to victims of police violence in type of insurance policies. Passing this type of regulation will make people happy. Politicians have lots of data and information toward the issues. they can generate lots of money also they are the one who funds the police. The most important thing I want my audience to know is that a lot of innocent people’s lives are being affected because of these long ongoing issues. Every year a lot of families lose their loved ones who are innocent. This issue is emotional and it’s painful for people who go through it. They always live in fear. in order to reach my audience the genres I’m going to use are political speech and comedy. I’m going to use this genre because it’s a unique way to reach my audience and keep my text interesting. I want to tell my audience that they have a choice to make a difference and save a lot of people’s lives. They can bring changes that people had a hard time to do.

Do you like the world we live in now? Do you care about it? Well I don’t think so because why is that we see police brutality happening more often? Why aren’t there any changes? You use social media and you share posts about your favorite celebrities and other issues which are worthless compared to police brutality issues. It’s not that hard to spread information and learn more about police brutality. We all should work together and fix this mess that we created a long time ago with our own hands. This is not just about police brutality. This is about our communities its about our people specially Aferican-American people who are really hurt by this issues. Our innocent friends’ families who are suffering the most. Well if you like i don’t care, i want you to think what if that was you in their shoes you walking in the street and then you getting choked to your death for doing literally nothing. It can be any of your family members. If you dont care  do it for your loved one you never know what can happen. All I’m asking you to do is spread the word and help us bring changes to our society. Create better law. No one should be judged based on their skin color. All lives can’t matter until black lives matter. Police brutality can happen to anyone. We should start bringing changes and educate people more about this issue. Our communities are in danger and it’s up to us to fix it.

This speech is meant to inform our politician about the situation and persuade them to take action. For example, I talked about how many people including politicians can face police brutality and how it can affect any of us. Also I touched upon how people may be affected by police brutality including their loved ones. When it comes to their loved ones people will do anything to keep them safe. When you say it in a concerning tone it gets to them even more.

With this short comedy I’m trying to covey is police brutality is a serious matter and even people like Seaton smith is scared of police movie because of police brutality. This comedy is a fun way for younger base people to take police brutality seriously and take action and bring changes. This is mainly for youth because comedy is the best way to keep them interesting and teach them about the topic.

What really got my interest in this topic was the death of George Floyd and all the protest that was going on after George floyds death. I was really inspired by the Black Lives Matter movement. After watching all those protests and doing some of my own research I started to question myself that why is this same issue repeating itself for over decades. What started this. Why isn’t the government taking any cautious step to prevent this issue and a lot of other questions that started to come up in my head. I decided to write in political speech and comedy as my genre because I think these are the best way to reach my audience and explain to them what’s going on and what I’m trying to make them understand this way they can bring changes in future to help us with police brutality.  I chose politicians as my audience because if I could get my point across and educate them more, they could help us bring changes and pass new law to protect us from police brutality. Politicians are the one who can bring huge changes because they can control the funds for the police and also they can pass new laws. I decided to talk about this topic in my research because this is a serious issue that involves lives with it and a lot of innocent people are suffering from it. The main purpose for my pieces is to get answers to the questions I have and hopefully to educate some people through my writing. For my genre I made a speech by myself and then later tried to explain it. One important part was that “people will do anything for their loved ones”. I hope I got to my audience by my genre. What I would do differently is nextime i should try to interview people who dealt with these issues. But however I hope that my audience understands the main point and I hope to see changes in future and no one should live in fear. 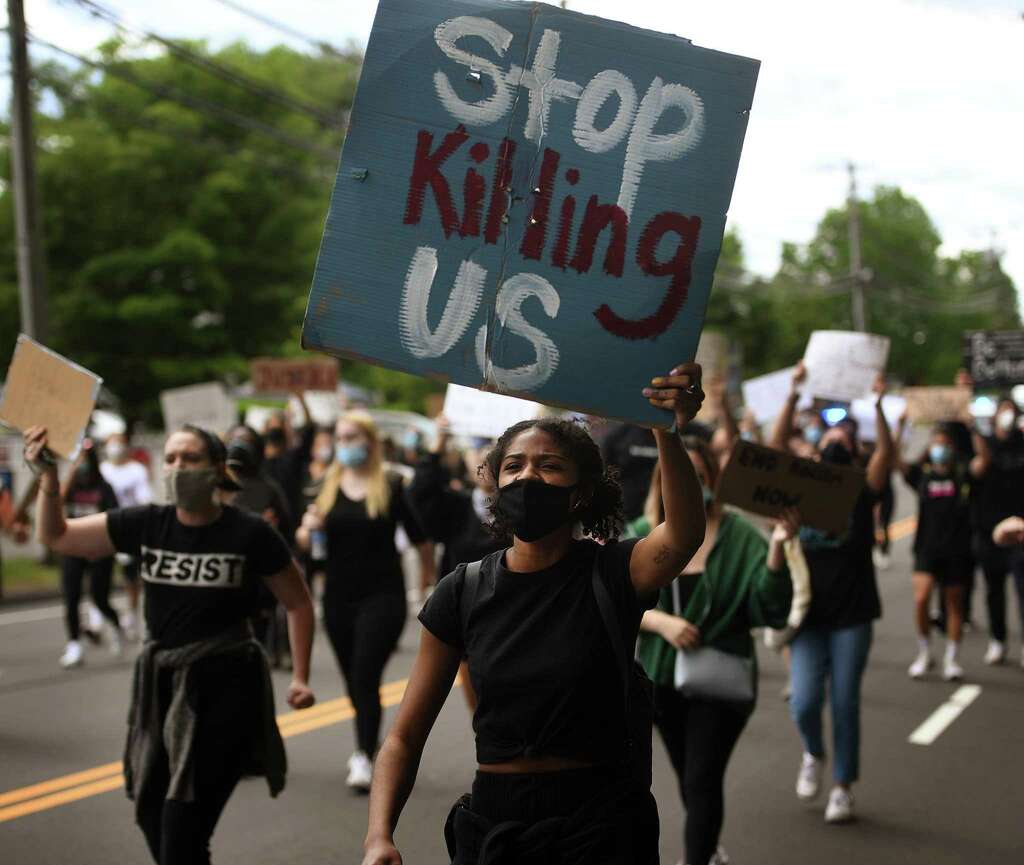 Protestors march up and down the Post Road chanting slogans in a Black Lives Matter protest in Westport.

Police brutality/racism is an emotional and important issues to talk about to some people. This issue involves lot of innocent peoples lives with it. Some people has a lot idea about police brutality and some people does not. In this unit I want to teach my audience the history of police brutality and why this issues keeps continuing and which color of people are being effected by this issues. The audience I want to reach is the people who are against police brutality/ racism. I want to reach this specific group of audience because I think they don’t have enough information about police brutality/ racism and they haven’t faced anything like that in their life. If I target this people and give them a perspective of the victims through my writing I feel like they will understand more and the meaning behind Black Lives Matter and they will join the movement and demand for changes and stand up for those helpless people. The genre i’m planning to write in is Historical  fiction and political news.  The reason I choose these genre because these genre will help me provide accurate information and lots of graphs numbers to show my audience the difference that i’m bringing up about police brutality and the history. This will help make keep my writing short and interesting to my audience which will help them to be more focus and actually be more interested in learning about my topic.  These genre will also provide the statistics of police brutality and show if it went up or down which will play an important role in this issue. One of my concerns about finishing this project is that I hope to show the difference to my audience and hopefully they will understand the point I’m trying to prove in my writing.

Faculty: Use this widget to share your name, office hours, contact information, and a brief paragraph about this Course.