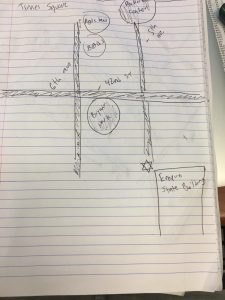 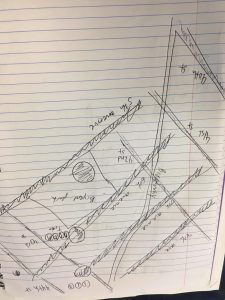 In my direction map I numbered my steps. My morning consisted of me walking to the train at a slow pace because i was early today, my neighborhood had a vibrant theme filled with kids walking to the public school, dogs being walked on my block, and medium traffic. I was tired earlier this morning but the commute to school was smooth. The train came as soon as I got to the station, it wasn’t crowded, I took a seat and humbly waited until my stop where i swiftly got off. I then walked adamantly to school just 1 block, then I took the stairs to the 6th floor and came to class. ryan-richards 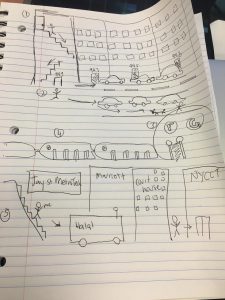 The block I chose was 42nd St. and seventh Avenue. I chose this block because I noticed there was a chain of diverse stores that were connected, Dave and busters, Applebee’s, and Modells, all were the main/biggest stores on the block. I also noticed the width of the sidewalk, the width of the sidewalk played a major role of setting I stage for the performance in which I felt one of the themes was convenience.
The performance in this area of times square had a number of factors.

The height of the buildings, create a feeling of being surrounded and towered over. The performance it’s self I feel with the people walking up and down the blocks, and in and out of the stores. It was continuous motion on the stage of the wide block and tall buildings. Elsewhere this could potentially be considered typical actions of civilians, however on this specific block on 42nd and sixth Avenue it’s considered a performance because of the atmosphere and stage.

The exact block is 800 feet long, and 200 feet wide. One of the reasons the block was built so large is so that it could be very commercial and busy, there are multiple businesses on the block such as a Hilton hotel, and Applebee’s, at Dave and busters, And A Modell’s sporting goods store all of the stores are there architecturally built connected for reason which I will further research.

The pavement was concrete, but smooth as opposed to the rugged concrete filled with rocks Etc. There were buildings on this block dating back to the 1950s. 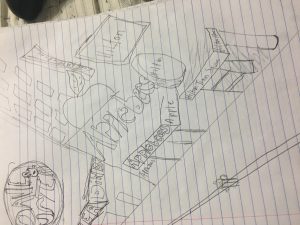 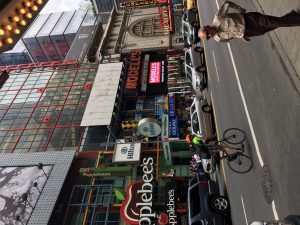 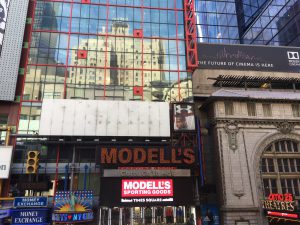 Lynch and Edensor  had similarities and differences. One major similarity these two have is that the emphasize the theme of identity. Both edensor and Lynch also mention structure, which is the relationship between the object and the observer .
The biggest difference I noticed in the two articles was lynches idea of building the image. Building the image is when the space is altered and affected, where as edensor mentions how there was an unplanned bricolage of structures and designs that provided for a contrasting aesthetic context, unlike Lynch is denser was stressing the beauty of untouched land and basically natural city geography. The overall theme I got from Lynch was focusing on the observer in the observed. Whereas Edensor focuses mainly on the art of tourism and how it’s a performance

The two articles have some similarities, obvious and subtle, they also contrast in the same way. The ways that they do relate,is that they talk of people in both articles. The cities and performances within them both need, people to continue to exist. Without tourism, or curiosity neither would be as functional as they are. A way that they contrast is obvious. They rely on the different aesthetics within the field to work, one relying on the location itself, the other on the people.