My favorite ending in a film would have to be the Prestige with Christian bale and Hugh Jackman. I think the story was great but the ending was really insane ad theirs a lot of room for interpretation. The revelation was that Angrier (jacks character) was making clones of himself every night he performed and his clone would die after every performance. Its symbolic in that his wife drowned in an act as well. I think it was done on purpose, every night he dies, essentially his clone the same way his wife did. And for Cristian’s character he had a double and they shared their lives together, ultimately one died and it wasn’t the original character but the twin.

Its fascinating to watch “Walt Disney laugh-o-grams, “Alice in wonderland” it was very funny.  The way the girl “Alice’,interacted with the animated characters was very entertaining. Her expressions was very lively and her expressions were very animated as well which reflected her interactions with the characters. My favorite scene is her running, I think it was great how they got her legs to run really fast they gave her qualities of a cartoon , and the cartoons human traits. I like the underlying story of her falling asleep and dreaming about a different world, the world of the animated characters. Young kids have an active imagination so its a great story to tell of a young girl conjuring up a different world because most kids could probably relate. What also crossed my mind was how they did it, all the work of hand drawing those cartoons and giving it life.it truly is an art, its difficult now and i can’t imagine how difficult it might have been back then without any technological advances like we have today. 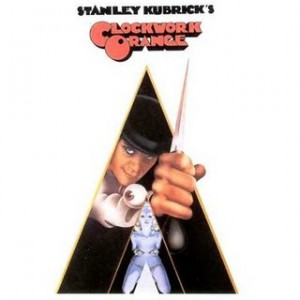 In the film A Clockwork Orange directed by Stanley Kubrick there are many reason to why it’s a controversial film. It’s important to take into consideration on the time in history that it was made. It was released in 1971, during this time in history, specifically Great Britain; there were many social reforms that were occurring. This time in history was an exciting time to be considering the fact that this was the time of growing wealth, widening horizons and personal liberation. People of this time had the chance to become liberal. There was a relaxed attitude towards sexuality brought in part by the widespread availability of birth control for young girls. There was also the banning of capital punishment and they had to put restrictions on drugs since it became a big issue. The film made such a big impact on audiences because it showed the main character, Alex and his friends, going about town raping, hurting others and doing drugs, basically acting out their every desire and its save to say they are psychopaths. It resonates with people because it’s a scary thought to think of having these kind of people our society.

Now in the film, there are many explicit sexual scenes throughout the film that conjugate sex and violence. To me it represented the sexual freedom of that time from young adults.  The group of young boys that go around town and steal, rape and create havoc, have undertones of juvenile delinquency. The film is packed with savageness and grim acts that really works well as a shock value. It gets the audience to react intensely to what they have just seen.  Also, by watching this sort of film their mind conjure up ideas and think about their society and their social issues. Social control is a topic that is relevant in any time, past, present and future. The film touches the topic of social control from the government and the idea that the government is trying to oppress people and have total and complete control over them. This is a continual worriment that we face and I feel this movie perfectly portrays that to audiences now in this day and age as well as back then. The film successfully makes the audiences question authority and an individual’s moral conduct. Along with painting American law enforcement as hopelessly corrupt and violent.