When contemplating the value of seemingly simplistic items that have been woven into the fabric of our lives, such as food, water, shelter and warmth, it is interesting to see how the Civil War soldiers were able to cope with the shortages of one or perhaps, all of these essentials. What is most interesting to me about the Civil War soldier’s diet is not the truly disheartening conditions they faced while fighting this deadly battle, it is the way the soldiers coped with these difficult times. While it could be perceived, coffee might have been the most essential item to many due to the natural stimulant, caffeine, I believe that the most powerful impact coffee had on the soldiers was the routine created by firing up a pot of coffee with their fellow soldiers. This habitual gathering of resources and the connection shared between the soldiers is what provided comfort and not only physical “warmth” to the troops, but an emotional warmth as well. One soldier stated in a letter he wrote home to his wife after she sent a care package with coffee, that “he was surprised he was still living,” and “what keeps me alive must be the coffee.” However, it has been discovered, many varieties of coffee and coffee substitutes didn’t even contain caffeine. So, how is it the soldiers could be living for and addicted to a substance, that often times didn’t even contain this magical stimulant? Comparing the life of soldiers from the Civil War to present time, while technology has made leaps and bounds with advancements, soldiers are still human beings. Those serving in the Armed Forces in the present day are still receiving care packages from family and it is this anticipation of receiving these gifts of food and supplies, that truly helps push them along through these difficult and lonely times away from home. The coffee was as necessary as a warm blanket and a comforting embrace. The ritual of brewing a batch of coffee gave the soldiers a reason to get up, to stay on schedule, to say goodnight and have something to look forward to the next morning.

Coffee has become a necessary evil in our present everyday lives, whether it is consumed during late night study sessions, early morning commutes, or after a big meal. It is obvious that coffee is second nature to adults of all age brackets and part of a worldwide cultural, culinary experience. In New York City, it is nearly impossible to walk a block in any direction without a place to stop and “fuel up” when you need a little extra pep in your step. We speak of coffee as a cure to whatever is ailing you at the time. Feeling a little run down? Have a cup of coffee. Can’t get through the mid afternoon slump? Coffee. Want a place to have a great conversation? Go to a coffee shop. This bitter, bold, rich steeped brew of roasted beans is the ultimate comfort food for troops and civilians across the globe and is here to stay.

Speaking of comfort foods, something I can’t live without is the sandwich, and since it’s a close tie for me between not being able to live without cheese and sandwiches, here’s a picture of a grilled cheese. Because, it doesn’t get much better than a buttery, salty, savory, gooey grilled cheese sandwich. 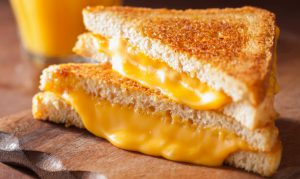 This entry was posted in #studentHW and tagged Cheese, Civil War, coffee, Comfort, food and coffee. Bookmark the permalink.