-Some genres that I feel more comfortable with is fiction and non-fiction, I can say that I learn them throughout my years of school. Every school year different genres were shown to read and write about. Their common rhetorical features is that both genres express information that may happen, just that in non fiction they state true information about specific ideas meanwhile fiction tells a story having false characters and false places.

-When writing I like to have the freedom to write because it won’t limit me from writing from what I truly think. However at times I think it is a good idea to follow a form of writing because it will get you to a point and it will help you organize your own paper.

An experience where I had to join a discourse community for the first time was when I was taken to Ecuador at the age of 12 to visit my family. It felt different for me because it was the first time I had to get involve with my family that only spoke Spanish. I tried my best to get involve in every aspect but it was difficult for myself. However, I was able to engage myself in Spanish after like a month or so, It was not easy but I did my best to learn it and understand my peers.

In this topic I  can say that ideas of discourse communities, genres and rhetoric does make sense due to the meaning it leads to. I say this because by understanding these main points it can help you understand the society that has a unique environment. Discourse communities is important because it helps you get involve in  a different environment/ culture where you can help introduce yourself to something new. Genres is something that is so known in school because of its different topics like fiction, non fiction, drama, and action etc. I think a very known one is fiction because typically fiction has been more in books because of its false stories made up ones.

The first thing I do when starting to do my google search is reflecting on what topic I’m doing and getting the base information of it. Than I tend to google the topic on google and click on different links to get more information for my project/essay.

In the past years, during school time I was always told to not rely on Wikipedia because it tends to present false information that can’t be approved by others.

In my perspective view I think I’m more like Susan because she gathers specific information at first  and than tends to choose what information is more valid than the other. She uses google a more common resource to help her find information base3d on the topic, which is related to my way of finding evidence from sources.

The differences between TSG and Grammer in Context is that TSG was being used to best educate students to learn grammar in an understandable pace by making errors and learning from those, that’s how we tend to learn. However, grammar in context is, “A description of language structure”, it is different than TSG because of its history, it has a history of using grammar as a way to understand speech. It followed the rigid rules of language correctness. However, from my own point of view, I have thought of grammar as a change among time because grammar can be learned more once being an adult having the opportunity to fix your grammar in certain ways. I feel that grammar is a big impact on our daily life and that it needs to be noticed in order to get better, however, grammar today is little recognized in society.

The rules for writing that I tend to notice before writing a piece is having to keep in mind that I need a 5 paragraph essay that includes the into, 3 body paragraphs and a conclusion. In addition for the introduction, I’ll need a hook that will catch the audience so they will engage with the writing. To end the introduction I have to state them. thesis what the writing piece will refer to. In the other hand what makes it hard for me when doing general writing is have to explain my evidence in my own words, I tend to get caught up in that part. As well as in the conclusion when I have to end the witing with a closing that relates to the topic and not wanting to repeat the same ideas.

I could relate myself to putting more effort into the intro because in High School I was thought that the hook was the big point in an essay when having to express your point of view. The hook is what catches the audience, its the first thing that people tend to read.

My goal for college is to receive the knowledge I need in order to succeed in all my courses with at least a B or above grade. In addition, my goal after college is to be working in a health profession field and to develop my career and be a registered nurse at some point. I see writing fitting into both spots because in college we have to take notes as well as having to do paper work such as essays ect,  which makes writing a must. Later on it will also be part of my job as a nurse because I’ll have to take patients reports down and keep it up to date. Writing is a must in both aspects.

I chossed this image with the nurse and a patient because I feel that Im a good listener when it comes to talking and expressing certain things among a person and I. 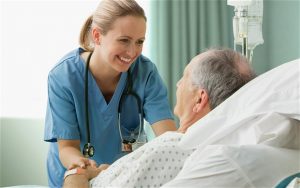