Ray Bradbury’s “August 2026: There Will Come Soft Rains” is a pretty bleak story. It is the story of what takes place in a home on August 4th, 2026. It is the last house in a ruined city. Based on the line “At night the ruined city gave off a radioactive glow which could be seen for miles.” (Bradbury 1) makes it pretty apparent that this probably takes place after a nuclear war of some kind. The house is completely automated. The animated short directed by Nazim Tulyakhodzayev takes it even a step further. In both forms, the poem, There Will Come Soft Rains by Sara Teasdale is mentioned and used to move the story along.

In Bradbury’s story, it seems that the world of man has come to an end, and the only thing left is our technology. The house continued to execute its schedule even without those whose job it was to care for. This remaining house was “an altar with ten thousand attendants” (Bradbury 2). Yet again, we find ourselves seeing religion as a theme of a science fiction story. The only living thing allowed back in the house is the dog. At 1 o’clock, the dog finally dies, looking at the fire. At 2 o’clock, the house seems to notice, and 15 minutes later the dog is gone, and the incinerator is activated. According to the schedule, the children should be home soon, so they couldn’t see that. 4 o’clock “was the children’s hour.” after all (Bradbury 2). With all of these things done to maintain the status quo for the house, it makes you wonder if the house has some sort of sentience.

As night begins, Sara Teasdale’s poem is read. It holds quite a bit of foreshadowing for what is to come:

Robins will wear their feathery fire and

Not one would mind, neither bird nor tree

“At ten o’clock the house began to die.”(Bradbury 3) This is when the fire starts, but its also the time that most would be in bed.  Bradbury paints a very vivid picture of the fire, and it seems almost as if it’s alive. The “fire was clever.” (Bradbury 4) The fire is like natures final attempt to get rid of this manmade travesty. As the house is destroyed, the recording playing the poem continues to play in the background. The nursery burns, destroying the images of animals, as if nature is destroying the ersatz animals.

Watching the short film based on this story, i felt as if the house had sentience. Unlike the story, the humans died in their beds. (Dozhd 1:41) It is raining outside, like the title of the poem, but it looks more like nuclear ash. The caretaker/machine plays music and shows a fake screen showing a sunny meadow where the window should be (2:36). When it is removed, you can see the nuclear ash outside. When they show the hallway with the radiation suits (4:23), it seems like maybe the family was alive for a bit of time after the radiation hit. I think this is even more proven to be true after the house blows up (7:45). Maybe this nuclear winter was caused by other houses exploding?

I wonder if maybe the machine was keeping them hostage? Like maybe it thought it was doing right by the family, but they were really prisoners. It seemed too overprotective of the family. I’m sure this was part of the programming, but the way the face looked, it was easier to relate to. When it gets damaged attacking the bird, it looks like its crying. Its also interesting to note that it destroys Christ on the crucifix and throws it away as if it’s nothing. (6:48)

After the music starts again, we see that the bird is now trapped (8:40). The machine destroyed itself after it heard the egg. The egg and bird could be symbols of the machine and its plight. By breaking the egg, it has broken itself. In the final scene, the bird is trying to escape to that place that it can never get to. There are no walls around the bird, but that is all it sees, similar to the houses plight.

Like i mentioned in my Blade Runner Class Discussion response, i recently read a graphic novel (Alex + Ada)  where androids are part of our lives. What i didn’t mention is that everything in Alex’s house is automated. The first few pages show him going about his day, and everything is catered to his needs. He need only think it and the house responds. It was a very similar situation to the house in “There Will Come Soft Rain.” 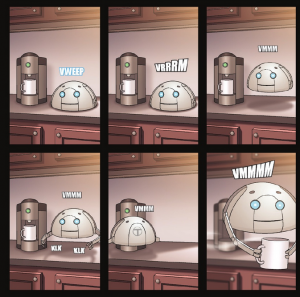 6 thoughts on “Nature vs Technology”