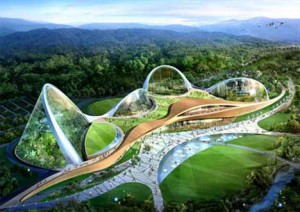 The day begins with music and ends with it too. No day can function without it. Everything lives through the music. Machinery roll with the according tempo needed to run. Faster machines need a faster tempo, so the people that love that sort of music were obviously chosen to work in that field. The world is a much simpler place now; no weapons for war and no colors to hate. Everyone is of the same shade and raised with the same values. The idea is of equality, it was understood within the population that everyone is to have an equal and reasonable way of living. If one person was to want something different or more then it would be analyzed by the only “higher up”in the community. This person is nor male or female and is completely impartial. This person is not seen as a god or form of mandate to the people. It is seen for exactly what it does, which is to analyze the suggestions of the people and see if it can be beneficial to the population as a whole. If passed then the entire community receives this upgrade.

As the days go by and the music continues life is in tune. Not one person disagrees with the other. Everyone greets each other and carries on with their daily routines. Life, in some forms is the same as it used to be. By this I mean, everyone can have their own business, career, or profession as long as it falls in tune and does not cause discrepancies. The people remain at peace and happy with this way of living therefore there is no violence or animosity against anything or anyone.

The land is very well taken care of, completely different then the years before them. The people believe in taking care of what takes care of them. One of the values instilled into the population as children. The grass is the healthiest shade of green and and the sky is the purest blue you can imagine. Just as the people take care of the land, they take care of themselves. Exercise is seen as part of the daily routine, although not obligatory. The land gives such healthy produce that each individual is eating healthy without trying; There are no artificial foods or preservatives.

Technology is far more advanced then ever imagined but the people do not rely on it. Human interactions are key in keeping this community healthy; all types of technologies have advanced, from entertainment to medical but all are used as a final option. Some technology went into the infrastructure of the buildings. To create a stable and safer environment.

For those who rebel against this way of living or are not in tune with society there is a place called “the pit”. The pit is not talked about or not even known about by the population. It is believed that some people are born rebellious/evil. This keeps those people out of the pure/safe society. The way these rebels are extracted is, once a crime or offense is committed the person receives an alert/mail/email for a meeting. This letter would be worded accordingly and in such a way that no suspicions would arise. The rebel would attend the meeting; be restrained and taken to the pit. The family of this rebel would receive a letter stating that they have moved to another location for work. In this pit there is no music and no light. The vocal chords of the rebels are taken out to prevent them from speaking to one another. The pit is meant as a reminder of what they have lost. A perfect world in unison never to be seen again. There is no torture, this alone eats away at them until they reach old age and pass.

2 thoughts on “The pastoral life”