In Part 3 ; Utopia of the Book Feed by: M.T Anderson, Titus is explaining in first person that things are back to normal, like nothing ever happened. He explains how he’s resting and his parents are with him, it seems like a pretty chilled vibe since he says he was on chat and sharing music. Later on, Him and Violet are talking about Quendy’s party as he picked her up in his parents up car. Violet says she hasn’t really been to a lot of parties because she was home schooled. “My Friends and i were all home-schooled, so we’re a mixed bag. Bettina’s Mother has us come over and weave ponchos.” -Violet (pg.78). Titus then explains to her more about what to expect in parties.

At Quendy’s Party, Titus says its pretty good but then he sees Link and Marty playing some game called The Cranky Tumble of Dark house. It was about zombies and mutants. Link and Marty were jumping and cursing. as the party goes on Violet decides to go over to Calista and say hi while Titus went to talk to Quendy. Quendy starts asking Titus all these questions about how if him and violet date. As she’s talking he turns around and looks at Violet and Calista, Calista seems to be mad but Titus and Violet chat in with each other. as the party goes on people are using the feed to share and listen to music and just play games and have fun.

As the book goes on Violet and Titus then go to the mall. Violet tries to tell Titus what actually is going on like how the feed might be watching them and everything they do, how it shows you only the things that are compatible with your personality and interests. She decides to prove it by going with Titus to different random stores and asking for the most random things. They leave each store without buying anything. on their way home Violet says that she got new things on her feed about the things she asked for at the random stores. Titus felt like this made her smarter than him and he felt a certain way. later on in the book he realizes she really isn’t, because she was always at home and she never really had the things she wanted that showed on the feed due to money or because her parents said no. In the book it says Violet would want a gun and since her father was against guns she would use things she found that had the shape of a gun. (pg.107)

Titus then starts to talk about the differences in schools and how Public school like back in the day his grandparents didn’t really learn anything about school. just how to do pointless rings but never to handle or do with life itself. Titus says the schools have gotten much better due to the fact that they are ruined by cooperations, human beings, not people who do it to take money away. Violet explains that her parents didn’t really have money to have a feed and her parents didn’t want her to have one so she got it when she was 7. she says that she feels like the feed makes you different and it doesn’t really make you who you are. it makes you ignorant, so Titus takes it the other way, he thinks that she meant everyone including him. Titus then talks to his mother about it and explains how he feels about himself. His parents decide to get him his own up car and they then make him feel better.

Titus meets violets parents but after that Violet starts feeling weird. Titus then remembers that she told him that she’s been feeling weird ever since the hack. Titus feels like he has to take her to the hospital so she can get her feed fixed. i think Violet is that girl that sees the world in a different way and she’s more open minded so i feel like the hack hurt her more.

Violet in my opinion is someone who is trying to make everyone open their eyes and realize that we don’t need the feed and trying to prove that its all about buying things and technology. As she tried to prove to Titus about it by going to the mall. i think she’s trying to make a good point on this.

The Documentary ‘Catfish’ Directed by Ariel Schulman talks a lot about an average guy named Nev whom starts falling in love with a Girl named Megan that he met through Facebook. At the beginning of the movie it all sounds so sweet to me that they seem to have this nice relationship through long distance. As time goes on in the documentary they seem to realize suspicious things and get to the bottom of things just to realize that what they were believing was all a lie.

My reaction to when Nev found out that Megan didn’t live in the farm that she told him about wasn’t much of a surprise to me, but when he found out that Megan didn’t exist and that it was Angela all along threw me off too much. I found it to be really pathetic to have lied about so many things just to hurt someone without “noticing”. I feel like this is a perfect example of why we must not believe in everything you’re told online. I felt really sorry for Nev because he really did fall for this chick named Megan who was actually a Model named Aimee and she had a husband and family. The image below of Nev holding a camera with the saying “Who do you think you’re talking to?’ seems like a good question to always keep in mind for when you’re meeting someone online. 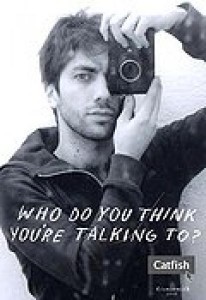 I relate this to “does Facebook Really make us lonely?” because this totally connects with the way that this documentary went, Angela, a woman that created fake accounts to satisfy her imagination of personalities she wanted to be but never could or images of her from her past. I feel like Angela felt really lonely because she was in her own little Facebook world she didn’t notice how badly she hurt Nev through Facebook. Angela did these things to make herself feel better she also didn’t realize she wasn’t living her life. She was stuck inside this fake online life and according to the text “Is Facebook Making us lonely?” it says “We gather less. And when we gather, our bonds are less meaningful and less easy.” There was a clip in the movie where Nev confronts her and asks her about Megan. Her respond was that she had Cancer, that she knew Megan and lived down town. She also mentioned that the girl in the pictures was a family friend. Clearly she had no idea about the girl in the photo, there was never a Megan and she lied about having Cancer. That proves that her bond with net face to face is meaningless than how it was online.

In conclusion of this Video Response Summary of ‘Catfish’ a documentary Directed by Ariel Schulman seems to be a great video to watch to show that not everyone online seems to be what they say they are and its really shocking. Angela clearly is a good example of how people can disguise there face behind a screen and show another one. How people seem to life a visual life instead of making a real one.

So I finally got to access Open Lab 😆  and i feel like its fair to write a little bit about myself since i recently started this course. Well my name is Evelyn and I’m 18 years old 😕 . I was born and raised in Park Slope, Brooklyn NYC. I’m not planning on leaving. Art has always been my passion, i love to draw and I’m all about creativity. I really want to be a graphic designer because I want to shower the world with art. I want people to know me for my art work and most of all see what i see the world as.

My parents are both Mexican/Spanish. Im not ashamed of my nationality at all, i actually love the culture and everything to do with where my parents came from. I have 2 annoying brothers so sports and video games is kinda my thing but i have a girly side also. On my free time which is barely lol i sing on friday or saturday nights in front of decent crowds. I attend music class at small private school. I feel like my life is all about music and art. Drama isn’t my thing. Music wise; the one and only person that inspires me to go on with life its self is a man i met 2 times in my life by the name of “Abel Tesfaye” a.k.a The Weeknd.

His music has saved me and kept me going since 2011. he inspires me to get up and do something with my life and not care about what anyone thinks of me. he gives me so much strength through his music. the list can go on and on about how much him and his music means to me.

I Graduated from Sunset Park Highschool August 29th 2013. I slacked so much Senior year due to the issues i had going on. 🙄 at least i graduated and started college. I really did want to come to City Tech because it seems like a good school to grow from. to start. im very anti social and shy 😳 but i have to grow out of my shell and i feel like college will help me. Im actually glad i get to start over now, new school, new everything. I hope you actually read this and got a bit closer to meeting that new girl in the class that just walked in. 😐