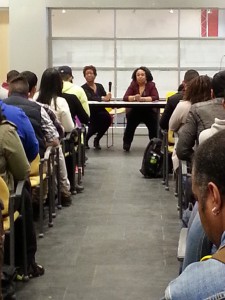 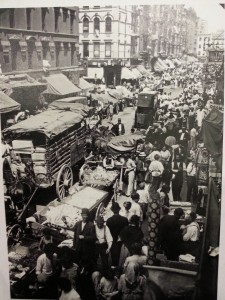 Hester St. back in the day 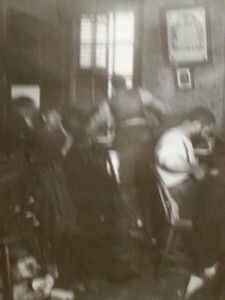 I somehow managed to attend the discussion on the play, Intimate Apparel. Although I did not make it on time, I managed to arrive as soon as two professors we doing a sort of Q and A kind of thing. The two female professors were very motivational speakers, at least that is how I was interpreting their tone of voices as. Especially the one on the left, she really stood out to me. I don’t really understand how is it that she stood out, but she did, perhaps it was her voice and attitude towards the discussion and questions that were being asked. A lot of the questions that were being asked really reflected on themes of the play. “Every character want the same thing, they all want to be married, they all want love,” Professor on the right. “Migration, emigration…what does it mean? …Class desires. They all live in NYC…want students to think about how black women lived in 1907. She knows how to navigate…Various themes…She is a seamstress, how does a black woman who’s illiterate navigate through this city.” Professor on left. The two professors both spoke about the female character’s desires and ambitions I believe, and how they want to rebuild new identities.

Afterward, they speak of the character’s identities and purposes in their own lives. I really enjoyed this part of the discussion because it was really more like the professors were talking to one another, rather than just answering the questions.

“As people, people react to their emotions. She’s not living up to the norm of a 35 year old. She gains everything and loses everything.” Professor on right. “Ester is more interested in telling this man about her history. George is more about the sexual drive (?)” Professor on left. “Your father is your paradigm about what a man is, she doesn’t want to be intimate, she wants to be emotionally intimate.” Professor on right.

Now for sure sure, I managed to hear the last two questions that were asked. “What would you say about Caribbean identity?” “She sympathizes with George. He came from working parents who have nothing. When he comes to NY, he wants to be a part of the American dream. he wants to use Ester as to be a part of this American dream. I think of him as a complex character. George wants to recreate his identity in America.” Professor on left. “Ester can sow and she has this certain independence. She has this house…which again is independence. These black women somehow found an independent life…” Professor on right. They spoke about Ester’s and George’s relationship and ideals/beliefs. I found their thought process quite intriguing because I feel as though once I pick up the book, I’ll be looking out for these two characters and will be taking note on their identities. I want to determine whether their Caribbean identities really play a big role in this story for myself.

The final question I heard was, “Last question: what are some possible themes your students can research?” Now throughout the response to this question, they spoke about how there are places here in NYC that can actually help a student retrace Ester’s steps and paths she took. Like for example the tenement museum and Hester St in the lower east side of Manhattan. They passed around photos taken back in the day of how Hester St looked and of photos of the insides of a shop to portray the limited space people had back then. “Students can retrace Ester’s steps. Ester goes to the lower east side. I encourage students to take a visit to the tenement museum…he lives where he works. That what I would like students to do in a research project. Go out and explore and put yourself in Ester’s shoes.” Professor on left. “The clothing, how do they dress? What kind of clothes does Ester wear? …she talks about sowing a button… Their apparel speaks about their class. That’s what my students are looking at, looking at their apparel and who wears what.” Professor on right. “Ester means hidden.” Professor on right.