In science fiction class on Thursday October 4th, 2018, instead of holding class in our usual room, we went to visit The City Tech Science Fiction Collection which was held on the second floor of the City Tech library.  The entire collection is courtesy of an anonymous donor.

When I first heard about the anonymous donation of books delivered to the library, I actually thought they would have to open up a new section in the main part of the library.  It would allow people to just freely browse through the items whenever they wanted. I didn’t actually realize the books would be in its own separate room completely apart from everything else. “The City Tech Science Fiction Collection” video made it appear somewhat identical to the main library aisles. I never actually went to the library to look for books before so I wasn’t really familiar with how things work around there but the City Tech Science Fiction Collection were part of The Archives which are usually created to store and preserve certain items.  It made sense for them to want to keep it away from the rest of the library because allowing random people to have access to them would risk ruining the books. If the books were damaged in any possible way, it would waste the anonymous donor’s hard work of collecting everything. 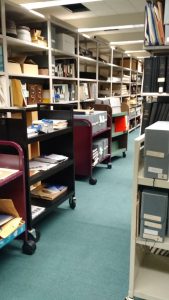 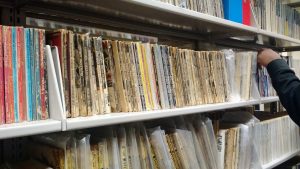 Row of Books with Varying Levels of Quality

Once the door to the archives was opened, we spent most of our time checking out the deepest aisle of the room because Professor Belli told us to look for science fiction magazines to research on.  The room was kind of ordinary, the size of a classroom, yet it was mainly filled with a bunch of shelves dedicated to holding the science fiction collection. It was kept well conditioned as a way of ensuring the books weren’t negatively affected by any extreme temperatures.  Along the side of the wall were shelves holding some binders, folders, boxes, and trophies which made the aisles hard to walk through but Professor Belli told us that some of that stuff weren’t part of the anonymous donation so it seemed City Tech was using it as a storage room for their own things as well.  On the main shelves, almost all the books were squished together like they were trying to conserve as much space as possible. Some of the books were contained in plastic and others looked like their spines were in such bad condition, they would fall apart upon touching them. There were so many issues, it made me wonder how long this anonymous person has been building up this collection for and why he would suddenly give all of it away. 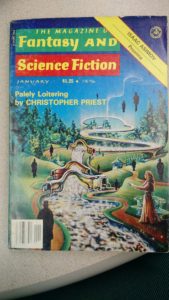 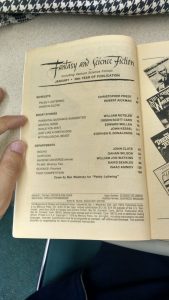 Among the major magazines were “Amazing Stories”, “Analog”, and “IF” but the one my partner and I picked out were from “The Magazine of Fantasy and Science Fiction”, a magazine that seemed to have a running time so long it filled up about four rows of bookends on a single shelf.  I chose an issue from January 1979 Volume 56 No. 332 because the cover art was unlike the others. A few of their issues had dark outer space like covers but this one seemed to lean more on the fantasy side by using brighter colors and depicting a forest like setting with a river that flowed downwards from the sky.  While examining the contents, one thing I noticed about this magazine was that it wasn’t like the magazines that are popular today. The science fiction magazine only cost a $1.25 and seemed to have pages that lacked smoothness, color, and artwork. The most detailed artwork was on the cover but afterwards, it became somewhat more basic.  For example, one of the drawings was of a small astronaut walking. Most of the color was also dedicated to the cover and a single advertisement for cigarettes but the other advertisements in the book were more black and white for some reason. 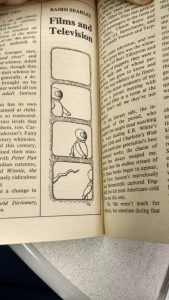 Magazine doesn’t put too much focus onto artwork. Only for the cover and small comics. 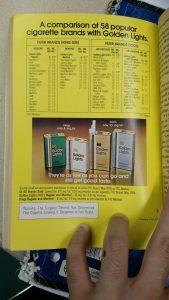 Taking this experience into account, I thought seeing the science fiction collection through my own eyes gave me a better impression of it than watching it through the video.  I could see the books more clearly and compare it to the ones that are typically used today. As we know, science fiction is a genre designated for speculating and envisioning the future. The magazines are a really good way of seeing how people previously depicted outer space, aliens, and technology but our views develop as we venture further towards the future.   Reading about how far the past’s imagination extends sounds pretty intriguing to me so I look forward to seeing what other ideas they came up with back then.