Phoenixx’s Presentation: Into The Mind of Science Fiction Writers: How Sci-Fi Authors Use Architecture to Visualize Their World

Sajida’s Presentation: Artifical Intelligence Use in the Army

Today was the first day of the final presentations. Chris, Tyler, Vishal, Sheng, and Pedro went today. On Thursday its:

We might discuss West World on Thursday if we have time so make sure to bring your notes. Also don’t forget the final course reflection is due on Thursday.

If you want to check their presentations out you can click on the titles and it will bring you to a pdf version of the presentation.

Points to remember while doing research:

Questions you should think about before the presentation

things to keep in mind before and during the presentation:

Be prepared to ask questions

You should know your topic

Connect the dots for the reader

Print your slides and notes out

About the Lightning Presentations

Suggestions for the Lightning and Final Presentations

About the Cover Letter and Abstract

During class, we discussed the guest editorial and gave our own point of views on it.

3 Things To Ask Yourself When Drafting Proposal:

Today in class, we attended The Third Annual City Tech Symposium on Science Fiction. We were presented with a panel from students that read the book named ” Shaping the Future: A Student Roundtable on Octavia Butler’s Parable of the Sower”. Below is the notes that was taken about the book during the panel discussion.

Main character name was Keith that lived  behind a gated community. Lived in an dystopia where people attacking each other was normal.The setting of the community has not rain in years and the crime is at its highest. They call that area the  survival of the fittest. Throughout the book before he went into the world of reality, everything was spoon fed to him. The sister in the family named Lauren has a lot more say in the family than Keith. Keith went through a situation where he stepped outside the community and took the important keys that opened the gate to the community. These keys he took was so crucial and essential to the story, he went outside and put the lives of the people in the community at stake. He wants to be the man of the house but he has not faced reality yet, he went outside and was badly injured. He was taken for all his clothes and other valuables, and Keith is shown selfish. He went back out again and brought his father’s gun, he goes back out and joined a gang and paid his price for his consequences

People relied on God for everything

Lauren was aware of how messed up the world was

She prepared for it

Took manners into her own hands

Started to question if God is real

She wrote down journals

Went up north to look for freedom

She did not believe in the religion everyone else believed in

She went places to find a job , and nobody would give her a job

Her friends and family is gone, so she followed God guidance’s through all her situations

Everything you touch changes

What would you do when the world is pratically over ?

Today in class we began our discussion on the Show adaptation of The Handmaids Tale. These are the notes from today and the questions/topics/quotes we interpreted and analyzed as a class.

Free Writing Prompt #1: What does it mean to be Human?

Free will is stripped away from all people living in The Republic of Gilead. Thus giving people especially handmaids structurally made choices. Like the decision to be a Handmaid or become unwomen and live in colonies filled with toxic waste tasked to clean it all till death. An obvious choice from a survival standpoint. Which leads to the Anatomy of a woman the handmaids being used for a “higher purpose”. An empty vessel of sorts used to carry Gilead’s purpose. Survival and the social classes set by Gilead creates an immense division between the women in Gilead. These social classes blind them from the actual problem laying in front of them (Social Division – /Stronger Together +).

”There is more than one kind of freedom, said Aunt Lydia freedom to and freedom from. In the days of anarchy, it was freedom to now you are being given freedom from don’t underrate it” (24)

These quotes speak on the world before and after Gilead. In the first quote, Aunt Lydia refers to two freedoms. Freedom to, Freedom from. Freedom to refers to society before Gilead where there was freedom to do whatever one pleased (disregarding consequences). One could kill, steal, cheat, have a different sexual orientation/preferences, etc. Which meant everyone was exposed to the fact of being killed, stolen from, cheated on, and have had a different sexual orientation and or preference. The anarchy that leads to low infertility rates and high toxic levels. Freedom from is referring to life within the Gilead republic where all of these “Freedoms” are crimes punishable by death. Freedom from being killed, cheated on, stolen from, with no freedom of will to decide or even have a sexual orientation or preference. Thus Aunt Lydia saying not to underate being saved from these actions by the Republic of Gilead.

The Second quote tackles the “Freedoms” within the Republic of Gilead through Offred’s lenses. “Freedom like everything else is relative”. The freedom she speaks of are the ones handmaids hold. Although they may not seem as “freedoms” but overall necessities to live a functional life, in the Republic of Gilead they are somewhat freedoms. And what makes them relative is that their actions within Gilead determine their fate. Good behavior is awarded in a sense with being able to survive another day whilst bad behavior or unethical behavior under Gilead republic will have fatal repercussions.

For Our Westworld discussion have this question in mind. How is Humanity redefined in Westworld?

Freewrite about this question/ take notes from the episode that answer this question and bring in those scenes as well. This will help in preparation for our upcoming discussion.

Next Class, we will also have a  discussion about our final project. Be sure to attend this Tuesday class before break.

Homework for Next Class

Three different extra credit opportunities will be coming in the near future, including events about:

To receive extra credit, you must attend an event and post a blog about it. The blog could be about what you learned and what you thought were the most important takeaways. Remember, these are 3 different extra credit events. More information will be available soon.

Level 2000 and 3000 literature courses will be available in the Spring of 2019. The Professor specifically mentioned the Major Topics in Writing and One Major Writer courses. For more information on literature courses, visit the Openlab site or check the photos below. 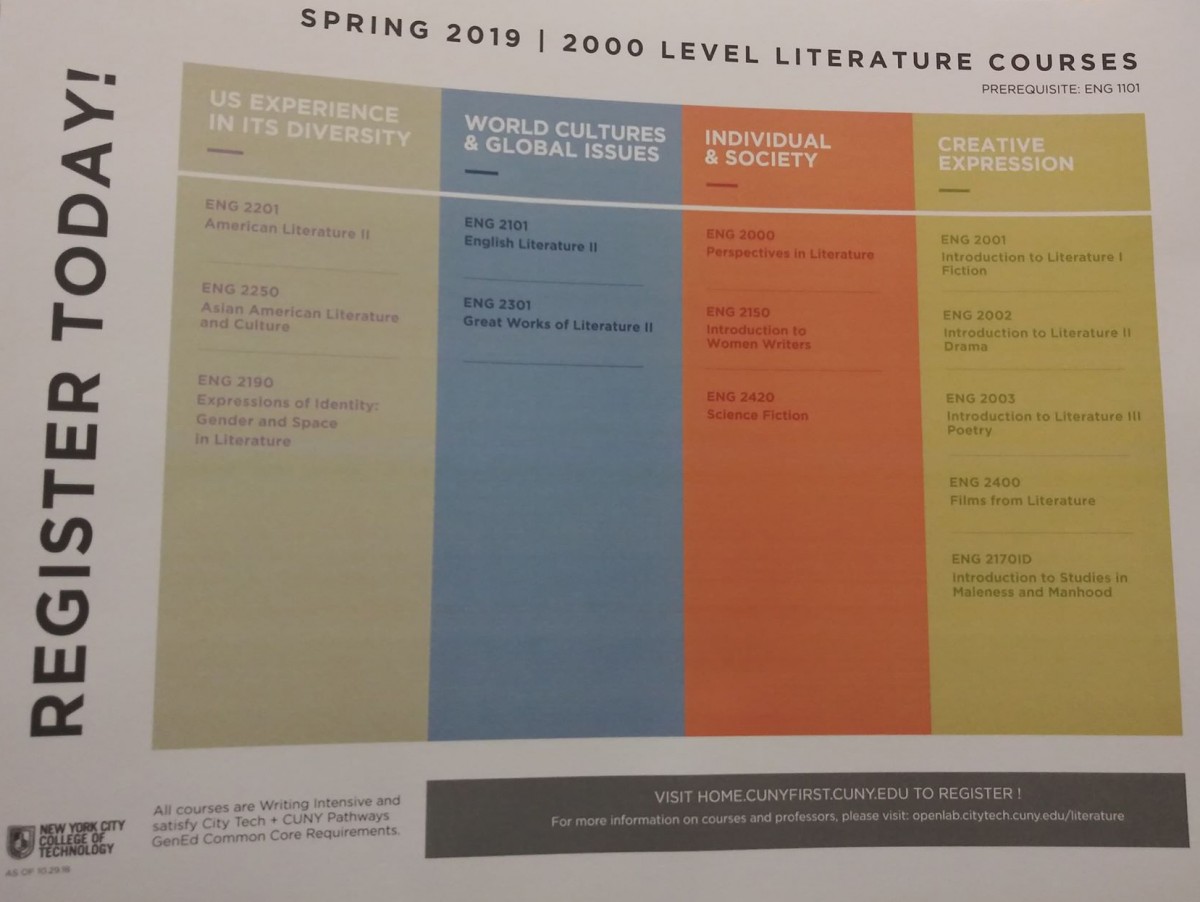 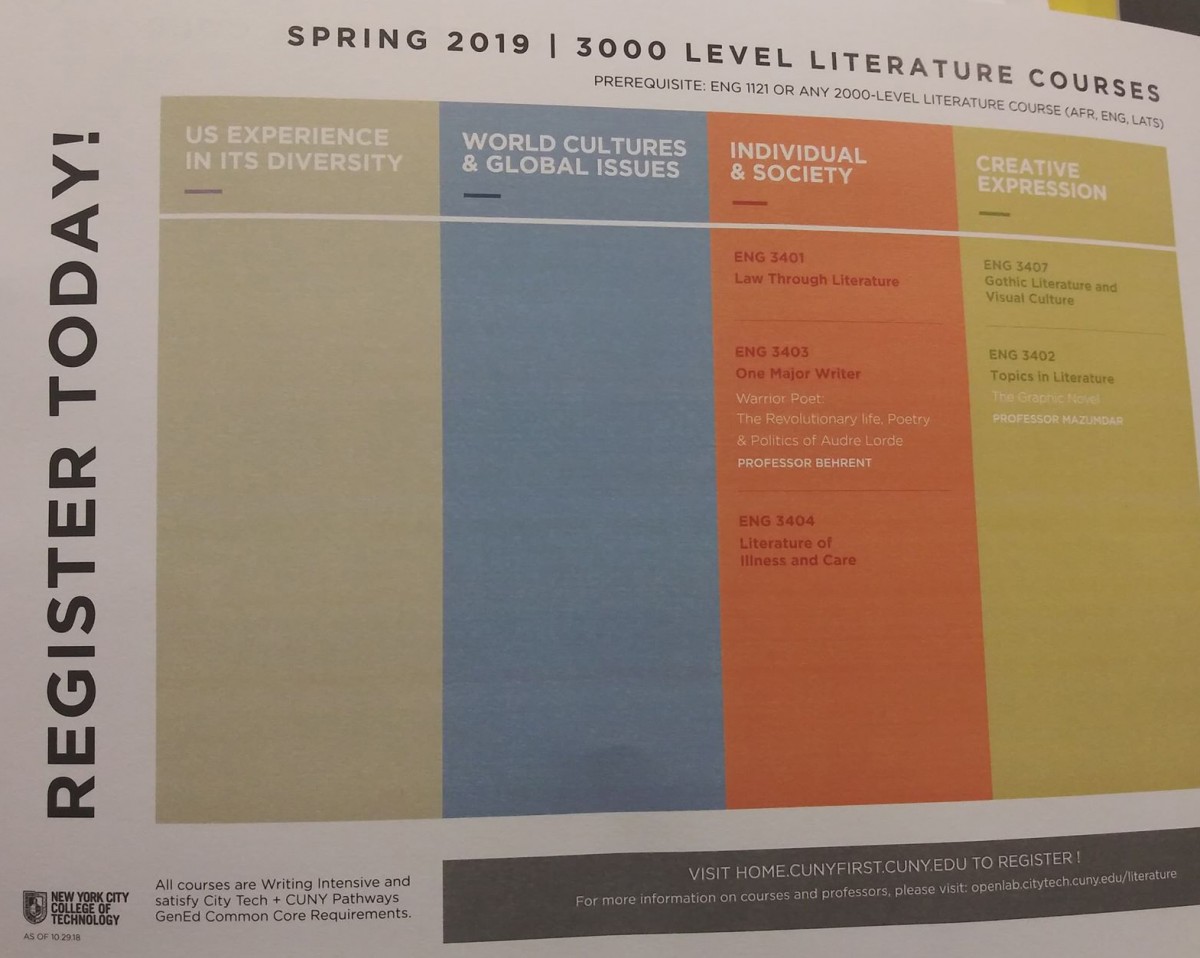 We briefly mentioned Andrew Marvell’s poem “to his coy mistress.”

The Image of Women in Science Fiction Article

This is an article that discusses how women have been stereotyped in science fiction. The main points the author makes include:

This is a controversial article that discusses women in science fiction. We touched on several points about the article:

The author’s main points include:

How did this world came to be?

Fun fact: The author of the book, Margaret Atwood, makes a short appearance when she slaps the main character.

Next week we’ll have two reading response blogs due. Check the schedule to see the assignments.

“Utopia as Method: The Imaginary Reconstitution of Society”

Quote we analyzed last Tuesday, November 6 was from “Utopia as Method: The Imaginary Reconstitution of Society” by Ruth Levitas,

Gender and “The Image of Women in Science Fiction”

If you see any mistakes or missing information feel free to call me out on it in the comments.