Here we are! Parts 4-6 of this page turning, pulse accelerating, puzzle of a novel, Station Eleven. These 3 parts have been very thought-provoking and informative with regards to Arthur Leander’s life post the pandemic and the many paths that end or cross each other as the Georgia Flu swallows mankind whole. 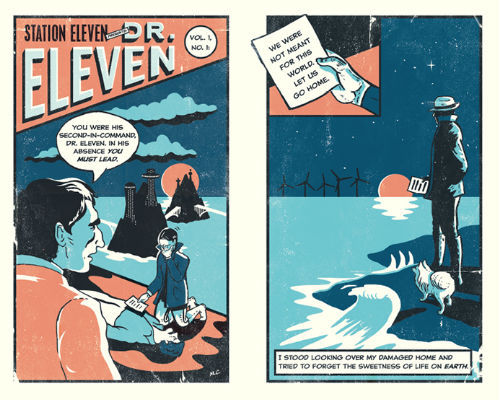 The persisting themes we can sense as we read are definitely still survivalism, but also a sense of the significance of surviving. As Kirsten asks herself existential questions such as, “What did it mean to be yourself, in the course of such unspeakable days? How was anyone supposed to seem?”, (Mandel 140), I also as a reader found myself at a loss when imagining any sanity in the aftermath of the absolute end of civilization. As the Symphony begins to experience the perpetual disappearance of its members, the plot’s mood darkens and takes a twisted turn with Kirsten herself and her closest friend August losing contact with the group entirely. “Hell is the absence of the people you long for”, Mandel admits on 144, but then follows this statement with a seemingly contradictory question on 148 when Kirsten thinks, “If hell was other people, what is a world with almost no people in it?”. The world post the Georgia Flu is almost seen as an empty Heaven; almost entirely absent of humans and the machines all manmade that once were given life by man were now resting unmanned. This peaceful image of the post apocolyptic world reminded me of Kina’s unfavored point in class that life post the Georgia Flu was valued more.

Kirsten has conflicting and dissipating memories of her life prior to the end, giving her the realization that the younger you were during the pandemic’s origin, the less affected you are by the world that existed now. It is almost as though you are given a clean slate of a mind, barely remembering the luxury of cold air seeping through vents, (an air conditioner), or act of flipping a switch “and the room floods with light”, (Mandel 150). Kirsten’s difficulty in remembering if refrigerators had light inside brought back a flash of the first scene readers are given when Kirsten is a traumatized child watching death unfold before her, which is also the last day of the normal flow of life. Kirsten’s distant memory of her previous life allows her to mentally and physically adjust more efficiently to the only way of life there was now; survival and preserving what was left. We also see this in Alexandra; a very young Symphony member who relies utterly on the memories of the older members for merely an understanding of the kind of world that existed before her. There is nothing to reminisce if you never got to experience or live through it.

Mandel also brings us back to Jeevan and his way of coping with the fatal pandemic storm that was overhead, as his attempt of “waiting out” the flu was cut short along with the end of his food and water supply. It seems as though many people’s first instinct is to wait it out, as it was also Kirsten’s first action when she admits post pandemic in part of her interview with Francois Diallo that for the first time, “waiting seemed to make sense”, (Mandel 185). Waiting slowly but surely turns into survival as questioning what there was to wait for came into place. The air is thick with desperation and hope that the ending itself would end as Jeevan outlives the internet, the newscasters on television, and eventually his hope of survival in this vacated tower that reeked of death. Jeevan’s thoughts on Mandel 178 really had an affect on me as he realizes how much human presence mattered to all that occurred in the previous everyday world. “There had always been a delicate infrastructure of people, all of them working unnoticed around us, and when people stop going to work, the entire operation grinds to a halt”. Humans catalyzed the start of everything; planes, cars, buildings, stores, electricity… The absence of humans was the end of this continuous routine flow, which reminded me of our previous Ray Bradbury piece, “August 2025: There Will Come Soft Rains”. The gods were gone, and everything was frozen below Jeevan as the snow continued falling.

We jump to and fro from the vision of “iPhone zombies” and sleepwalkers to desolate lands and the fear of encountering other people. The coming across of corpses and skeletons in cars and in beds is the haunting reminder of the grand loss humanity has endured, and life on Earth barely succeeding with such a slow, faint pulse. The destination of Severn City seems to be a main point that will connect many and answer some of our bursting questions as we find out that Elizabeth and Clark were on the “twenty-seventh-to-last” flight to ever take off, (Mandel 224), headed to Arthur’s funeral in Toronto in the first hours of the pandemic but diverted to Severn City airport. Severn City is the destination of the Symphony as well, as they seek a larger population of surviving souls said to be sheltered in this very airport. The ending of part 6 reveals Miranda’s fate as she is engulfed in the news of Arthur’s death and aware the deadly virus that was now in her system. We are aware of how widespread this pandemic really was, as it originated in Moscow and was now apparently in Malaysia where Miranda was. These last moments of life for Miranda are full of light as people begin to disappear from around her, and as the world of Station Eleven flickered in her eyes just before her last sunrise.

One thought on “Never Rains, But It Pours”