The final chapters of Station Eleven finally disclose the past of the prophet.  The prophet ends up being Tyler, Arthur Leander’s son, who started showing warning signs on page 260 where he is “reading aloud to the dead from the book of Revelation.”  This is ironic for two reasons, the first being the original name of that book of the Bible, while the other is the fact that the prophet is very likely an allusion to the second beast of the book of revelation who is sometimes referred to as the false prophet.  The first time we might be able to see the connection is when, on page 53 of Station Eleven, they find a grave yard with grave markers without disturbed soil.  While they were not exactly killed it echos the book of revelation which says that the second beast breathed life into an image “so that the image could talk and put to death all those who would not worship it.”(Revelation 13:15)  While this could be that the prophet could just represent the second beast, there is also a chance that the prophet could also be representative of the first beast.  There might be those that claim that it can not be as the sign on page 260 talks about the destruction of Babylon something that was divine judgement.  To that I point out Revelation 17:16 as well as Revelation 18:4  these passages show that while God approves it is the Beast with it’s 10 horns that destroys Babylon along with the fact that God tells his people to get out of the city as to not get cought in the punishment of the city.  As this is incredibly depressing I thought I would leave on a more comedic line.  The picture below looks like nature is speaking to you; until you realize that you have to constantly walk up stairs to get home 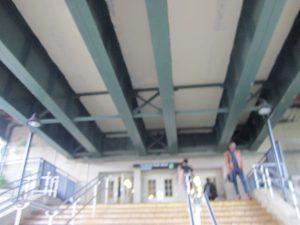 The time jumps started in the second and third parts of Station Eleven  by Emily Mandel  is an effort to compare the past and future of the story.  Now this seams a bit strange to say automatically as there are other reasons for time jumps in texts, some general and others a lot more genera specific.  The reason that I believe that the jumps are to compare the past and the future in the story is because there is the comic that first shows up on page 42 and is repeatedly mentioned and created in part 3, the Dr. Eleven comics.  On the previously mentioned page it refers to a dog in the comic that Kirsten, the character that owns the comics, does not recognize as a dog.  Later when the creation of the comic is shown it is revealed that the dog in the comic is a near replica for the creators dog(100).  While this is easily explained by the twenty years passing after the flu outbreak and toy dog breads dying out, it shows an piece of life that is taken for granted so much in one time it’s added without a thought while in a later time it is seen as strange and supernatural.

Another interesting thing about the time jumping in the third part is that it develops the plot device of the comics beyond the mere macguffin that it was in the second part.  If someone asked me what the point of the comic was had I not read the third chapter I would have said it was just a macguffin to explain Kirsten’s research into Arthur Leander.  The important thing about this conclusion is that in the second part the comics could have been anything; with the explanation of the creation of the comics we can start to think about the difference  between the creator of the comic and the reader of the comic, and how this comparison shows how life after an apocalypse is without having to describe it to the smallest detail.

In the first paragraph of Station Eleven two stories are referenced, King Lear  and the Greek story of Leander,  while seemingly unimportant especially as Leander is just a dead guys last name in the story it foreshadows the end of civilization in the sixth chapter.  King Lear is an obvious foreshadowing due to the fact that most of the characters die in the ending and after the major actors talk about what to do about Arthur Leander’s death it states that everyone in the bar that they were drinking at died in the three weeks fallowing the chapters end(Mandel 15).  To make a metaphor the entire sixth chapter was pretty much hauling the wagon of dead corpses that used to be society into the open air, exactly like the ending of King Lear.  The Leander connection is drawn incredibly well in the third chapter where Jevan’s medical friend Hua tells Jevan about the Georgia Flu.  When the flu is discussed in the chapter it feels like a flood where in the beginning it’s just a girl, and then it’s 13 infected, and then there’s over two hundred and it was spreading.  Just before Hua hung up he coughed signaling he might also be infected.  By the time the sixth chapter rolled around it seemed as if society had drowned in the flood like how Leander died in Greek myth.  While I will admit that I did not see the end of civilization by deadly virus in the first paragraph, my first thoughts while reading the text did go along the lines of guy who is named after a Greek character that drowned is acting in a play that ends in most of the characters dying.

Terms used to describe the child in the basement:

The terms show that the child was stunted physically, mentally,  and emotionally

after seeing the child the people of omelas feel disgusted, feel contempt, feel that they can not do anything , for the younger citizens they may feel that the child could be them, all ending with the majority of them becoming complicit after mulling over the problem.

where do those that walk away walk to?

-intentionally into  the unknown to get away from the great injustice

extrapolation- what if?/ taking something to it’s logical conclusion

I’m Patrick Casalaspro from Elmhurst, Queens, currently beginning my second year here at  city tech.  My major is mechanical engineering technology, and I am writing this while drinking a yellow drink out of a green bottle.  My interests are trains(mainly British Steam engines, early British diesel engines, end of steam era american steam locomotives, MNR/LIRR rolling stock, and subway rolling stock), the world wars, and video games.  I read a lot of fan-fiction along with watching videos on YouTube. 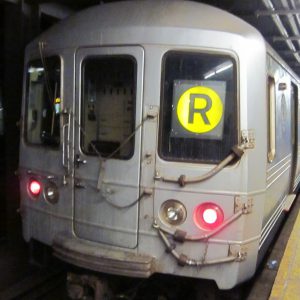 The promised R46 is leaving the station

I took this picture at the end of 8 grade, the train is leaving the Grand ave Newtown stop on the Queens bulivard line.