Charlotte Perkins Gilman writes a story about a woman’s slow descent into insanity as a result of prolonged isolation by her misguided husband.

The Yellow Wallpaper is a short story about a woman’s confinement in a large mansion, written in first-person journal style. The woman is revealed to have a “nervous depression” (Page 1, Paragraph 8) and her husband who is a physician (Page 1, Paragraph 7) tries to cure her condition through rest. The woman does not agree with the treatment (Page 1, Paragraph 10) but undergoes the treatment anyway because she wants to be cured.  She is sent to a mansion’s nursery at the top of the house (Page 2, Paragraph 3) and she notices the yellow wallpaper, which she has tremendous disdain for. The woman describes the wallpaper as “dull enough to confuse the eye in following, pronounced enough to constantly irritate and provoke study, and when you follow the lame uncertain curves for a little distance they suddenly commit suicide — plunge off at outrageous angles, destroy themselves in unheard of contradictions. The color is repellent, almost revolting; a smouldering unclean yellow, strangely faded by the  slow-turning sunlight” (Page 2, Paragraph 7-8).

Over time, the woman becomes more and more obsessed with the yellow wallpaper in her room, and eventually believes that there is a woman hiding behind the wallpaper, as she writes “Behind that outside pattern the dim shapes get clearer every day. It is always the same shape, only very numerous. And it is like a woman stooping down and creeping about behind that pattern” (Page 5, Paragraph 11-12). Although John, the woman’s husband, is genuinely loving and caring, he does not listen to her complaints about her confinement, as he believes this treatment will make her better. In her later journal entries, the woman becomes more and more obsessed with the wallpaper and the imaginary woman, and her writing style becomes more frantic and disjointed, signifying her descent into madness. The woman tears away at the wallpaper, wanting to free the imaginary woman behind the wallpaper, and by the end of the short story, the woman believes she is the same imaginary woman from the wallpaper, saying that she “got out at last…in spite of you and Kane. And I’ve pulled off most of the paper, so you can’t put me back” (Page 9, Final Paragraph).

I personally enjoyed this short story, as I felt the story is somewhat similar to Stanley Kubrick’s The Shining (1980), which is one of the most iconic horror films of all time. The Shining also features a character’s slow descent into madness as a result of prolonged isolation. Both main characters in The Shining and The Yellow Wallpaper lose their sense of self and become deranged and psychotic.

The author, Aurora Levins Morales, writes about a woman who accepts her cultural heritage after suppressing it for a long time.

The protagonist of the short story is a woman who is an immigrant from Puerto Rico. I believe the woman lives in Oakland, CA, as she makes several references to Oakland throughout the story, for example “…harsh voice carving out the Oakland Sky…” (Paragraph 1) and “…daily routine of a Northern California writer…” (Paragraph 8). The “Puerto Rico waking up inside her” (Paragraph 1) refers to her accepting her Puerto Rican heritage. The woman in the story makes several nostalgic references to certain things from her home country, such as the “wild careening hysterical roosters…screaming at the night and again at the day” (Paragraph 2).

The woman in the story used to suppress her cultural heritage for a long time, as evident in Paragraph 3 as she states that she refused to speak Spanish in nursery school, and in Paragraph 4 where she states that she does not try to hide her accent anymore. Another important change in her acceptance is living in what she calls a “clockless” life, in which she doesn’t let the time of day dictate how she should act. She states this at the end of Paragraph 5, in which  she would much prefer to live in “a world of morning and afternoon and night, instead of ‘five-forty-one-and-twenty-seconds’…“. This is further reinforced in the next paragraph where she describes that she would rather eat whenever she is hungry instead of having fixed mealtimes throughout the day.

Hello all, my name is Calvin Ly, and my major is Computer Systems focusing primarily on databases. This is my last semester before graduating from City Tech, and I am currently finishing the last of my required courses. I am currently looking for a job/internship, hoping to be employed once I’m out of school. Over the summer, I spent time learning new programming languages, namely C# and Scala, as well as making a simple contact manager app using a new application framework called “INFOR Mongoose”. Outside of working with computers, I have a wide variety of interests. I really enjoy watching movies and television series, and I’m always looking for something new (or old!) to watch. I’ve binge-watched all three seasons of Fargo, and am currently enjoying the critically-acclaimed Twin Peaks TV serial, which recently returned in 2017 after a 25(!) year hiatus. Some of my all-time favorite movies are Alfred Hitchcock’s Vertigo (1958), John Carpenter’s The Thing (1982) and Francis Ford Copolla’s Apocalypse Now (1979). My favorite horror movies are The Evil Dead (1981), Alien (1979), and Exorcist III (1990). I also enjoy watching professional basketball and browsing the Internet.

I’ve used OpenLab before in a previous class, in which I was required to read class material as well as post homework assignments. My weakness as a reader is I tend to be lazy in looking up definitions to unfamiliar words. My weakness as a writer is I find it a little difficult to begin a paper, and I spend a lot of time thinking about how I should start. My favorite genre is Science Fiction. My favorite books are Andromeda Strain by Michael Crichton, Brave New World by Aldous Huxley, and Catch-22 by Joseph Heller. Though I personally don’t read as much as I should, my view of literature is essentially the same as my views on film. I believe that literature (and film) is extremely important in exposing people to different viewpoints and philosophies. There are critics of fiction out there who say “its just a story, its not real”, but I believe that people can learn a lot from reading (or watching in film) about how characters deal with hardship and tragedy. 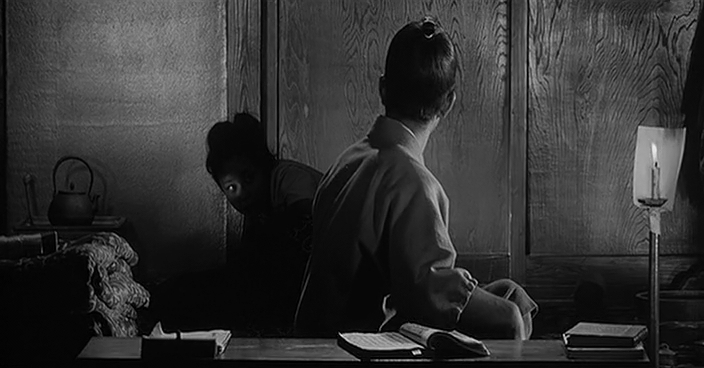 A still from Red Beard (1965) directed by Akira Kurosawa