The One Where I Realize Everything Really Late

Let’s just get this out of the way right off the bat.

Ok, now that that’s out of the way lets get into this thing.

Blade Runner is an adaptation of Do Androids Dream of Electric Sheep? that is lacking. Probably because it’s an adaptation, these things usually don’t go that well. Now Professor I know you didn’t want us to explore the differences between the book and the movie but this is a glaring difference that is begging to be brought to light by moi, and it would be a disservice to America to not address this: What the hell happened to to the andys in this movie?

Not literally. They died. Again Pris’ death is a nightmare. Arguably the greatest thing about the book is the fact that it takes no particular stance on who’s greater human or andy. Countless points in the text show that andys are perfectly capable of acting like a human and humans are perfectly capable of acting like andys. Blade Runner completely throws that out the window except for a subtle nod at the beginning. At the end of the opening crawl(the text, not the whole first act), you see block that says:

“This was not called execution. It was called retirement.”

This is of course in reference to the act of killing an andy. But the text makes sure to remind you that these aren’t humans otherwise it would be an execution. Instead to justify a barbaric thing(read:murder), the humans turn the act of killing into a service and thus a Blade Runner is born. This was a perfect nod at the fact that their classifications in the book meant nothing & that they were frequently in reversed roles, a concept the movie ditched in favor of layering on just how evil replicants can be. I just wish it hadn’t been a nod and been an actual idea explored in the film. In Ridley Scott’s defense, I appreciate the fact that it is their selfishness and their desire to live longer that motivates them to act how they do. I just wish he had made them capable of being more humane, a characteristic that the worst andy in the book, Rachael, shows tremendously in Blade Runner.

It’s a weird film. It includes animals, many in reference to plot points in the book but doesn’t even broach the topic of Mercerism. There’s no real classifications outside of human and andy, which robs the film of some of the texts greater exploration of the ever shifting dynamic of their hierarchy. THERE’S NO DAMN BUSTER FRIENDLY, which ruins the twist in the book that levels the playing field. Oh wait, I have another point.

Blade Runner plays out like a noir film. One of the core ideas of a noir film is usually the moral implications of the protagonists actions and how they weigh on them. This does not exist in Blade Runner.  Deckard is a fairly bland character with very little dialogue, weak motivations, and virtually no conscience. He’s also a good shot but awful in close quarters. Everywhere he goes, replicants die. But this never really does much to him. Outside of being rattled by two particular encounters, he’s the same character whereas Deckard in the book undergoes a dramatic change. The further and further he gets into the hunt, the  more physically, mentally and emotionally drained he becomes. He seemingly falls out of love with his wife, falls in love with an andy, questions his own authenticity and questions whether what he’s doing is really morally sound. 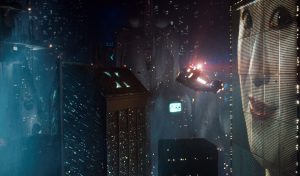 Regardless of how I feel, this is a dope shot.