The Ins & Outs of Instagram-Prezi

I have used Prezi for a presentation several years ago. After a 4 year gap I did have to spend some time relearning how to maneuver the site. I actually prefer Prezi to Powerpoint because it allows more creativity in how the presentation flows. I love the zoom feature and the surprises that can be added to a presentation with the amount of space that is available in one path. The most confusing part of the experience was customizing paths and trying to rework and delete content.

“According to Lee Rainie and Berry Wellman, communities online are a new social operating system that gives rise to ‘networked individualism’ because, when you are in a community online, it is personal and individual and for multiple simultaneous users multitasking in the environment” (Cohen & Kenny 10). Diving a little deeper into the idea of “networked individualism”, I found that what it actually means is the transformation from group-based networks to individualized networks.

I have to disagree with the notion that being a part of an online community is personal; in fact, I think its welcoming to outsiders or those who share similar interests because essentially, users of the digital realm are producing content onto the World Wide Web for anyone and everyone to see. For instance, Republican staffer Elizabeth Lauten took to Facebook to criticize President Obama’s daughters. Take a look at the photo provided below. 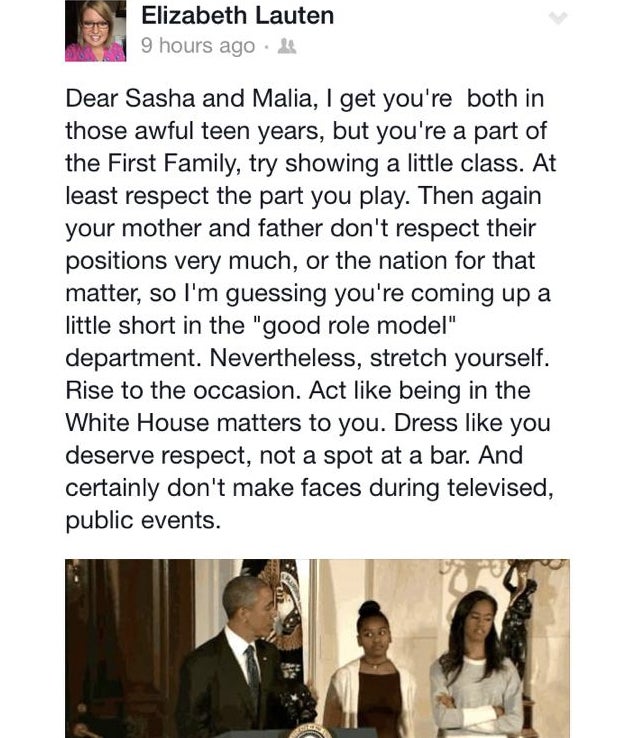 After reading her comment, what is your prospective on what she said?

Her comments created a media uproar of social media backlash with people taking it as far as saying she deliberately cyber bullied Sasha and Malia Obama; causing her to delete the post, set her social media account to private, issuing an apology online and finally, resigning. Cohen and Kenny make it a point to explain that “the content or material discussed through text, displayed through visuals, or heard through sound captures the imagination of the web user” in that case, giving digital users the freedom to express themselves freely without sugar coating over anything (10). Elizabeth Lauten did not sugar coat how she felt, as millions of others do everyday without thinking but writing in a digital space where she felt comfortable enough to speak openly to a community online. Unfortunately, what she had to say, not many people took a liking to it.

Technology is rapidly changing the way business is being handled and social media has become the dominate form of communication. Countless numbers of businesses use social media such as Facebook,  Twitter, and Google+. Social media can act as a customer service tool allowing consumers to interact with product from a specific company. At the same time, these companies must be mindful of balancing an employee’s privacy against the employer’s security. “In social media employees, should be transparent about what they are doing and why” because anything can happen, ideas or opinions can be misconstrued, taken out of context, and it effects negatively not only on the employee but the organization as well (Carroll 250). Recognizing that nothing on the web is truly private should have digital users stopping and asking themselves what is worth putting online for everyone to see.