There is more that what meets the eye with Shia Labeouf’s “Just Do It” viral video. The video has transformed the Nike logo. In this video we are able to see the true effects of circulation of a medium. The video is to say the least subtle and gives a hard push to anyone who has been lazy in following dreams. Mr. LaBeouf, Luke Turner and Nastja Säde Rönkkö created the video with the intention of it being used for transformation. Since then the initial video has been remixed and transformed into various medias ranging from still images to song parodies. These have in turn have lead to more participation and involvement. This only leads to question what mediums have been created in such a way that not only provokes creation but also allows it as a part of its own creation.

For the success of any media whether digital or not there needs to be an adequate amount of circulation in order to actively categorize the media as successful. Upon creation of the media the author understand that there must be an attention generating or grabbing component. This component is what increased the chances for circulation. Take for example, the Pepe The Frog Meme, it was created and within a matter of days had spread as far as being adapted into various other scenarios than the first intentional creation. Which also leads me to the point which stipulated that circulation promotes multimodality.

Multimodality is not only the composition of different forms of media, but as I see it  the expansion and recreation of a media into various forms (also can be interpreted as remixes). Both, circulation and multimodality promote and invite an audience in both a social and economic aspect. You have to think of it this way, a print billboard in a dark alley with little to no foot traffic with gain no attention and will not circulate the advertisement however, at the same a billboard in a bright and rather well lit area with enough foot traffic could also face the same problem if the intended media does not generation attention and invites participation also known as the circulation of said media. As mentioned in, Laurie E. Greis’s, Iconographic Tracking: A Digital Research Method for Visual Rhetoric and Circulation Studies, states that, “Studying an image’s eventfulness is also necessary for addressing the complexities of visual production, distribution, and circulation brought on by a viral economy.” (pg 335) In other words, the media itself allows entails the strategies for both commercial use and social experimentation.

In both, Hanfer and Jones, and Cohen and Kenny it became apparent to me that the way by which we sell our creations online is by corresponding to the demands and the usage of our intended online users– marketing and advertising 101, but what is not so obvious is in as mentioned  in Hanfer and Jones the concept of, “Interaction and Involvement” (pg 61). With Web 2.0 came the revolution of users interaction and involvement in online subject matter, “The producer of an image can draw on a range of techniques in order to engage and involve their audience, express power relations, and express modality (how truthful something is…” (pg 61). Here we see how there is a manipulation of sorts in order to promote and circulate a media. As producers of media we play on peoples emotions, strengths, weaknesses, fears, and joys in order to promote and circulate our work. All in the same,  Cohen and Kenny’s chapter, which also is systemic in the sense that it allows their audience to carefully understand the do’s and don’ts of producing a successful meme exemplifies the idea that as creators we must be able to chose wisely how we promote our work in such a way that it circulates and generates noise– in a good way.

We as producers, authors, and writers must understand that the way by which we share our work and enter it into an online society subjects it to the  scrutiny of fame or failure. The success of a media in my interpretation is analyzes and addresses the needs and wants of an audience but does so in a way that it generates equal social  and economic circulation which eventually allows the creation of new and extensions of that said media. Circulation is a vital part to any media as it is to our body. As it is in our body the exchange allows to grow and reap benefits and so too does this component online.

When we think about how we communicate on a screen several things come to mind, text messages, emails, Facebook messages or maybe twitter. What we don’t think about is how these modes of communication change how we send each other information. As it says on page 90 of Chapter Four (Cohen and Kenny) “one of the biggest downsides of digital culture is transmission loss of meaning and depth in text in short messages”. This along with the combination of emoji’s and short speak make us pre programmed to keep it short and get to the point. It also opens the door to miscommunication because how I type something may not be the way its read by someone else, which can either be a funny misunderstanding or something more serious like offending someone.

This idea relates to page 338 of the Gries article where she talks about the consequences of an image as it circulates. When we post something to our social media accounts they’re  no longer ours, they can be reposted and reworked thousands of times and the message we set out to send has now been revised half a dozen times. Think about the most popular memes out there right now and how many captions they can host or how many variations of that same meme you’ve come across in your scrolling. For example this picture has been apart of so many memes,

Those are just two examples of how that one picture has been used. The two captions are totally unrelated but the picture still applies. When memes like this get changed and circulate they’re breathed new life. In memes like this its mostly for humor. However sometimes like Gries points out on page 342 sometimes images meant to be powerful and leave a lasting impression, like the obama hope poster, get remixed into context far outside their intent. Like the Obamicons which mock or make spoofs of the original content there is no limit to what people can do with something they find online, apps like twitter or instagram clearly state in their privacy policy that once you post it they can do what they want with it.

With the political scene heating up the memes surrounding the candidates are circulating more and more, some hilarious, some a little crude but all making jokes on the candidates campaign. Donald Trump in particular is a popular meme character, with thousands of variations of his face appearing all over social media. 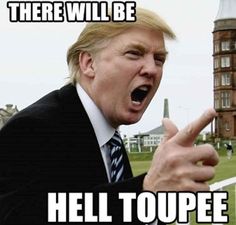 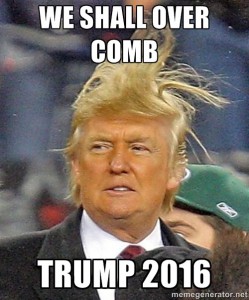