The memory of 9/11 sticks with millions of people whether or not they are from America that day is embedded in their minds. As the tragic event comes around, it stirs up many different emotions for me. I was living in Jamaica at the time when the terrorist embarked on destroying the lives of many Americans. Many people can tell you what they were doing at the exact moments when that chaos unfolded, however that is not the case for me, I cannot recall the events of that day because I cannot recall my childhood back in Jamaica– it’s very bizarre.

I have heard stories of 9/11 and seen images; however nothing compares to the Digital Archive–it is unlike anything I have ever seen. 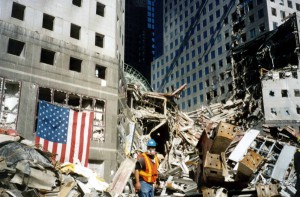 The September 11 Digital Archive is a site that tries to preserve the images from that historic day. The archive takes a unique look at how information has been collected and preserved after 9/11. The way information was once shared, publicize, and thought of as media has completely changed due to the 9/11. It has affected traveling/national security, online searching of information, the stigma around certain groups of people, and the entire mecca of media has changed. As I browsed through the archive, I was more than shocked to discover the damage that occurred on that day. Initially, when you hear of 9/11 you see the planes flying into the building but you sort of forget as to what the after effects looks like. The wreckage is unlike I have ever seen before, I look at the photos and a sense of loss, if I can call it that, overcomes me and I have a vague sense of understanding how one must feel losing their loved ones. There are no words you can tell someone who lost their loved one in that tragedy.

As I mentioned earlier, I cannot recall the horror of that day however through looking at the images, the videos, the essays, I have a sense of how millions of individuals reacted to that event. Through archiving you are able to record information like never before and have it be accessible to millions of people for decades to come. Many Gen Yers who were not present at the time are able to look back and have a sense of what happened 14 years ago. Seeing many of the images are gut-wrenching and gives you an idea of how people felt at the time which can be said for any photo that brings you back to a specific time period. I think that is what new media does seamlessly; it allows you have a behind the scenes look at an event that you would have never gotten the opportunity to see. It would remain a mystery and new media gives you that lens you need. I think another affordance of new media is it allows an opportunity to desensitize certain conversations and gives it a chance to be discussed however there are always other constraints that it gives rise to.

The events of that day did not separate Americans, it joined them together, race, gender, and sexuality was not of consideration and did not divide them. It is a shame that tragedy is sometimes the only way for people to hold hands and come together.

I’ll never have a chance to see New York City as what it once was and maybe I don’t need to. Now, it is far more important to recognize the resiliency that Americans have and to admire it and be a part of it. I don’t think I’ll ever be able to feel entirely what it means to be an American but I am a human being and as a human being I have an idea of what that loss feels like. I have to give a nod to the Digital Archive because it gave me a chance to experience what occurred that day. The development of new media will always bring a opportunity to try to understand the past however how do we truly internalize those emotions and try to start the conversation which I hope will bring a chance to heal and change this world for a better one. I am curious to know if the social media channels we have available to us now, how would that have impacted an event like that– I guess we will never know and maybe we don’t need to. . . 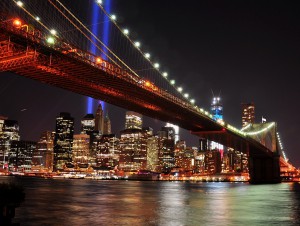 One thought on “The September 11th Digital Archive”