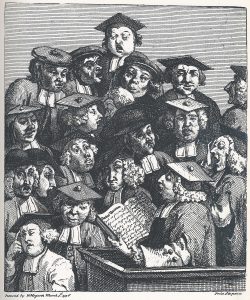 What’s happening to our discourse?

Have we abandoned all common assumptions simply for the sake of opposition?

The ‘he said, she said’ that has been at the center of much journalism for the past half-century (with the journalists as putative ‘objective’ reporters outside of that dynamic) has been turned against the Fourth Estate by a carnival barker. This is an effective tactic as practiced by Donald Trump and his minions, for it effectively boxes in the press, making anything reporters write that does not conform to administration viewpoints into something oppositional. The ‘he said, she said’ shifts, becoming a ping-pong game between press and president where once the press thought of itself simply as scorekeepers.

No longer can the press claim simply to report; now, it has to defend itself as well, returning volley for volley.

Seeing this, some on the right can hardly contain their glee. Columnist for The New York Times Ross Douthat, for the purposes of a recent op-ed, styles himself a journalist (though I don’t believe he has much experience with the shoe-leather reporting at the heart of the profession). He places the blame for the new paradigm on the press itself:

Mainstream journalism in this strange era may be freer than the fearful anticipate, but not actually better as the optimists expect. Instead, the press may be tempted toward — and richly rewarded for — a kind of hysterical oppositionalism, a mirroring of Trump’s own tabloid style and disregard for truth.

Douthat goes on to say that the “danger for the established press, then, is the same danger facing other institutions in our republic: that while believing themselves to be nobly resisting Trump, they end up imitating him,” not understanding (or claiming not to) that Trump has forced the press into this situation. They are doing “a demagogue’s work for him.” His cynicism about the profession comes through in his final, smug plea, “Fellow journalists, don’t do it.”

To not ‘do it,’ however, requires a complete revamping of the profession—something Trump is counting on not happening. Something that Douthat, also, knows is unlikely.

For the last quarter of a century, one of the only voices continually advocating for a change in the practice of journalism—and showing ways of doing it—has been New York University journalism professor Jay Rosen. His tenure as a working journalist (like mine and like Douthat’s), however, was not particularly long, opening him up to accusations of being an outsider who really doesn’t understand the travails of the front-line reporter. Such a charge was levelled against him again today, this time by New York Times reporter Glenn Thrust.

Earlier today Glenn Thrush of the New York Times told his colleague Maggie Harberman that he has known [White House Press Secretary] Sean Spicer for years and he is a total pro. So I just said to him on Twitter: hey Glenn, I thought you said this guy was the consummate pro, followed by the link I just shared with you [about his rant at the press about attendance at the inauguration].

His reply: “Jay… come down here and do it yourself… How many deferments have u applied for in this war?”

Ignoring the intended insult, Thrush’s retort makes me think that the likelihood of real change in journalism—for the better, at least—is not likely to happen, not even in the face of the concerted attacks of Trump and his minions. Not unless attitudes change dramatically.

The sense of being in the trenches, of hunkering down for a fight does the profession no good, no more than feeling that only those who have ‘been there’ can understand what they are going through. Outsiders like Rosen, like Douthat and like me haven’t a clue what they go through–or so they think. Unfortunately, this pull-up-the-drawbridge mentality leaves the profession no place to turn to, when what it needs is exactly that, outsiders around new corners with ideas of new ways to collect and report the news.

The situation today certainly demands a new type of journalist, not simply a continuation of the old with a set idea of what the profession should and can be. Rosen has been advocating for new types of journalism since before he and “Buzz” Merritt tried to institute ideas of “public journalism” at the Wichita Eagle more than 20 years ago (I wrote about this in a chapter, “The Movement Toward Public Journalism” in The Rise of the Blogosphere). He cares more about change for the better more than he does about protecting those in the profession.

As I’ve been writing this, Rosen has posted “Send the Interns,” a piece expanding on something he suggested a couple of months ago, that the most junior journalists, not the most experienced, be sent to cover the White House. Not really tongue-in-cheek with his advice, Rosen exhorts the news media to refuse to cooperate with their own delegitimization  at the hands of entertainers and manipulators:

They can “switch” systems: from inside-out, where access to the White House starts the story engines, to outside-in, where the action begins on the rim, in the agencies, around the committees, with the people who are supposed to obey Trump but have doubts.

This, as Rosen and any student of journalism knows, is an expansion of the methodology of I. F. Stone, who buried himself in government documents and the expertise of unheralded bureaucrats rather than running for the spotlight as so many modern journalists do. It takes work, though, and time—not something that many journalists, who themselves love the limelight and the chance to hobnob with the rich and famous, are willing to commit to (certainly not in anonymity).

For this coming semester, I am already restructuring my journalism course to reflect the changes ‘fake news’ is forcing on the profession—but I think I am going to have to do much more. My students, after all, are the interns (or intern wannabes). Instead of simply sending them in, what I need to do is illustrate the problems and ask them, as young outsiders with an interest in the profession, what they can come up with as possible solutions. I’m going to try to give them the respect that I, as a student in the sixties, demanded of my own elders.

Maybe I can learn something. Maybe we all can. We can’t simply continue down the same old path.