During my high school senior years i discovered spoken word poetry. i found it invigorating and the perfect excuse to voice my opinions on matters that i would not normally speak about in public. Conversations such as race, inequality, politics, sex and feminism, that would normally be offensive, were uncovered to the ears of those who would shy away from them. Spoken word poetry was my escape from societies unspoken rules on what one should and shouldn’t speak on in public. It was also the reason that i chose to do this poetry class, other than it fitting a CUNY requirement. One of the spoken word poets that we covered and that i connected with was Elizabeth Acevedo.

Elizabeth Acevedo is a New York times best selling author of the award-winning novel “The Poet x” as well as the holder of other awards. her poets explore the demographics of Dominican people and African people. exploring history and comparing it to now. One of my favorite poems she wrote is entitled “Hair” . With its strong meanings, such as appreciation of past; slavery and self love, in my opinion it is one of her best poems. Having natural hair like her, i find myself connecting with her messages on a more personal level. I would describe spoken word poetry as song without any musical background, just the lyrics, flowing to the speakers own rhythm.

Definition: a rhythmic sequence or flow of sounds in language

I looked up the word Cadence because of curiosity of its meaning. knowing its definition helped the poem be more understanding to me

Definition: to secure tightly, to bind.

Found in: “hair” by Elizabeth Acevedo

Definition: an assemblage of members (such as beams) forming a rigid framework

Found in: “hair” by Elizabeth Acevedo

I chose this word because it can be used in two different contexts.

I chose the word Gluttony because i was not sure of the meaning.

Definition: to burn sluggishly, without flame, and often with much smoke. another meaning is to show suppressed anger, hate, or jealousy

I looked up the word smothering because of the way it was used in the line.  in the poem it seems like it was used to describe a feeling.

Julia Alvarez was born in New York City in the year 1950, but three months after her birth she and her family moved to the Dominican Republic. The decision her parents made, as they preferred living under the dictatorship of Rafael Trujillo, compared to life in the United States of America, this decision soon backfired on them. A year later in 1960, they were fledding the Dominican Republic back to the United States, this was because of Julia’s father involvement in a group that was plotting a coupe on then president, Trujillo. Arriving in the U.S  Julia experienced a lot of culture shock and bullying due to her Spanish accent. besides her rude returning and welcoming back to America, she excelled in her studies. attending Bread Loaf School of English, Syracuse University and Middlebury College. with a passion for writing, she published her first novel “How The Garcia Girls Lost Their Accents” and it landed her success.  after her first success, Alvarez continued writing novels and poetry such as, “in the time of the butterflies” which was made into a motion picture, some poetry, “Papi working”, “Homecoming” and more. on her website, https://www.juliaalvarez.com/about/, something that stood out to me that she stated was “I also discovered the welcoming world of the imagination and books” despite her tough entry into life,  she found herself within books and her imagination. 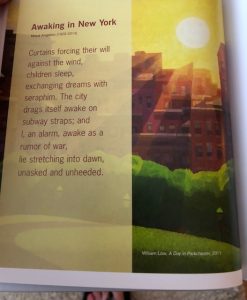 ‘Awaking in New York’ was written by the astound Maya Angelo. Written on a dull backdrop of what seems to be a rising sun on buildings, my initial reaction to reading this poem is, “it’s about waking up in New York City, and the routine that people working and the living in New York City experiences” but, after reading the poem and analyzing it I realize the meaning underneath the surface that it portrays is much deeper than that. In a somber and what one may describe as a depressing tone, this poem explains the lonely and depressing feeling that people feel from routine and from lack of control in their life. “Curtains forcing their wills against the wind” (lines 1-2) shows the imagery of the curtain flowing as the wind blows. an innocent image it portrays, but what the speaker is actually speaking about I believe is the troubles of life pushing through as the “wind”, and the “curtain” as people is trying to fight against it but is failing.” I an alarm, awake as a rumor of war/ lie stretching into the sun unmasked and unneeded” (lines 8-11)  the comparison to an inanimate object, shows the lack of care the speaker has for himself or herself. the poem is written in the first person, because of the use of the letter “I”, which makes the poem more relatable to subway passengers who might feel that way, because there is no gender attached. I believe this poem shows the robotic life that people inhabit as they make a step into adulthood, the stripping away of innocence and simplicity of life that we normally have as children, is removed and we become a hard surface, lacking the love, and care that we used to have as children.

Derives from the Ebb

Definition: the reflux of the tide toward the sea

Source: ” Pity me not because the light of day” by Edna St. Vincent Milla, line 6

Definition: a dense growth of shrubbery or small trees

Found in ” Pity me not because  the light of day” by Edna St. Vincent Millay, line four

“thicket” helps me understand the scenery in this poem. it describes the geography.

Definition: To speak or cry out with mockery

The word “Jeer” meaning mockery, helps me understand that the “person” in this poem holds a lot of respect for the “woman” he is speaking of.