Definition: A distant view through or along an avenue or opening

Found in: All American Girl (Line 27)

Meaning in Context: “I couldn’t keep the southern continent / out of the northern vista of my eyes, / or cut my cara off to spite my face.” It is trying to convey that she couldn’t forget where she came from. She is not literally looking at the continent but she sees it in her mind while looking forward towards the future.

Definition: A gap in one’s memory.

Meaning in Context: “but what they / mean is we’re the best at swallowing amnesia, in a cup of / [Spanish], dreaming because we’d rather do that than live in this reality…” I believe what the speaker is saying is that they would rather forget and live in a dream than face truth. One cannot physically swallow amnesia but it trying to convey that it is a willing forgetfulness.

Definition:  Korean dish similar to a Western stew. There are many varieties; it is typically made with meat, seafood or vegetables in a broth seasoned with gochujang, doenjang, ganjang or saeujeot.

Source: Wikipedia (I know it is not 100% credible but since it is a foreign word I lack a proper source.)

Meaning in Context: “My korean name / is the star my mother cooks into the jjigae / to follow home when I am lost” Her name is not literally cooked into this stew but it is referencing that her culture, her name, is being remembered when this stew is made.

Meaning in Context: ” Grace is not / her pseudonym, though everyone in my family is a poet.” This is saying grace is not a pen name that a poet or writer would usually use, it is her real name. But in reading the poem it is clear that it IS a fake name made by her mother to hide her  Korean origins.

Definition: to open or part widely

Found in: Field Trip to the Museum of Human History (line 7)

Meaning in Context: “we shuffled in the dim light / and gaped at the secrets buried / in clay, reborn as warning signs.” In this context I believe it’s referring to their mouths being open in shock or surprise at what they are seeing. It adds to the story that they are surprised to see such things meaning they are not common in their current civilization.

Sylvia Plath led a very interesting life. To start at the beginning, Sylvia was born on October 27th 1932 in Boston Massachusetts. At a young age of 8, Sylvia’s father died which is attributed to her writing of her poem “Daddy“. Continuing Chronologically, she attended Smith College where while a student she attempted her first suicide attempt at the age of 20 where she took sleeping pills and went basement of her house. Unsuccessful, she stayed in intensive care for 6 months after. She then moved to Cambridge England in 1956 where she promptly married a man who was also a poet, Ted Hughes. She published her set of poems in 1960 named “Colossus“. That same year she had her first child Frieda, and shortly after in 1962 she had her second child named Nicholas. In June of that same year Sylvia Plath had a car accident that seemed to be another suicide attempt. Also that same year she had found out that her husband was having an affair with a woman named Assia Gutmann Wevill. After these events she was severely depressed and in 1963 was found dead in her home by suicide. She had left a note for her neighbors to call for a doctor, while she left her head in the oven with the gas turned on and her children safe in another room. Sylvia Plath was deeply disturbed and had a traumatic series of events in her life, while quite tragic, led to great literary works. A lot of her works were not released until after death. She is also the first person to receive a Pulitzer prize after death. 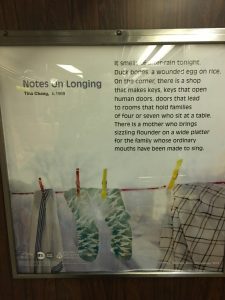 The Poem I had found was Notes on Longing by Tina Chang on the R train towards Queens. This poem has a very strong theme of family which is also reinforced by the imagery associated with it. In the first couple of lines the speaker says “It smells of after-rain tonight. Duck bones, a wounded egg on rice.” (lines 1-2) It is describing a nostalgic sense of smell with imagery of after a rainy night. The nostalgic or sense of home and family is continued as the speaker describes a local shop. “On the corner, there is a shop that makes keys, keys that open human doors, doors that lead to rooms that hold families.” (lines 3-6) This ties in the local shop into a theme of family. Next the speaker describes what might be a regular dinner in that area for a family. “There is a mother who brings sizzling flounder on a wide platter for the family whose ordinary mouths have been made to sing.” (Lines 8-11). This rounds out the poem to an almost reminiscent scene of a family. The reason i stretch to say its reminiscent is because of the title.

What I interpret the title to mean is that the author or speaker is longing for this imagery described, Of a familiar neighborhood, with familiar sights and sounds. With a mother who cooks familiar foods. The picture associated with it is that of a clothing line with clothes drying which one could say is associated with home imagery. In summation even though I personally don’t know those sights or sounds I can relate to my own longing feeling for my mothers cooking or the neighborhood that is familiar to me. Which reading while making a hour and a half commute home on the subway is somewhat saddening yet nice and nostalgic.

Definition: Ask about the health and well-being of (someone), Ask to see or speak to (someone)

Found in: My Boy Willie “That I might enquire for my sailor boy” (line 12)

Meaning in Context: The mother was asking for information regarding the character in the story named Willie, the asking of information is to enquire.

Found in: The lonely Child “A seeker in search of solace.” (line 19)

Meaning in Context: in context to the lonely child character in the story what makes him lonely is searching for a place of quietness and void of people creating the feeling of Solace.

Definition: the ebb [usually singular] the period of time when the sea flows away from the land the ebb tide

Found in: Pity me not because the light of day “Nor that the ebbing tide goes out to sea,…” (line 6)

Meaning in Context: Ebbing is used to describe the movement of the ocean coming in and out, in this case out which may be symbolic for time or a general sense of something leaving.