Definition: to put to death, especially by hanging, by mob action and without legal authority.

“ Proud to belong to a community

of gringos who want them lynched

The speaker is being sarcastic in this poem. He is saying that the people of his country always dream about coming to America to fulfil their  dream life even though most of it are fantasies they thought of while in their country; such as living in a community of non-Hispanics. The speaker sarcastically added by saying those people would want to hang them.

Found in “Instructions on Not Giving Up” by Ada Limon

“ More than the fuchsia funnels breaking out
of the crabapple tree, more than the neighbor’s
almost obscene display of cherry limbs shoving
their cotton candy-colored blossoms to the slate
sky of Spring rains, it’s the greening of the trees
that really gets to me.” line1/line2/line3/line4/line5/line6

The speaker is saying that more than all those things that he/she listed including the indecent display of the cherry limbs shoving their cotton candy-colored blossoms to the slate sky of Spring rains that may make them feel good, it’s the greening of the trees
that really gets to them; where he/she means its the results of whatever is done that makes them feel better than those things.

Definition: a person, especially an American, who is not Hispanic or Latino.

The speaker is saying he is proud to be in a community of non Hispanic or Latino people.

Andrew Grace is the poet that I chose to write about because of my interest in his poem called “Not a mile”; and I also find him very relatable as a person. Grace grew up in Illinois on a farm right outside of the town Urbana where he lived with third-generation farming family. Growing up, Grace’s main interest was punk rock music. His intentions weren’t really focused on becoming a poet because he hadn’t known for sure if that was what he wanted to do however he claimed that he was somehow hoping to be a poet at some point in his life, since living on the farm, he always felt a void that needed to be filled in and now as a poet and having a way of expressing his thoughts, he has been able to fill that void. Grace recalled only reading three poems his whole life before attending college.  Grace attended Kenyon College in 1977 where he studied poetry, with little knowledge of what it entails. While in college, his father died which pushed him even further into poetry; additionally, the loss of his father became his driving force to pursue this career. While attending Kenyon college he met his wife in his junior year who he now has formed a family with, with the addition of their daughter. According to his biography, the book “Sancta” is one his most famous works which was published in 2012, a book that is about the landscape that he grew up in. His work had also been recognized by many famous poets such as Duncan, Eigner, Oppen, Bronk, Niedecker, Revell, Giscombe, Gizzi, and Hillman. When describing himself, Grace seems to be in disbelief at how far he has come in his career. He now has a PhD and is a candidate at the University of Cincinnati. I think that Andrew Grace is a phenomenal poet and I can see why other readers like myself would be drawn to his work; not only he came from a small and became very successful, but he was able to fill an emotional void with a fulfilling career by following his passion which makes him even more relatable. As a reader that’s from a small town as well, reading his biography made me feel like I can accomplish anything that I put my mind to and know that other readers may feel the same way. It’s also an example of how setbacks can sometimes be a push; the same way his father’s death motivated him to achieve his goals.

Definition: a small piece of linen, silk, or other fabric, usually square, and used especially for wiping one’s nose, eyes, face, etc., or for decorative purposes.

Found in “Folding My Clothes” by Julia Alvarez

“ my panties strictly packed into the size
of handkerchiefs on which no trace
of tears showed.
” line7/line8/line9

The speaker is using handkerchief as a reference to size, by referring to something small.

Definition: any bulbous plant belonging to the genus Narcissus, of the amaryllis family, having showy yellow or white flowers with a cup-shaped corona.

“ One narcissus among the ordinary beautiful
flowers, one unlike all the others!  She pulled,
” line1/line2

The speaker is saying this specific flower stood out among the other ordinary ones of the same kind that was pulled.

Definition: a person who repairs and maintains machinery, or motors.

Found in “I Hear America Singing” by Walt Whitman

“ Those of mechanics, each one singing his as it should be blithe
and strong, ” line1/line2

Mechanics are known to be strong and smart because they work on big machinery. In this poem the speaker is talking about the different jobs that makes America the place it is because everyone is always working everyday and that is what he hears. 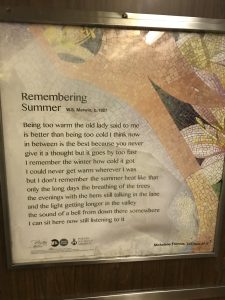 While riding the Lefferts Boulevard “A” express train I came across a poem called “Remembering Summer” written by W.S, Merwin and decided to use it for my Poetry in Motion Blog Post #1. This poem is definitely speaking about the summer and winter seasons because of the title “Remembering Summer”. My initial reaction to this poem was a feeling of warmth and uncertainty as to the speaker`s preferable season between summer and winter. This was because I interpreted the poem as the speaker describing how short the summer season is compared to winter. The poem starts off with “Being too warm the old lady said to me/ is better than being too cold” (lines 1-2). An old lady said to the speaker that she prefers to be too warm than too cold. The speaker says “I think now/ in between is the best because you never/ give it a thought but it goes by too fast/ I remember the winter how cold it got/ I could never get warm wherever I was/ but I don’t remember the summer heat like that/ only the long days the breathing of the trees”(lines 2-8 ). The speaker is saying that the summer is so brief that he/she can’t remember much about it, but the winter is so long that they can almost remember everything because of the difficulties of finding warmth. The speaker feels that if it was between warm and cold, they would be happier and would bring more pleasing memories. The theme of this poem can be the difference in temperature preference. The old lady prefers to be very warm than very cold, while the speaker prefers to be between warm and cold. I think that this poem was chosen for subway riders to get them to think deeper and dissect this poem and look at the true message that’s behind the poem; although it is about weather preference, when you look deeper, I think what the speaker is saying is that the good time such as warm summer days goes by so fast that we don’t even remember the heat that comes with it and because the winter last so long, we can definitely remember all of the days spent trying to remain warm, in other way, in life, one must learn to be in the moment and enjoy the good times for they go by so very fast, then we’re right back to dealing with the challenges and stress that life have to offer. A lot of people ride the subway to  and from many different settings, such as work, school, the hospital and once they get to that setting, they have to deal with so much and therefore that short period of time being in the subway, maybe they can be in the moment and try to have that piece and even meditate because the train ride goes by so fast and many times we forget our ride to school or work but remember the stressors we have to deal with once we’ve reached our destination and depart that train. I think this poem is accessible for general readers because I have googled it and have found it on various webpages. The only question I have about this poem is “Why didn’t the speaker spoke about other seasons such as fall and spring?”.

Sob: to cry or weep with convulsive catching of the breath

The word sob is used in the poem to describe while the female(subject) was crying, she was taking repetitive breaths.

Pit: a hole, shaft, or cavity in the ground.

Found in, “Persephone, Falling” by Rita Dove  (line 13-14), “This is how easily the pit opens. This is how one foot sinks into the ground.”

The word pit used in the poem to show that if kids misbehave bad things can happen to them.