Knowing that the word gluttony means greed it helps connect the two stanza when she said” I confess.i am greedy: if someone  has looked……” basically  with using the term gluttony  she saying she is greedy , she shouldn’t have to change who she is , everyone has to see her for who she is.

Definition: Give a new name to.

knowing the definition of the verb rechristening , it’s help me get a clearer picture of what the speaker is trying to say about her father. She implying that as a Asian person, once they move somewhere , they have to change their Asian name to an American name cause people can’t pronounce it and even she wanted to change her name.

Definition: another way or term for hamerkop; a brown African marshbird related to the storks, which has a crest that looks like a backward projection of the head, and constructs an enormous nest.

This particular word had me confuse while reading the poem because, at first I though it was referring to the striking part of an hammer, then i thought of hammerhead shark. So I had to look it up to see exactly which meaning of the word fits best for what the poet was trying to say.  I figure hammerhead or hamerkop was just a metaphor for who ever was calling her name, since an hamerkop has a long bird beak.

Definition:  the act or process of reclaiming

The definition of the word reclamation, helped me get a clearer more understanding of that specific sentence in the poem.  Acevedo’s message is don’t try to fix something that isn’t broken. She speaking to everyone whether u are Latina, black or what ever race, don’t ever listen to what someone else has to say and that you don’t have to change anything about yourself or appearance.

James Mercer Langston Hughes, was born on February 1, 1902 in Joplin Missouri. At a early age he found himself moving state to states.  His parents got a divorce at a young age, resulting in his father moving to Mexico, and him being move Lincoln, Illinois with his grandmother then to Cleveland,Ohio with his mother. Hughes found his passion for poetry in Illinois while living with his grandmother. Fast forward to his later life,  Hughes was first started getting recognized in 1920s during the ” Harlem Renaissance” , in 1926, he published his first poetry book ” The Weary Blues”. Despite being recognize as in  ” important literally figure” , Hughes early works was criticizes by many black intellectual, for portraying a different view of black life.  It so much to say about someone’s life that a blog post can’t cover.  Langston Hughes was more than an American poet, he was a novelist, fiction writer, playwright and a social activist. His works brought an insightful portray of black life in America during the Renaissance.  In addition to his poetry works, Hughes wrote eleven plays, countless work of prose.. Hughes once said ” … the only way to get a thing done is to start to do it, then keep doing it, and finally you’ll finish it,….”. On May 22,1967 he died of complications from prostate cancer.

“I, Too.” Poets.org, Academy of American Poets, 9 June 2017, www.poets.org/poetsorg/poet/langston-hughes 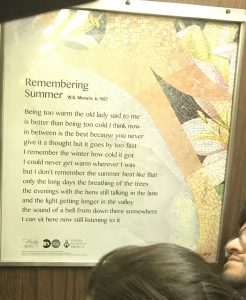 I have came across many poems while riding the A train, but ” Remembering Summer” by W.S Merwin was the only one that really caught my attention and spoke to me.  While reading the poem I noticed there are no punctuation marks throughout the poem, I asked myself what is the speaker  trying to say or why is the poem written this way. The poem  makes a comparison between the season.  In the poem, it says ” in between is the best because you never give it a thought but it goes too fast ” ( lines 3-4)  the speaker is  referring to spring and how with spring the weather is in between not too cold or too warm. The poem is relatable because in new york, we experience different weathers, one day it might be cold, the next is hot and etc, and the speakers mentions how the seasons goes fast and how she can’t enjoy it.   Something else that caught my attention was the background picture that is being displayed. We see a leaf , with different colors and every color represent the season that the other is referring too, for example black, everyone knows winter marks the absence of color and the background displays black.  . ” the evening with the hens still talking in lane and the light getting longer in the valley (lines 9-10) But overall the poem is referring to summer how the weather is warm , the days are longer and the nights are shorter.

Definition – flavoured, distilled, colourless to pale yellow liquor made from purified spirits usually obtained from a grain mash and having the juniper berry as its principal flavouring ingredient.

Found in , ” We Real Cool” by Gwendolyn Brooks line 6.

Knowing the definition of ” gin” , I got a better understanding of what the speaker was describing in the poem, and what exactly the seven players did. As well as how the gin and sin impacted the lifestyle of the young men and how it’s wrong to drink underage.

Definition : to give or leave by will- used especially of personal property

Knowing the definition of the word ” Bequeath”,  it helps shows the difference amongst the people in the cell and how they interact with the trap and their findings.

This word is found in the essay ” Reading a poem: 20 strategies” by Mark Yakich, in the seventh strategies.

knowing the definition of the word ambiguity , helps me understand that specific strategy that is listed.  The speaker is using the word to tell the audience that there is one or more possible way of understanding a poem.