Prior to taking this class, I was familiar with spoken word poetry. It’s actually the only kind of poetry that I enjoy. I’ve gone to an open mic night at the Nuyorican Cafe in the Lower East Side a few years back. It was definitely a unique experience that I would like to repeat. The passion the poets speak with is something that the audience can feel, I certainly felt it.  I enjoy spoken word because I feel like there’s more feeling or emotion in the poem. There’s something about a poem being performed that makes it different to me than one that is  meant to be read. My least favorite poems are those written in Shakespeare’s time. I find them extremely difficult to understand as the English language was different then. I particularly enjoyed Franny Choi’s “Choi Jeong Min”. This poem spoke to me because I can relate to it. As a minority and being raised by immigrant parents, I can relate to the difficulties she experienced with her Korean name. My parents thought carefully about the names they gave me and my siblings for the reason of not being discriminated against. They knew we’d face enough difficulties being minorities and dark skinned, they didn’t want to add to that by giving us a traditional Dominican name difficult to pronounce in English like Nicaury.

She also speaks about American’s stealing our culture and selling it back to us for profit. This is something I feel strongly about and was happy to know that another minority group experiences the same as us blacks and Hispanics. Another reason I enjoy spoken word is because it reminds me of my favorite music genre, hip-hop. In hip-hop music, artist not only rhyme words but speak about real life issues. Rappers like Tupac, Common and Mos Def use a style of rapping that sounds very similar to spoken word poetry. Songs like Dear Mama and Ghetto Gospel by Tupac are indeed rap songs but have a different flow or tone and its delivery is more like spoken word poetry. I personally don’t write poetry. I tried when I was younger but wasn’t really interested in it. Although I enjoy spoken word, I don’t listen to it or watch it often. I really enjoyed the film Louder Than a Bomb because it broke the stereotype of who or what a poet should be or look like. I love that those kids used poetry as a therapeutic tool to deal with their personal issues as well as a hobby. Some even their poetry a little more seriously than others, which to me is amazing because where they came from I can imagine is very easy to get caught up in negativity.

Definition: to tie, bind, or fasten.

“The true meaning of stranded, when/trusses held tight like African cousins in ship bellies,did they/imagine that their great grand-children would look like us, and/would hate them how we do?”

This is a very interesting poem. The speaker uses the word truss to compare taming “bad” hair to the way slaves were tied together in ships. Straightening it or tying it up so that it looks more presentable-white looking in the speakers opinion. This is something i can relate to as I have curly hair and have often been told I have bad hair. The speaker mentions her mother telling her to fix her hair and by fix she meant straighten. Growing up, we considered getting out hair done straightening it as if it couldn’t be ‘done’ or presentable looking in its natural state. Understanding the definition of truss helped me understand the simile quoted above.

Definition: sharp or biting to the taste or smell; bitterly pungent; irritating to the eyes, nose, etc.:

Found in Discovering Colors in Prison by Nancy Gomez line 16

“The burnt colors of fear-more smell than color,/ vaporous and acrid.”

In these lines, the speaker is talking about a scent. Prior to reading this poem, I’d never heard this word. Anything burnt has a very distinct smell, mostly an unpleasing one. The speaker is comparing the smell of burnt to fear-both being negative things. Knowing the meaning of this word helped me to to understand the idea the speaking is trying to get across in these lines. That idea being that fear has a scent and it’s bitter.

Definition: showing luminous colors that seem to change when seen from different angles

Found in Discovering Colors in Prison by Nancy Gomez

“The iridescent scream of a sharp-shinned hawk/circling somewhere in the pastel wash/of afternoon air….”

In this poem, the speaking is using this word to paint a picture in the readers mind. Understanding the meaning of this word helped me see the picture she is painting. The hawk circling the sky, it’s scream sounding different from different angles.

Found in All American Girl by Julia Alvarez

“…I locked myself/in the bathroom, trying to match my face/with words in my new language: grimace, leer,…”(lines 4-6)

In this poem, the speaking is talking about learning a new language and culture. She talks about locking herself in the bathroom to practice and perfect matching her words and her facial expressions. She implies knowing what the word means and feels like in her native language but she had yet to feel it in English.  Understanding the meaning of the word painted a vivid picture in my mind of a girl struggling to understand and adapt to a new culture.

Definition: to look with a sideways or oblique glance, especially suggestive of lascivious interest or sly and malicious intention:

Found in All American Girl by Julia Alvarez

“…I locked myself/in the bathroom, trying to match my face/with words in my new language: grimace, leer,…”(lines 4-6)

In this poem, the speaking is talking about learning a new language and culture. She talks about locking herself in the bathroom to practice and perfect matching her words and her facial expressions. I’ve heard the word leer before but wasn’t quite sure what it meant. Understanding the meaning of the word helped me understand these lines in the poem and painted a clear picture of a girl locked in bathroom practicing facial expressions in the mirror.

Sylvia Plath was born on October 27th, 1932 in Boston, Massachusetts to German immigrants. Her father was a Biology professor and her mother was his student. When Sylvia was eight years old, her father died of complications with diabetes. Although he was authoritative and stern, she was deeply hurt by his passing. This traumatic experience led her to write one of her most well-known poems “Daddy”. This becomes somewhat of a pattern in Sylvia’s life. Anytime she goes through some type of trauma, she writes, and it becomes wildly famous. Sylvia struggled with what is now known as manic depression since she was in her teens. Her first breakdown happened as an undergrad. She attempted to commit suicide by overdosing on sleeping pills. This suicide attempt led her to become institutionalized and receive electro-shock treatments. From this breakdown, came the novel ‘The Bell Jar’ which was released in 1963, the same year she died. This is the only novel Plath released. It is a semi-autobiographical novel based on her experiences and troubles with her emotional and mental health, as well as issues within her marital and family life. In 1956, she met and married her husband Ted Hughes. Together they had two children. In 1962, Hughes left her for another woman. She again became deeply depressed and “wrote most of the poems that would comprise her famous book, ‘Ariel’”. As mentioned above, a year later, she wrote ‘The Bell Jar’ and shortly after committed suicide by inhalation of cooking gas in the kitchen of her home. Plath had a lifetime of traumatic events and mental issues. Her condition can be argued to be a blessing as it gave her the inspiration and motive to write poems that made her wildly famous. Her style of writing is associated with the confessional movement which is when poems became a bit more personal in their context. It is interesting to know that Plath received a Pulitzer Prize in 1982, although posthumously for work published by her ex-husband called ‘The Collected Poems’. She is most known for ‘The Bell Jar’, ‘Ariel’, ‘Colossus’ and ‘The Collected Poems’. It is important to know Plath’s personal life in understanding her poems and writings. “Her work is singled out for the intense coupling of its violent or disturbed imagery and its playful use of alliteration and rhyme”. 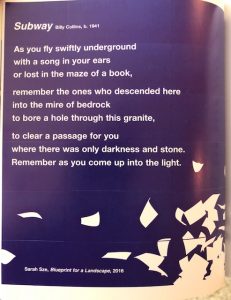 The poem Subway was written by Billy Collins in 1941. My initial reaction to this poem was ‘wow, he’s right. I never thought about that’. So often we neglect to appreciate the hard work that goes into creating things we rely so deeply on, in this case, the subway tunnels. This poem is specifically about those who made the tunnels, but is relative to so many things in life. How often do we think about or appreciate those who do the “dirty work”? Occupations like sanitation, construction, civil architects and engineers. We rely on and use their finished products in our everyday lives but how often do we stop and think about the hard work they put in? I know that prior to reading this poem, I gave them little to no thought at all. The speaker of the poem is unknown. The subject is the focus of the poem, the subject being those who worked so hard to create the tunnels. The poem is presented in white letters with a purple background. In the bottom right corner there is an illustration of what to me seems like a pile of pieces of paper, similar to confetti, beginning to disperse. The illustration makes me think of the way litter flies when a train is entering or leaving a station. I believe this poem explores consideration, or lack thereof, appreciation and thoughtfulness.

Definition: to be scattered or sprinkled over (a surface)

“…Love is no more…/Than the great tide that treads the shifting shore,/Strewing fresh wreckage gathered in the gales:”

The speaker is comparing love to the effects of wind and water in this part of the poem. The speaker is stating that oceans tides are spreading wreckage(remains of something) gathered in the wind. Understanding this word helped me understand the analogy in these lines.

Found in Pity me not because the light of day by Edna St. Vincent Millay line 10

“This have I known always: Love is no more/Than the wide blossom which the wind assails,…”

When I first read these lines, I thought assail had something to do with a sail boat. I was wrong. After looking up the word, I was able to understand what the speaking was saying. The speaker is stating in line ten that the wind assaults flowers when it blows, kind of the way love assaults the heart sometimes.