Spoken word poetry is poetry that is written on paper and yet performed out loud for an audience. I for one would like to say that this type of poetry is one of my favorites. It allows you to emotionally connect to the poet while vividly seeing there body language. It is one of the most effective forms of poetry if you’re trying to get a message across to your audience. For instance, in the movie “Louder than a Bomb”, Nova Venerable presented this poem named Cody. In my opinion it was an emotional poem. She was explaining the struggles her little brother had to go through and how she pretty much raised him as her own kid. However, her body language was Positive when she would speak of him but when she spoke on her parents contribution you could tell her body language changed along with her tone showing this deep sense of sadness.

I myself have never been to a spoken word poetry performance. I would like to go to one and experience it lively because even while watching it I get into it. It’s a well developed passionate form of poetry in which I can say I enjoy better than poetry written on paper. In class, we actually read a spoken word it was Pedro Pietri’s “Puerto Rican Obituary” and you could just tell the difference from an average poem besides the length.

Definition:  Measure the focusing characteristics of (an eye) or of the eyes of (someone)

Found in Line 20-21 of Discovering Colors in Prison by Nancy Miller Gomez : “ The colors we keep caged, a stubborn brightness / refracted off betrayal, and hate”

The definition of the word refracted helped me understand what was being said in lines 20 and 21. My interpretation was that these people were being stereotyped.

Definition: An artistic work, especially one on a large scale

Found in: ”Lady Lazarus” by Sylvia Plath, stanza 23: “I am your opus / I am your valuable, / The pure gold baby

Definition: To gaze stupidly or in open-mouthed surprise or wonder

Found in Line 6-8of Franny Choi,”Field Trip to the Museum of Human History” – “From the canyon? we shuffled in the dim light// and gaped at the secrets buried in clay, reborn as warning signs:”

The definition of the word gaped helped me understand what was being said in lines 6-8. In my opinion, I believed they were shocked with their findings.

Definition: The act or process of reclaiming something

The definition of the word reclamation helped me understand what was trying to be said. In the lines, after “Hair, a reclamation” it states : ” how I will break pride down their back, so from the moment they leave out the womb they will be born in love with themselves.” In other words, their hair shouldn’t define who they are. They shouldn’t have to change it to satisfy anyone but there own selves. To stop living up to others peoples changes and embrace yourself.

Definition: A facial expression usually of disgust, disapproval or pain

Found in Line 4-6 of “All – American Girl” by Julia Alvarez: ” I’d come from somewhere else. I locked myself / in the bathroom, trying to match my face / with words in my new language: grimace, leer / ”

The definition of the word grimace helped me understand what was being in said in lines 4-6. I believe that the speaker tried to paint this image of herself so that way she could fit into society and yet, she felt disgusted in trying to change who she was.

Sylvia Plath was an American Poet and was seen as “one of the most dynamic and admired poets of the 20th century” (Poetry Foundation).  She was a novelist and a poet who wrote confessional poetry. Her novel was called The Bell Jar. Shortly after her novel released she killed herself in 1963. Previously, around the 1950’s Plath did attempt suicide for the first time and failed at it. She was sent to a mental health facility in which she received treatment. Sylvia Plath was married to Ted Hughes and had two kids (Freida Hughes and Nicholas Hughes). Her husband ended up having an affair with another woman. According to Poetry Foundation, Plath had written a journal entry that was written on June 20th, 1958 that said: “It is as if my life were magically run by two electric current: joyous positive and despairing negative – whichever is running at the moment dominates my life, floods it.” You could assume that from this journal entry she suffered from depression or some mental disorder. I believe that her depression drove her to kill herself. I think that maybe it was over the affair or maybe she dealt with so much problems within her life that she didn’t know how to cope with it. I believe that writing made it easier for her too write how she truly felt until she no longer knew how to deal with it. Writing was her career but it was her way of living as well. 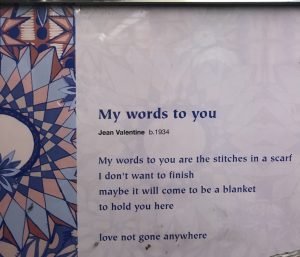 My poetry in motion poem, “My Words to You” by Jean Valentine was found on the six train. I didn’t really have an initial reaction to the poem even though I came across it numerous of times on my way home. With that being said, this assignment allowed me to analyze what the meaning was. “My words to you are the stitches in a scarf / I don’t want to finish” (Line 1-2). The stitches in the scarf is what keeps the fabric together. The stitches are symbolizing the strength in the bond you and your partner has created. “Maybe it will come to be a blanket / to hold you here” (Line 3-4) represents how you didn’t expect your relationship to get so far but yet it did, so the scarf is no longer just a scarf, you’ve turned the scarf into a blanket. The more time you spend with your partner, the more you grow, the more comfortable you get and you begin to feel at home. “Love not gone anywhere” (Line 5) is basically saying that you made your love go from something small (the stitches in a scarf) to something big (the blanket). You can make it as big as you want but at the end of it all, it will stay with you.

The title of the poem, “My Words to You” brings this feeling of comfort along with the background of the poem. The background gives you this warm fuzzy feeling when you look at it followed by the poem itself. This poem explores the nature of love and what it feels like. As simplistic as it was it was very thorough with the message it wanted to give.

Definition: To open out from or as if from a furled state

Found in Ada Limon’s poem “Instructions on not giving up” in Line14 – ” Unfurling Like a fist to an open palm, I’ll take it all”

The definition of the word unfurl allowed me to understand what Ada Limon was saying in line 14 when she said:” Unfurling like a fist to an open palm, I’ll take it all. I got the interpretation that she is welcoming the coming of spring with open arms (metaphorically of course). It represents this theme of renewal.

Part of speech: Noun and Verb

The definition of the word despair allowed me to understand what was being said in lines 26 – 28. It allowed me to understand that she wanted to hear good news about her “boy willie”. She wanted to believe he was alive but when the sailor said: ” Oh, then your boy Willie, I am sorry to say, / Has just been drowned the other day,” (Lines 21-22) it allowed me to see that all the hope she had was gone. So in my opinion the word despair was used as both a noun and a verb in this case.