My quote is “Life is really simple, but we insist on making it complicated “by Confucius who was a philosopher of Chinese history. His philosophy emphasized on personal and governmental morality，etc. The reason why I pick this quote because we often got a thousand of solutions when run up against of difficulties, but we usually pick the hardest way. We like to make simple things complicated. This quote teaches us that sometimes when we encounter problems, we need to look at it at different angles, don’t push ourselves to a dead end.

For this first design, I decided to use a diagram to emphasize my concept. It is a simple triangle with Point A, B and C .In the triangle, we have two ways to reach the ending point A from the starting point B. The first way is directly from B to A which is a simple way. The second way is from point B topoint C then finally toward point A. This design also applied to the quote thatI choose. Don’t complicate things , sometime the simplest way is the best way.For the color, I pick the red in the middle to separating the left of dark and the right of lightbecause I want to give people a sense of contrast from the background. For the text, I chose Bradley Hand ITC as primary typeface because I wanted to show that it was personal, like handwriting and I also hightlight the two words which are simple and complicated to point 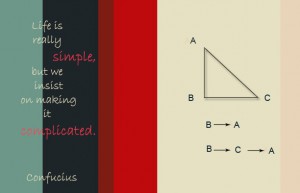 The second design focuses on comparison of the two fishermen whoe both catch fish but using different time and energies to again emphasize the quote that I choose. We often choose the harder way to solve problems and to  reach our goals. In the left fishmen,I only use a simple line for the man to catch fish to show that he use a simple way to reach the goal. On the contrary, I use some messy curves to express the right fishmen who is spenting a large amount of time and energy to achieve goals which is the complicated way.For the major color of the, I choose the most contrast color which is black and white, because I think they represents simple and complicated. 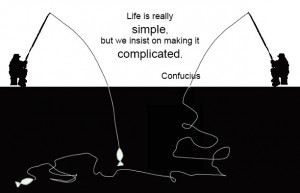 In the third one, the photo that I use comes from the picture collection in mid manhattan library.And the text I use Futura Light. 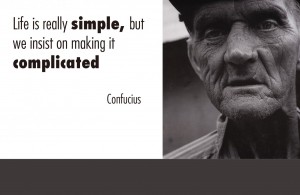 On April 15th, our class went on a field trip to visit the United Federation of Teachers (UFT) printing facility, which is in Manhattan. The purpose of this trip was for us to learn about printing process and how to design product for print. 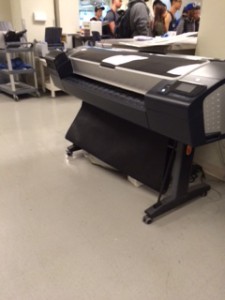 The UFT printing facility has so many different printing machines and each has different function. Our tours guide Oscar, who is the manager of printing facility. He introduced to us many different printing machines. The first machines we saw were the ESPON Pro 9800, which is used for large photos or graphic prints. The second one we saw was PRESS C8000, which is used for digital color prints and high quality print like pictures and posters. 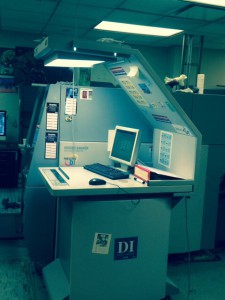 I thought the most interesting machines were the envelope printer. Oscar said this machine could easily print about millions envelopes for each day. In UFT printing facility, many people order to print for their poster, envelopes, books and so much more. They also have print jobs for school and social. Oscar also said even though they have huge print jobs for each day, but they still would make sure every product is precept. And this is why the printing facility is successful.

Overall this field trip, this was a great experience for me. I learned much information about printer and the daily operation of printing lab. And this would help me design my product for printing in the further. 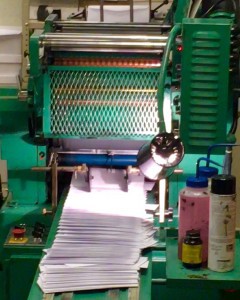 The concept behind this logo was to make the text looks simple but also with a 3D effect. My name is Alice Zhang. So I used my initials “A” and “Z” to create this logo. For the major color of the logo, I pick the color of the sky which is blue, because I think the sky represents creativity and imagination. I also mix in a little be of orange in my logo because that is my favorite color. I think orange symbolized energy, adventure and happiness.

I use iMovie to edit this video.

This video is about time. Time is precious.

Time is what we want most, but what we use worst.

And time is flying never return.