The name of my disease is buryem in first game. I started from Brazil as an accident so I chose it as a poor nation. Brazil is surrounded by lots of water which I believed could increase the possibility of transmission and death. First 100 people were affected within 10 minutes, I believed I was definately on to something. The first million people were affected within 30 minutes. The infection began spreading around the world soon thereafter. My mode of transmission was through the air and water . It spead so fast but the first death occurred within 1 hour and . I think the virus was not strong enough to kill and destroy much of the human race. In the end a total of 977 people died. In the end cure for the virus was at 15% and is estimated to be available in over a year. That seems very long. The virus did not spread to Greenland , Finland,Sweden , Baltic States or Canada. . The virus spead everywhere else in the world. Total people infected worldwide was 6,177,504,045. It is just amazing how fast the virus spread. As a wealthy nation I chose Sweden and named the Disease Buryem 2. IT took way longer to spread. I believe it took longer because of the more advanced health care.  It took over 30 mins to spread to 100 people. Did not affect 1,000, 000,000 people yet. Both games proved that diseases are more likely to spread in poorer unsanitary environments. Don’t think I really grasped the game fully  because I would have definately mutated my disease to wipe out the world but It has helped me to understand pandemic transmission.

Carrie Mae Weems  recreates  photographys by Zealys to tell a story. She uses appropriation , a technique in which modern artists borrow and alter existing images in order to give new meaning . In this case Carrie Mae Weems explores the African American experience from slavery. She uses many images of individuals in normal everyday life as a slave, I have noticed that many of her images  are depicted in black and white, some with an overlay of red. Black and white photographs tend to hide flaws . The red overlay depicts the hardship , blood, sweat and tears during slavery.  Using texts with the images conveys the exact story that Miss Weems is telling. There is a saying that a picture tells a thousand words, But a picture with text attached to it is priceless. Without texts the images would tell less of a story and each viewer would form their own opinion of  the image. The text somehow makes the story more concrete and conveys uniformity. Her photograph ” Some say you were the spitting image of evil” clearly tells me that the artist is depicting a black young whose color of her skin “black” is compared to evil during slavery. Black equal bad, nothing good even though the woman  is a human being  who has the same blood running through her veins as every other race.

I think the story that is told through Miss Weems  photographic project is modern and the subtitles for each photograph gives a clear picture of what the artist is conveying. It gives the viewer a chance to enjoy the story depicted. I enjoyed going through the gallery and the portraits are very informative especially with the text attached. 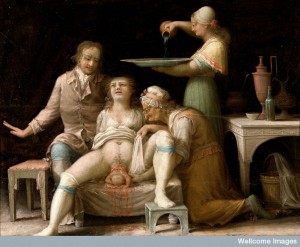 This image displays a woman giving birth at home.  The woman is sitting on a chair to give birth. The basket under the table, the lamp, chair  indicates home. She is surrounded by a man who probably is her husband , an elderly woman woman who is playing the role of midwife and a female who appears to be pouring medicine. The male figure supports her back but appears to be scornful at the same time  with his right hand flailed. Appears that he intends not to touch the blood or baby until cleaned up. The female appears to be in the final stage of labor, her cries seems lessened at this point as the  head and arms of the baby are out the birth canal. The most painful stage. This image is similar to the images reviewed showing medical students the actual functions of the body, similar to Charles Etienne dissection of women. Shows the natural body functioning during birth. It is striking that a male is witnessing the birthing process and actually participating . This to me would be considered a more modern role. I thought the birthing process would be handled by women only then. This picture strongly depicts a woman’s strength. He lower body is strongly build and is ready for the birthing role.