The name that I have my disease was TRUMP. I have played the game many times over the last week and have opened up all the other diseases, other than just a bacteria. The most success I had with the game was starting in either England or India. with India and other countries that don’t have the resources of the 1st world nations the bacteria spread a lot more easier. When I started out in England I found that the disease didn’t spread as fast as in the case with India, but it spread to other nations faster, because of all the transportation that does to England. Usually after the first few days I was able to spread the epidemic to a few hundred people. By using the DNA points to make it disease easy to spread through animals, and air, and using the lung symptoms proved the best way , and easiest to get as many people contaminated. after the first month or two i was able to have a few million people contaminated. I usually wait to have at least 2/3 billion people infected worldwide before I started making the disease deadly. Also the speed that the cure was being manufactured and studied made me make the needed changed to the symptoms that it becomes harder to cure, and kills more people, hopefully destroy the country that is trying to find the cure. once i made the disease more deadly it usually was about 2/3 weeks to have a million deaths. I found that in making the disease to deadly killed off the infected people at such a rate that the disease killed it self of. I made TRUMP very easily to be contaminated, first by making it easier to be spread through the air, but also made sure that TRUMP had the properties that it could travel through water, since air travel is the first thing to close when the disease starts spreading and becoming a pandemic. I always waited for at least half the population to be infected before making the symptoms to have  fatal effects on the infected. I found it to me fungus the hardest option to kill off the world. I have killed the population of earth about 15 times since I started playing the game on Tuesday. The fasted result I got in destroying humanity was 552 days, the longest game that I won, humanity lasted 1700 days before everyone was killed off. Certain plague types are easier to infect and spread then other. The fasted and most devastating plague that I was able to destroy humanity with was the two man made ones, Nano-Virus and Bio-Weapon, I don’t remember how many days it took me to destroy humanity but it was faster then 552, but that was best one I could remembered. This game was very helpful in understanding how a plague can wipe out humanity, specially one that we humans made.

The images by themselves are very powerful, I like how with the words the artist is trying to take and change the messages of those pictures. Some of those pictures are very hard to look and bring anger to myself as being a man who has witness racism and had it happen to me. I can see how the original purpose of these pictures was to make these men and woman not human, but like the scientist intended was to make them a whole different species.   With the words in the pictures they portray a new meaning, like she became the owner of these pictures. I think that those pictures like just in the past have a very powerful message. With all the things that have been going on in this country, with the words that are being spoken by people like Trump and Ben Carson, we need to remember that this was part and still is part of our history. Some people, mostly white people, seem to think that racism is over in America, These pictures and the words written in them are very powerful, she is speaking the truth, facts, and history, of the African American experience is America. The image with the slave with all the whip marks is powerful! I like how she is trying to own these pictures and making the viewers think about the individual in the pictures that they are humans, that they weren’t just property, and how they help make this country. Very powerful images. 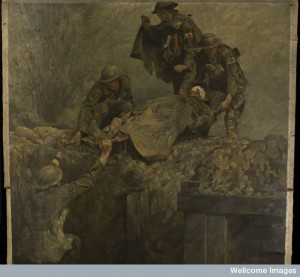 L0050213 World War I: stretcher bearers of the Royal Army Medical
Credit: Wellcome Library, London. Wellcome Images
images@wellcome.ac.uk
http://wellcomeimages.org
World War I: stretcher bearers of the Royal Army Medical Corps (RAMC) lifting a wounded man out of a trench. Painting by Gilbert Rogers.
Below, a trench in which a man stands lifting one end of a stretcher over the top of the trench. Above, three man receive the stretcher, on which lies a man with his face covered with a bloody bandage. Left, a shell explodes. The background is buff, the trench and the figures are predominantly grey, yellow and green, giving an impression of mud everywhere.
Of the men in the upper half, two have armbands with red crosses on a white ground, in addition to uniform badges with red crosses on, while the third, on the left, has only the red cross badge on his uniform, and no armband.
The body of the man on the stretcher is foreshortened to show the soles of his boots, a device also found in paintings by Mantegna, Borgianni, and Rembrandt.
1919 By: Gilbert RogersPublished: –
Copyrighted work available under Creative Commons Attribution only licence CC BY 4.0 http://creativecommons.org/licenses/by/4.0/

The imagine I have chosen is, World War I: stretcher bearers of the Royal Army Medical. I chose this image because of how powerful it is to me, and also because most medical advances have been an achievement of warfare. Throughout history almost every medical advance has been something that has come forth because of human’s capacity to kill each other with the most creative ways that we can think of at the time. But with all the evil, and torment that are associated with war there has been some good that has come out of it. Almost every major medical breakthrough that has been achieved by human beings has come about because of war. Through ways to treat trauma injuries, mental disorders, and infections, the cures have come because physicians and governments are looking for ways to save their fellow citizens from certain ravages of war. From the first medic/shaman that first treated injured soldiers in ancient battle fields in the near Middle East, to the advancement that we have today. The military has been the testing grounds for certain procedures, theories, and innovations of already existing techniques and equipment. For as long as there has been warfare, there has been men who try to help the wounded men heal. Most of humanity has benefited from all the medical discoveries that have been made through battle fields’ hospitals and research to treat those that have come home with physical and mental wounds.