At my first go with Plague I decided to name my bacterial disease ‘Toxy Roxy’ and I started her in Egypt. The start date was October 17th 2015 and by December 12th it had infected 100 people, just over a year later on November 4th it infected 4 million people, the 1 million mark escaped me. The first death by Toxy Roxy was on August 5th 2016 so I think the one million mark would have been between August and November. The disease spread so fast it managed to wipe out the human race in just 588 days, something I am rather proud of. The second game I played I created ‘Brocco’ on October 20th 2015 and put him in China. I immediately noticed that Brocco spread faster globally whereas Toxy Roxy spread faster continentally. Since China is a richer country than Egypt it was understandable that this would happen seeing as thought they have more international travel and trade. The first 100 people were infected by December 24th 2015, a similar rate to Toxy Roxy, just a tad bit slower. Brocco had infected 1 million people by March 25th 2016 and the first death by Brocco occurred on February 17th, 2017. In a mere 681 days from his creation Brocco wiped out the human population. With Brocco I knew that the first death took longer because I was focused on evolving transmissions rather than symptoms. I did this because after creating Toxy Roxy I played a few more times and had a game where I infected 75% of the world but my symptoms were so deadly that everyone died and the disease eradicated itself. So from that game on I learned that a good tactic to play is to spend DNA points on transmissions rather than symptoms because the symptoms will evolve on their own. This technique works it just seems to go by slower since the first death takes a while so I just put it on fast forward and watch the world come to its demise.

The compilation of images in Carrie Mae Weems project “From Here I Saw What Happened and I Cried” conveys a strong message, in my opinion, of the ironies and tragedies faced in the lives of African Americans. I think it’s a soulful depiction of a soulless time in American history. The images show the ill treatment and stereotypes that African American slaves had to live with while the text pinpoints the genre to specific references. Upon first watching the video I was moved and then angered at the fact that people have been treated so inhumanely and continue to be treated this way and in other forms of dehumanization even in today’s modern world. In this specific photo set it’s daunting to think that these people were unwillingly objectified like this and that they represent only a small portion of an oppressed population. Between the image and the text on each individual photo, the text is what first captured my attention. I had to first read the text, analyze the image and then look at the overall product. It’s not really effective if you were to just glance over the whole thing reading and looking at the image at once. If there were no text over the image I feel as if the message of the collection would definitely be more open to interpretation. The text solidifies Weems intentions of creating the exhibit. 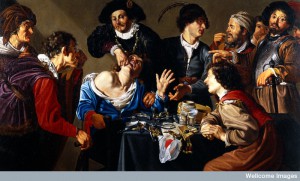 L0021970 An operator extracting a tooth. Oil painting by an unidentif
Credit: Wellcome Library, London. Wellcome Images
images@wellcome.ac.uk
http://wellcomeimages.org
An operator extracting a tooth. Oil painting by an unidentified painter, 16–, after Theodor Rombouts.
Paintings and other records from the 16th to the early 20th centuries capture performers in action. In the 17th century, travelling actors worked in troupes as a support act to specialist tooth-drawers who were themselves part of the act. These operators often had craft skills, experience, and expensive specialist instruments, like those shown on the table in this painting. Because they worked outside the guild system of locally established surgeons, the latter often tried to protect their own business by dubbing the interlopers as charlatans or quacks and taking them to court. However, the travelling dentists performed a useful service, were often brilliant entertainers, and were therefore a very popular and welcome presence at fairs and markets.
In this painting, the leader of the troupe, near the centre, is a roving dental specialist, performing or pretending to perform a tooth extraction. He is surrounded by his companions who pretend to be casual bystanders. The composition was the invention of the short-lived Flemish painter Theodor Rombouts (1597-1637). He had worked in Italy where he learnt the technique (called Caravaggesque) of composing horizontal groupings of half-length figures in action, as here. Such paintings usually illustrate some illusion or deception: here the man in the right foreground is being gulled by all the other people, in an attempt to get him to volunteer to have a bad tooth extracted, or to buy a medicine to ease the pain.
Oil
1600-1699 By: Theodoor RomboutsPublished: [16–]
Copyrighted work available under Creative Commons Attribution only licence CC BY 4.0 http://creativecommons.org/licenses/by/4.0/

Fear is instilled in us as children that if you eat too much candies and chocolate your teeth will turn rotten and fall out or the dentist will have to pull them out, and when you have a tooth ache or a loose tooth it is a common practice to pull those teeth out more quickly by tying one end of a string around your tooth and the other to a doorknob and then slamming the door shut to yank the tooth out. Either way of having your teeth removed are unpleasant. The image here shows an “operator” extracting the tooth of a young man, the reason probably being a toothache or rotten tooth as aforementioned. The procedure is being made a spectacle for 8 other men who are probably trying to learn the technique. This image stood out to me mainly because of the comical aspect, the operate has a smirk on his face while the man sitting on the right has a distinguishably perplexed look on his face as he is trying to figure out what is really happening. The patient himself looks far from comfortable and is looking directly up at the operator as if he wants him to stop. He is even trying to wave his hand in discomfort but the operator is pinning his arm down to the table. Compared to the images we have looked at in class this one is certainly on the brighter side; because having a tooth pulled is something most people have experienced it’s more relatable than an image of the plague of the coming of Jesus Christ.