Playing this game was really fun and interesting. Initially was a little hard to understand the process but after a few tries I got the hang of it. I named my bacteria XWORLD, hoping that I would be able to eliminate the human race. On the first game I started in China since the large population would contribute to the extent of the spread. I try to keep an eye on the news and see how I could use them to help spread the disease. I started the game on October 17, 2015. About 150 people were infected on day 62. in three months there over 120.000 people infected. The first death took place about one year later in China. During the game one i tried to use all the points to my favor in order to potentiate the effects  of the bacteria. It was so obvious how quickly the disease was spreading especially in highly populated areas. I used my DNA points for the symptoms, but that was not enough. Pretty soon the cure was developed and I was not able to eradicate the human race, unfortunately.

On my second try I wanted to start in Canada, since the climate is a little cooler and the population is lower than China. Starting date of the game was October 17, 2015.  About 100 people were infected on day 45 and by five months period over 100.000 were infected. During my second try I keep some of the symptoms hidden, trying to see if that changes the course of the disease. It seemed that if the symptoms were not noticeable the disease spread quicker. regardless of many adjustments that I made, the bacteria was not deadly yet to eradicate the world. Because I started in a cooler environment and less populated than the first one, this allowed for the bacteria to be slower in spreading and the cure was found faster this time around. So, unfortunately I ended up killing less people this time around not able to eliminate human kind.

What is so interesting about this game is that it gives us a visual idea on how the disease spreads, and how easy it nowadays considering air travel. If a bacteria of virus were to be deadly in nature, the humanity can truly suffer and elimination can be a potential outcome if the cure is not developed on time.  Stopping the transmission can break the cycle and allow enough time for cure to be developed.

I will give this game few more attempts until I eliminate humanity…. Interesting and fun game to play.

Watching the brief video and the images of Carrie Mae Weems “From Here I Saw What happened and I cried” , takes me back in time while stirring up a lot of emotions. It takes all of us in the past and reminds us of the lost moments. I can see how powerful these images can be and how anyone can choose to interpret them, its strictly personal. With her artistic addition to each image she gives the viewers such a blunt confrontation with history. The images in black and white reflect a sad and the realistic truth of the racism severity. The dehumanization on the photos is unfortunately clear, but  when she adds the red tint to photos it seems to give the images a unique sense of unification.

The choice of red has obviously a special meaning to her, because it represents so many emotions in one single color. The anger, the passion and the blood, are all extreme feelings that meet in one image. The addition of text to the already powerful images makes so vivid and outrageous at the same time.  It is clear that the subjects on the prints are completely dehumanized and lack the individual power. What she does with the words across the images is as if these subjects are being vocal. Each image has been carefully labeled with a meaningful emotion.  Her work is so raw and unique, that allows anyone to interpret them subjectively. Her work supports the existence of racism and the social injustice. Through her work I was able to see how powerful photography can be, how colors make such a difference in interpretation, how the shape of the image gives the sense of the past.

Wellcome Library offers a variety of images to choose from. I chose an image called Pian Fungoide by Jean Luis-Marie Alibert that was published in 1806 in Paris. Jean-Louis Alibert was a dermatologist born on 1768 in southern France and died in 1837. Pian Fungoide was a term used for the first time by him and the name came from the fact that this condition had skin lesions that resembled the mushrooms. This picture is a profile drawing of the face of a middle age man, that has large deep brown overgrowth of lesions on his face. The background is white and plain. The image does not say much about the class status of the patient. Hi does not have a clean haircut, and the seems to be wearing a white coat.  The name of the condition has been printed on the bottom of the paint, and I`m not sure if the name of the author has been printed on the left bottom side of the drawing. Initially when I saw this image, it captured my attention because I had no idea what the condition could be and was interested on exploring the image and condition further. The lesions on his face are very large and I can imagine the effect they had on patient himself. They make his face look scary especially considering that this drawing was from the early 1800. Since this condition caused such deformity, I feel that people might have been scared of him and even seen him as an evil human being. Even though we see the right side of his face, I noticed the growth is a little obvious left eyebrows, but we cant see the much of the other side. It seems as if the right side must have been more deformed than the left. 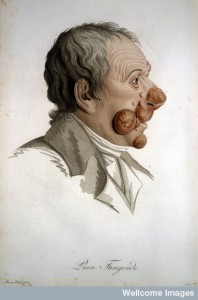