The Louvre Museum is the world’s largest art museum located in Paris, France. The Mona Lisa created by Leonardo Da Vinci has been gaining so much attention recently. The Louvre Museum contains many artworks, but only the Mona Lisa gallery gains the most attraction which has become a safety hazard. I believe it’s time for the Mona Lisa to be moved to its own space rather than taking it down. According to the article, “80 percent of the visitors are here for the Mona Lisa and most of them leave unhappy.” This is because the place is overcrowded with people and they have difficulty observing the painting. The Mona Lisa is a very popular artwork and there are tons of people who have yet to see it in person, therefore it shouldn’t be taken down. The best alternative is to create a space just for the Mona Lisa and limit the amount of people allowed in. This way everyone can get a close up look at the painting and not have to push each other. The more organized they are, the better the experience will be. Mona Lisa has been voted the world’s most disappointing attraction this year and that should change.

This year for Thanksgiving, I had a seafood boil, ham, spaghetti and much more. Sadly, I had to attend work on Thanksgiving but I still enjoyed my time after. 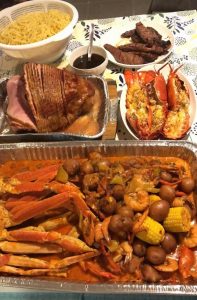 The Notre-Dame Cathedral remains a Gothic church notable for its flying buttresses and gorgeous stained-glass windows. I believe the Cathedral should be restored to what it originally looked like. This 13th-century landmark represents a significant example of Gothic architecture, and it shouldn’t be modernized. I do understand that many architects possess ideas to modernize it but it should be restored to its primary features. After examining the images made by architects of what the outcome could be, I almost had a change of heart. The ideas they express are incredible, but I believe adding those modern touches changes the spirit of Notre Dame like what Garzuel stated in the article.

The sculpture below is known as The Bust of Commodus as Hercules. Commodus was a Roman Emperor who was known for his passion for gladiatorial games. When I look at this sculpture, I see power and authority. Commodus is holding an item that looks like a baton in one hand and some apples in the other. He also has a headpiece that resembles a lion and his upper body looks muscular. After reading sections 9-11 of the Life of Commodus in Lampridius’s biography Historia Augusta, I realized Commodus wasn’t who I thought he was. Based off the readings, I would describe him as a greedy, selfish, crazy person. Section 9 starts off with, “He pretended once that he was going to Africa, so that he could get funds for the journey, then got them and spent them on banquets and gaming instead.” Doing something like this is pathetic and awful. He lied about traveling so he can use the money on gaming and banquets instead. But it gets worse. In section 10 it states, “Whosoever ridiculed him he cast to the wild beasts.”. He was the type of person that only thought of violence as the only solution. He has killed many people for the littlest reasons. Commodus was very destructive and someone who I would never want to be around. His behavior is unacceptable and it is shown that he was like this ever since he was young. After reading the sections and seeing the sculpture, I can tell that the item in his hand is a club that he used to strike people while he was wearing woman’s garment or lion’s skin. Now I view the sculpture differently. All in all, Commodus was a nasty emperor and a super evil person.