I believe the revival of the tintype photography was an interesting move because in our generation, tintype is very rarely used by photographer to the point where people might not even know what’s tintype is. When Ed Drew decided to use tintype style photography, it allows the audience to see photography in a whole other ways. When looking at Drew tintype photograph, it very different to the common photography style we used today. It gives a very vintage feel. Since Ed Drew photograph military/war related, tintype allows the audience to feel a specific way. The effect of tintype allows the subject to have more emotional impact to the viewer. While looking through Drew photograph of soldier, it contain a certain emotional feeling. Each photograph show the struggle or of them being in war based on their face expression or even pride for their country. It’s very beautifully done. He was able to convey the essence of beauty in his photograph. Each photograph he done was a way to create the memories to be shared with their their loves one. It’s a perfect way to treasure such authentic feeling, story, history, etc. So although tintype might not be popular now but, it’s definitely a perfect way to create such beautiful photograph that an average camera couldn’t do.

All around the world, you notice people renewing things that were once used. For some people, it is extremely successful, meanwhile for others, it is not. Ed Drew is the man who has brought back the photographic process of tintypes. A photographic process that was created and used during the Civil War is now being used again by Ed Drew to record himself and his fellow soldiers in a unique way. Of course, he could have simply used a digital camera, but Ed Drew wanted to tackle the obstacles that might have prevented him from taking amazing photographs with the tintype process. Personally, I think it is a wonderful thing. It is always great to be a little bit different than anyone else. To show yourself and your fellow comrades in arms in this unique manner is heart-warming. Not only is he creating a wonderful memorabilia, if the unexpected were to happen, but he is showing the world how the soldiers wanted to be seen. The gloss of the tintype really makes the soldiers come off as confident and unique individuals. If more photos of modern warfare were to be taken in this manner, I feel as if there would be an increased amount of ways to show a variety of emotions, emotions that might not be able to be shown with a digital camera.

The idea of reviving an old process in the tintype to document modern warfare by Ed Drew was an amazing one. If you look at the tintypes from the civil war  you can see how the photo lights up and how timeless they are. There is also a certain sharpness in the photos where you can see how real the soldiers are, in sense capturing their souls. The photos Ed Drew took of modern warfare were more than beautiful. Like a mentioned earlier the photos really light up and you can see into photo and into the people. You see how honorable and proud the soldiers were to serve our country and even take the photo. I also liked how passionate Ed Drew was when taking the photographs he stated how he wanted to capture their souls and how humane they were, I think he did a very good job with that considering all he had to go through to get the photos done with the environmental challenges, military actions during the photo shoots, and even just the process itself so many things could have went wrong. Through he passion and dedication he was able to create and share his emotional and timeless tintype photographs. 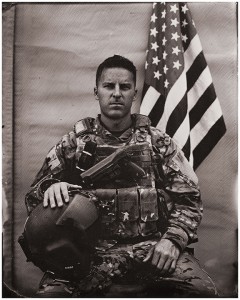 Frederick Scott Archer’s wet-plate collodion process dominated photographic production in the mid-19th century.  There were three options with the wet-plate process, you could produce a glass negative or an ambrotype (a glass negative with dark backing) or a tintype (also known as a ferrotype). A glass negative allowed one to pull numerous paper copies and this was the method practiced by Civil War photographers such as Matthew Brady and Alexander Gardner. As noted in class, many itinerant photographers produced tintypes during the Civil War preserving portraits of soldiers for loved ones, and now as historical documents.

San Francisco-area National Guard reservist Ed Drew has revived the tintype, perhaps the most popular wet plate process of the 19th century. While deployed as a helicopter aerial gunner in Afghanistan in the Spring 2013, Drew took tintypes of his fellow soldiers. These were the first tintypes produced in a combat zone since the Civil War. Watch a short CBS news segment on Drew’s photographs and look through the slideshow of his work. What do you think of the revival of this old process to document modern warfare?

Homework #2 is DUE by Thursday October 15th.  Diamonds and Spades Post, Clubs and Hearts Comment. Please note your blog group! Email me if you forget.

Homework #1: The Power of Photography and the Syrian War Crisis 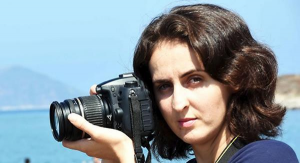 On September 2, 2015, Nilufer Demir, a photographer working for a Turkish news agency, took a series of photos of Aylan Kurdi, the three-year-old toddler, who drowned as his family tried to escape the ravages of the civil war in Syria. Demir’s photographs show Aylan’s limp body lying along a shore in Turkey and a police officer carrying his corpse away. These shocking photographs quickly spread on social media and through media outlets as more news agencies decided to publish the images. Demir was criticized for taking the photographs and the news agencies were criticized for lacking respect for the dead. Some papers decided to not publish the images.

In a course on the history of photography, we will encounter equally brutal imagery, such as Nick Ut’s photograph of a child fleeing a napalm bombing. Take a look at Demir’s photographs at the Time link (I couldn’t post the photo here). Read the article in Time about the effect of this photograph, and comment on what you think of the image. Do you think it should have been published? Why or why not? Do you think it is effective as an image of the Syrian civil war crisis? Before you submit your comments, please read the Blogging Guidelines (especially the first paragraph!)

You can learn more about Aylan Kurdi and his family via NPR here.

Hello ARTH 1100 students! Welcome to the class website for Professor Sandra Cheng’s course on the History of Photography.  Our section meets Tues/Thurs mornings at 10 AM. The OpenLab is an integral component to our class. I look forward to our reading, writing, discussion, and LOOKING together this semester.  During our first class we’ll go over how to get everyone signed up on the OpenLab and the class website.