“Death of a Loyalist Soldier” by Robert Capa will always be seen as notable war photograph even if it was staged or not. After reading the article written by Richard Whalen I concluded with Whalen that Robert Capa’s photo was not a staged photograph. Robert Whelan made some great points on the validity of the photograph. During a time of war, I don’t think a photographer would have the time to even think about staging someone to take a photograph. I’m certain that bullets were flying everywhere, and soldiers were either securing a safe place for cover or either firing back at the other side. The authenticity of Capa’s photograph matters because what was captured in that photograph is what makes it valuable. Even if this wasn’t captured in a photograph, that was the time there was a war going on and that was how soldiers actually die without them expecting it or knowing when they will be shot. Another great conclusion was that of Captain Frank, who was shown the photograph and asked to give an opinion as if he it was an evidence in a homicide case. Frank after looking at the photograph, concluded that the person in the picture was actually shot. He noted that if you look at the person left hand, you will see that his fingers were curled, giving an indication the muscles have gone limp and he was already dead. He also stated that someone faking wouldn’t know that such a hand position was necessary.

Today we had the pleasure of learning the steps of making danish dough using the modified straight dough. We also prepared an assortment of breads and rolls. We made Whole Wheat Boules, and Assorted soft rolls- Club, Butterflake, Cloverleaf. The class was also shown how to decorate a cake, which we had the opportunity to practice our decorating skill. 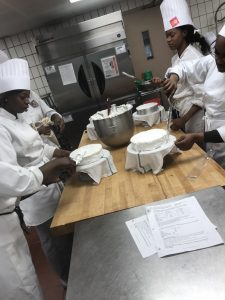 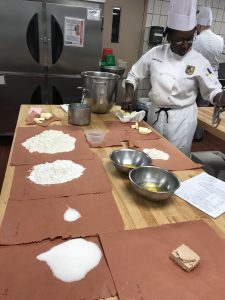 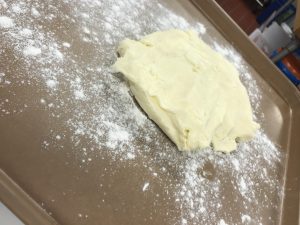 The mixture of butter for the Danish dough 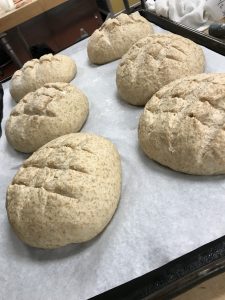 The whole wheat boule ready for the oven 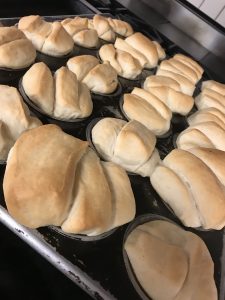 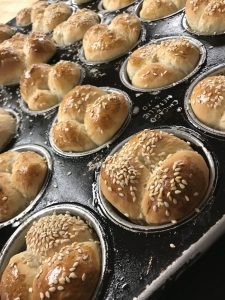 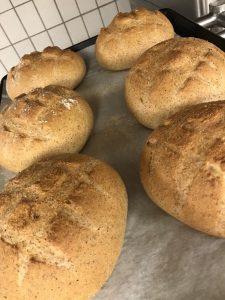 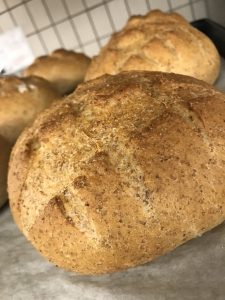 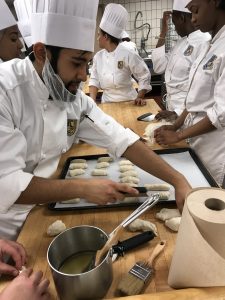 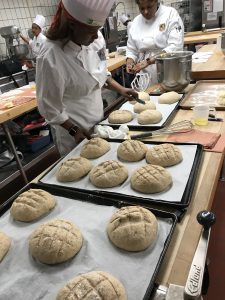 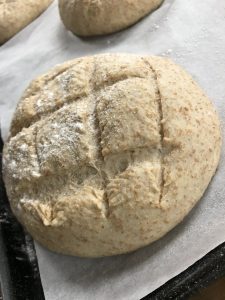 The Napoleon is a pastry made of many layers of puff pastry with filling alternating the layers. It can be eaten as a dessert, or even as a decadent meal. As a French pastry it is called mille-feuille, and it is filled with whipped cream, and pastry cream. The topping may be simply powdered sugar, or a layer of fondant, often with strings of chocolate drawn into a chevron design. I had the pleasure of visiting two prominent bakeries to sample this amazing pastry. The bakeries I choose to sample these were at the Financier and Ferrara, both places were located in lower Manhattan. My first stop was at the Financier Café, located at 60 Stone Street, New York. When I first entered their store, I was immediately bombarded with the strong aroma of coffee which I love. I then noticed the lovely colors of the cakes and pastries in the showcase. I began my search for this Napoleon pastry, which I located quickly. I left Financier and headed to Ferrara Bakery and Café, located at 195 Grand Street, New York. When I got to the area of Ferrara, it wasn’t hard to locate. The place had a large lighted sign with their name in lights, reminded me of Broadway. As I entered, I noticed the place was much more crowded than Financier. Apparently, they are like a small restaurant combined with the bakery. The line to purchased baked good was very long, and they had more products in their showcase than financier. While on line waiting my turn, I noticed they had the Napoleon but in two sizes. A regular size and a half size of the regular ones. I purchased the regular size and two cannoli and left for home. 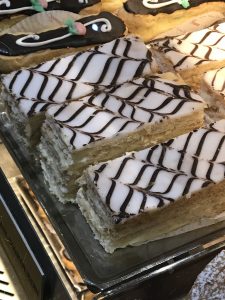 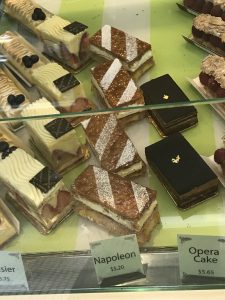 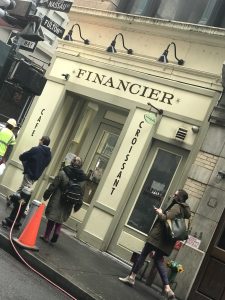 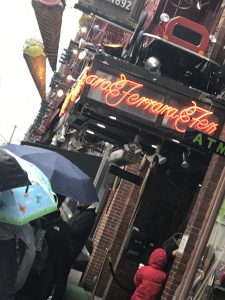 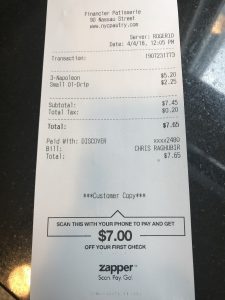 Photography has been around for many years, but in this era, it seems that photography can tell a story without someone actually telling it.  Many people today are obsessed with taking a photo of their food when out dining and posting it on social media such as Instagram, Facebook, etc. Most are posting, so their friends and family can see, and like their pictures, but sometimes the pictures are viewed by numerous people around the world.

I have a tendency to take a picture of my food when I cook, but sometimes it takes about 2-5 attempts to get the perfect shot. I want a shot of the food to look appetizing, want the color to pop out, and an underlay or background to be just right before posting. I sometimes get likes from people that not on my friend’s list, so I know it’s reaching a vast number of people. They say most people eat with their eyes first before the taste.

The internet is the number one avenue that people used when searching for anything, including food. Usually, the first thing that pops up when a search is done for a restaurant, it’s usually a picture of food. A picture can represent numerous interpretation without writing any words, or to describe it.

Many people now are using a hashtag in order to do searches, which seem to a phenomenal way to do a search on social media. I think the social media world is a great tool to use to advertised and reach millions of people to expand or showcase your business, plus it doesn’t cost anything.