During the second, I had a little situation with the lighting but it came around smooth at the end. I shot Joseph on the white backdrop. the light effect on the background came out nice, which had an gradient effect to it. I also used one light  from the upper left side toward joseph which had a light to dark effect on him, making it slightly look dramatic. overall the shoot went well, all i had left to do was do a little adjustment with the photo on photoshop and it will set to go on the cover of the magazine.

The Final Shoot was very rushed, so I was only able to shoot 2 models. Regardless of the limited time, I quite liked the end results from this shoot. I was able to capture a very dramatic mood in Antonio’s portrait by playing with the lighting and different facial expressions. His hair casted few shadows in his face which also added more to the mood that I liked. The portrait of Peter was very subtle, quite opposite of Antonio’s but also powerful by having his face at a 45 degree angle and eyes directly into the camera. Throughout the entire project I wanted to keep the images consistent but having their own unique quality at the same time. I was most successful at this on this shoot. For my final model, I shot myself in my home studio. This was difficult and took a long time. However,  I was still able to maintain the consistency I had with the other images. I chose not to use color for my face paint, since I had in 4 out of the 6 portraits taken, I thought this will have balance the group of images better as a whole.

The first shoot went well to be honest. my model was Kelly Thompson and she was comfortable on the set. my main goal was to capture full body and portrait shots for the magazine cover. I used the white background so that she would stand out in the picture and used main light to lit her whole body because she was wearing spring colors which was theme I was going for and I want the colors to be vibrant which I would edit in photoshop.

This shoot went by really quick due to prior planning before hand and as they say the third times the charm. My model was peter and the goal was to shoot him and then transform him into Zeus the leader of the greek gods. This time i used a white background to contrast with his black outfit. I used a soft box and two side light behind the white boards on each side.

The second shoot went pretty well for me. I shot Willber on the black back drop. The lighting was more controlled and ominous. I had one over head light with a grid and aside light also with a grid. The aim of these too lights was to give a dark over shadowing all while still showing some portions of his body to be lit.I had trouble with the over head light because i needed his whole face to be lit but because of his height the lights gave dark shadows under his eyes so i had to add another light and a fill to solve the problem. Besides from that the shoot went swimmingly.

For my third and last shooting, my big idea was to show what the headphones do for you, rather then what they are. What I mean is to show how music brings people together and how the headphones help us in that process. On these shoots, the product is not the main focal point. These pictures focus on people interacting and using the product in a friendly and realistic way.

In these pictures, I used a white background with plenty of light. The feeling is of friendship and joy. The lighting really helped bring that idea to life. I do think some pictures came out very bright. Others a little dark, but in the end I got some nice shoots. On my opinion, the concept within the picture is there.

On my second shooting, I personally faced many complications, especially with the lighting set-up. I moved the light around. I also increased and decreased the light, so that the glare was nice. Overall, the picture came out darker than expected, but the mystery feeling I was looking for is there. I experimented with some angels as well, positions and some color (Blue).

For this shooting I was going for a mysterious felling. The light did reflect that mysterious looking that I was aiming for. To set-up the right amount of light, on my opinion, was the hardest part. Additionally, on my first shooting I had a model. On this second one, I didn’t. Moreover, because the product was by itself, I added sunglasses to recreate a face looking feeling. Both, the glasses and the headphones created a human face without having to have an actual person there. The shoots also reflect a luxurious feeling, which I was looking for as well. Overall, the composition was good but the lighting could have been better. 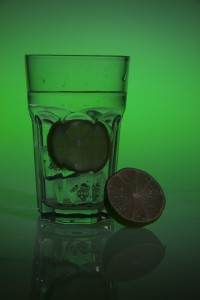 For the last time of my shooting, I use color paper to shot with my watery fruit. The result comes out pretty nice, but I think the most important thing with the color paper is setting and the position of my fruit. I use green light to shot with lime, and also this time I use continues light. It is bring enough and the background color is very elegant. When I see the photos after, I feel very happy with the photo. Also, I figure out that if I shot without any light light, It comes out with some kind of darkness sense too, but we still can see a clear reflection under neath it. I like this shot.

I was third person to shoot this time so I barely have time to shoot today. I did’t have enough time to experiment around the different settings, but the settings with the top soft box, flash underneath and white background makes the sliced citrus look I was trying to abstract pattern with the surface of citrus kind of mystical. I used 200mm lens which i wasn’t used to it, so i had little hard time to focus on the subject for the first attempt. Some of those photo came out interesting, but I wish I had more time to experiment other settings, too.

Concluding our studio shots for the final class project, I worked on the composition for my shots. Using a 10 x 8 document for my canvas, I split my camera shot of my phone with a photo of a actual handheld digital camera. Doing this I scaled the two photos proportional to each other and used the transform tool to warp the phone to match up with the camera’s reflection. For the end result I was able to capture to the look and feel of my objective for the final. I will go back to this composition and use new dimensions for my document and also sharpen my subject as well as blacking out the background if needed.