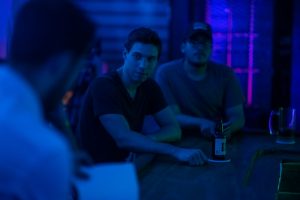 OVERVIEW:
Director at Y Cre8te Films? (YCF) and of the MMHC production, an episodic series that is fantasy/drama in genre; following the daily events and lives of eccentric and “unique” patrons at a Brooklyn speakeasy, the Locale. The purpose of this project was to showcase the technical skill set of YCF, specifically lighting and set dressing. Thus far, two episodes have been shot, leading up to the climax of the series’ plot. In this episode, a beloved Locale regular, Malcolm is mysteriously murdered by the antagonist, Luke, a mystifying character. As the director, I will be working with the entire film crew and with production management throughout all stages of production: The AD, production manager, producer, stage manager and editor. The estimated timeline for this project will be from October 2019 to April 2020, including pre-production, production and post-production. Equipment will be reused for the duration of the MMHC series, reducing overall cost.

Responsibilities/Tasks:
Oversees the creative and aesthetic direction of entire episode, ranging from pre-production to post-production. Writes scripts, scout locations and casts talent; directs crew and cast in bringing cinematic vision to fruition. Includes director’s notes on crew script for production management/team to follow. Debriefs AD that they may relay necessary information to crew and cast. Views playback with AD and DP for artistic and technical purposes.

Goals:
Chemistry within the production team. Effective communication between management team and crew, and between the crew and cast. Establish an efficient workflow among the crew. Maintain high quality visuals via thorough pre-production, efficient project managing and data management. Screen the entire series at a public venue and upload to Vimeo and YouTube. A medium, long-term goal are to enter film festivals.

CHALLENGES:
I started this project as the director, focused merely on the artistic aspect of the production. However, my role changed rather quickly, as I began to operate in the role of project manager, beginning at the pre-production process; due to my project manager at the time not operating in an efficient manner. The lack of communication among some of the management members led to key tasks, either not getting finished or completed in a timely fashion; resulting in me having to accomplish those tasks. This took away from fulfilling my creative duties as director. Looking back, I chalk this up to inexperience of myself and entire crew; and not having sufficient production meetings. During the day one of the production, I had to step in as camera operator because of a misunderstanding of the day one call time and schedule on the part of my camera A operator. My stage manager later notified me, shortly before call time that she would be unable to devote her time fully to the project. I then began to experience issues with my project manager, as he was neglectful of the duties assigned to him and operated in an unprofessional manner. Ultimately, it was the lack of communication, planning and time management that resulted in day one of episode 2B being extremely difficult.

Day two was much better, as my team and I rallied after having a post-production meeting, end of day one. Through the pow-wow and reflection, I was able to pinpoint the areas where we made mistakes in. One major change implemented on day two, were running lines with the cast and taking time out to block the actors and actress. This made for a smoother and more relaxed shoot.

TAKEAWAYS:
I have been working on this series since April 2019, and what began as an idea, with all intentions of being a short, quickly turned into a series; which was greatly unexpected. Hindsight is 20/20; as the series draws to an end, episode 2B was the most challenging thus far; hence me selecting this episode for my culmination. Episode 2B presented many challenges, both professional and personal. This specific project stretched me as an individual, made me more “human” and further shaped me as a leader. My takeaways from episode 2B are:

Robert McEachern is a senior at the New York City College of Technology, specializing in videography and lighting. He is also a filmmaker, seeking to tell stories that address current social issues, and that are entertaining.