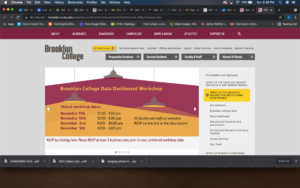 Last week I completed a flyer and banner for the Data Dashboard. This week it was posted on their website! It was really cool to see my banner live on a site that was not my own! (above image)

The new week started on October 4th. Per usual our group zoom call began at 9 am. It was myself plus our supervisor Isana and two interns. We were informed of an upcoming project called the Employment Report. We were to begin building the frame of the document booklet.

Then Isana instructed us to decide amongst us who was going to do which pages. We had to discuss font size and how we would make the pages cohesive and identical to the previous year’s layout.

I waited about two hours before emailing because I was nervous and did not want to take charge of the first collaborative project. I want to be part of a team where people feel comfortable giving ideas, because I think my ideas always benefit from other peoples feedback. However when the two hours were up nothing was decided so I made a suggestion on how to divide the pages and they both agreed. Although we still did not decide on the pages we were able to agree on individually each of us would do our version of a cover design. This project was put on pause for the rest of the day.

At 1:00 pm, one of the interns, myself and our supervisor Isana got on a zoom call with Dr. Sultana. We are creating the Assess@CUNYflyer for her department. She provided feedback that we would relay to the intern that was unable to attend. She advised us the deadline for the first issue is November 1st. Their goal is to promote, share and receive participation.

The “Role of the Central” title they were still unsure of, and they knew the Assess@CUNY name was going to change.Which meant future updates would be made. Before the zoom call ended I asked if Dr. Sultana preferred San Serif or Serif fonts and she was unaware of the difference. After explaining she wanted to see versions in both. Dr. Sultana provided an image to use but mentioned there would be some photoshop work. She did not have the original version. The other intern and I were given three hours to complete the updates.

It turns out she and I both misunderstood the instructions (we left out one of the bullet points) and needed to meet with Isana on October 5, at 8:30 am for a brief update on the flyer changes. 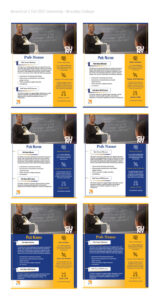 We had to submit by 10:30 am because Isana had a meeting on our team’s progress and I do not officially work on Tuesdays. However because I misunderstood and she needed it ASAP I was able to complete it.

October 7th we paused the Employment Report and jumped right to a new project called the Brooklyn College Fact Sheet. I and the other two interns were instructed to prepare/review the project but only focus on image selection since some of the numbers were not yet provided.

Our second project was the main focus of the day. To create versions of their Exit Survey Flyer. This flyer normally goes to the graduating class but with Covid19 everything got pushed back. We would be creating flyers for the graduating class of 2021 keeping the Brooklyn college colors and same theme as previous years.