About a certain potato…

Congratulations on finding this lovely blank page yet to be filled with wonderful goodies. I'll review, renew, and edit this.

Logo/Banner task: Create a logo and a banner that will be uploaded on Open Lab that reflects your personality and/or goals.

So at first, I was really hyped on thinking what kind of logo or banner that went well together that reflected on my personal life. Then as I started brainstorming and then I went into the process of elimination with what to create. I wanted to create something that was raw and reflected on my mood, however I was stumped on what to do first. I delayed this project for awhile just because I couldn’t motivate myself to make the first step.

So my first draft ended looking something like this…

I really just wanted to make a logo with white roses, pinks, blues, and bunnies.

It looked alright on my header for awhile, however I decided to experiment with it. I’m not that great on Illustrator or Photoshop, but I decided to make do because this was actually drawn on my phone with a stylus. As one should note, working on small strokes on a tiny screen hurts the eyes and the wrist.

So I tried my second attempt on actual sketch paper torn out from my book and decided to work with it in acrylic paints and marker. I’m not an expert at this, but at least it gave me better control than what I initially had on my phone because I could rotate and re-position the paper without having to switch tools.

So on paper, I felt more confidence on brush strokes, however it was obviously too big on actual paper. It seemed all too confusing. It still seemed lacking. So I guess I went ahead and tried to redesign the first one with some alternate changes. I wasn’t aiming to make this into a flower radiating random colors with some abstract of negative/positive shapes within.

And… finally I think I was pretty satisfied with the final version.

So this logo best represents me because starting with the top, I intended to make that into a feather or a leaf, but it ended up being almost like a tree root. I didn’t want the image to be empty like the first one, so I added additional shapes within the abstract moon. I wanted to add white roses because they’re my favorite type of flowers besides lily-of-the-valleys. Also I wanted something to reflect on sadness, so it became this lovely abstract teardrop shape. Lastly, on the bottom left, I wanted to match my banner with the torn out page. It’s becoming one of my favorite accents to add onto my ever changing art style. I wanted this logo to be a reflection of my current state and something to symbolize growth. The thorns represent challenges.

As for my banner… I decided to use something that represents my depression and struggles. 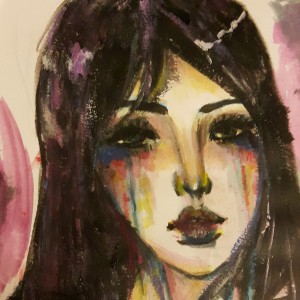 Cloud9 is a North American gaming organization team that mostly focuses on MOBA (Multiplayer Online Battle Arena) games or e-sports; however they became a sensation on their victories on League of Legends (popular MOBA). Cloud9 was founded in 2012 by Jack Etienne (QuanticPope) who recruited members from former gaming teams that had bankruptcy issues that weren’t able to get sponsors to tournaments.  Cloud9 members were supposedly to disband after their loss on pre-season 3 for the North American League of Legends Championships series (NALCS), but they’re still staying strong as of its current state. C9 has had some changes throughout the years and they have been sponsored now by Intel, HTC, Cooler Master, MSI, Loot Crate, Red Bull, NVidia, Logitech, HyperX, G2A, MobaFire, Overwolf, Alienware, and some others.

Previously they were known for starting out pretty bad on records on losses and were known as Team NomNom previously. The roster for the members has changed a lot since it was formed due to players having difficulty to communicate to each other, failure on teamwork, and/or losing to other gaming teams on tournaments. Despite what the community says about them, they don’t really care for all the negativity that is passed around. They came out strong in season 3 (2013-2014) on the 2013 MLG (Major League Gaming) Winter Championship, Summer Promotion Qualifier, and won 1st place in the Season 3 World Championship. Since then, they today still compete in other world championships in e-sports and dominated winning 1st place in most.

The logo is a cloud formed by three nines hence Cloud9 or C9 for short. Etienne was a former manager for another competitive gaming team known as Team SoloMid (TSM), but he has helped C9 be stronger and competitive. Their logo uses the Devil Breeze Bold typeface and their logo has the nines rotated in 90 degree angles so that they form a cloud. The colors used for their logo is white, blue, and black. The cloud has a bluish gradation tone to it lighter on the left and transitioning to a darker hue on the right. C9 has their own online store if people would like to support them by buying their merchandise such as hoodies, tees, wristbands, or posters. Although tees usually have their logo in white on a sky blue background instead of their usual defaulted logo found on everything else. Some of their newer products will have their sponsors under their logo. 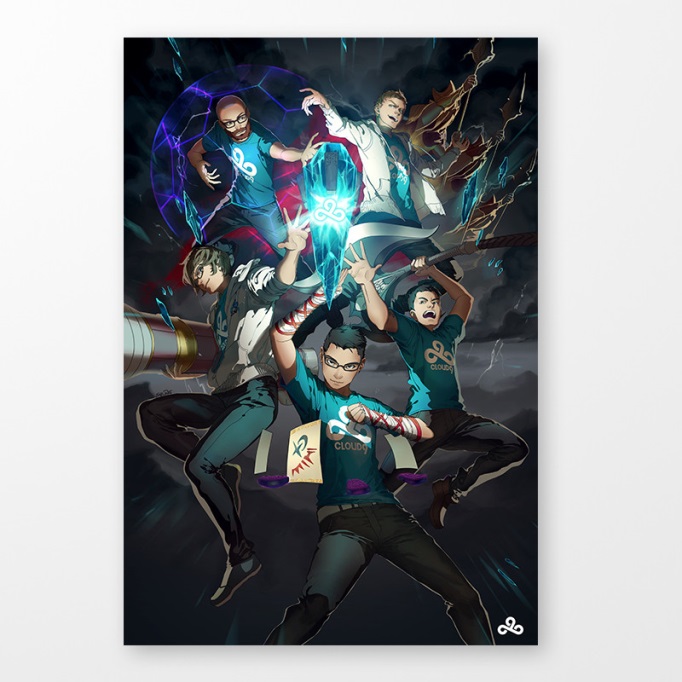 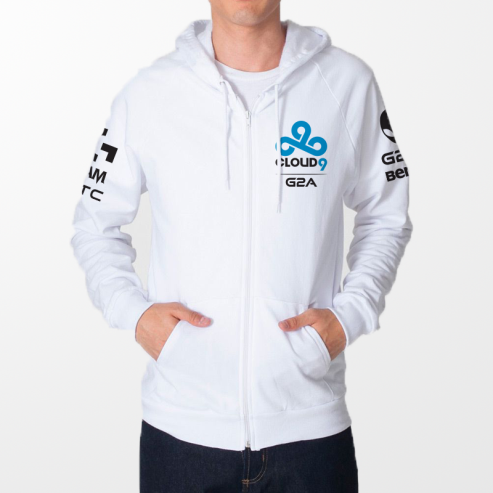 The team name carried weight and sentiment as they took the seasons and North America by storm because despite the negativity or doubts other pro critics had against them, they withheld it and won the championships in a positive attitude. In 2015, they won the World Championship for Heroes of the Storm (another MOBA), but each individual member of C9 has had influential roles upon them. Their team captain, C9 Hai (Hai Du Lam) has shifted roles and helped his team be victorious. He is also one of the original members of Team NomNom, but everyone else had left C9 from Team NomNom. He has watched his team change throughout the years as new and old members leaving or joining. His influence is strong and it shows when they’re together because he’s their shot caller, but currently in 2016, he is sharing roles with newer members that he feels comfortable with having them replace him someday. However, each individual member also streams on Twitch.tv.

Many people began to bandwagon with whichever team that had the most leads, win rate, or popularity status during tournaments. Most people were much hyped on seeing C9 against TSM because of they both are the top two North American teams of League of Legends. Surprisingly even though most people placed bets in 2015 for NALCS for C9 74% of the bets against TSM’s 26% of bets of the winning, TSM came out on top and shocked many fans because C9’s history was boastful against TSM’s underestimated team. However, the community does have high hopes for C9 in 2016.

There’s actually a reason why I can’t use Photoshop/Illustrator on my computer, it freezes and it’s extremely slow as if my PC was running on a potato. It’s also paired with shared internet run on a toaster. 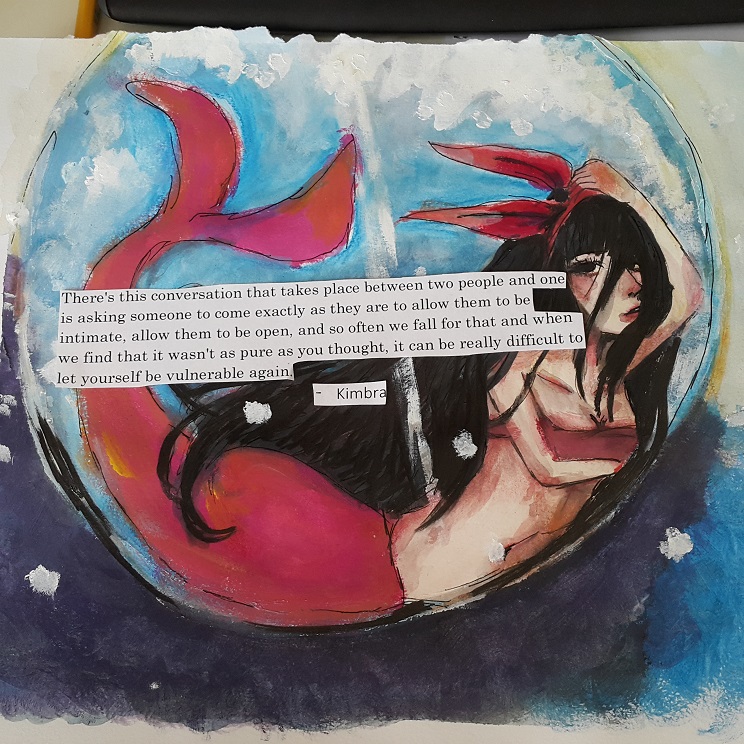 I paired up this image with the quote because vulnerability is like a bubble. At any given moment it’ll burst so untimely like love. I used the fonts, Century Schoolbook and Calibri Light in sizes 14 and 16 respectively. I’m not that great in drawing a mermaid, but it somehow reminded me of the true ending of The Little Mermaid by Hans Christian Andersen. 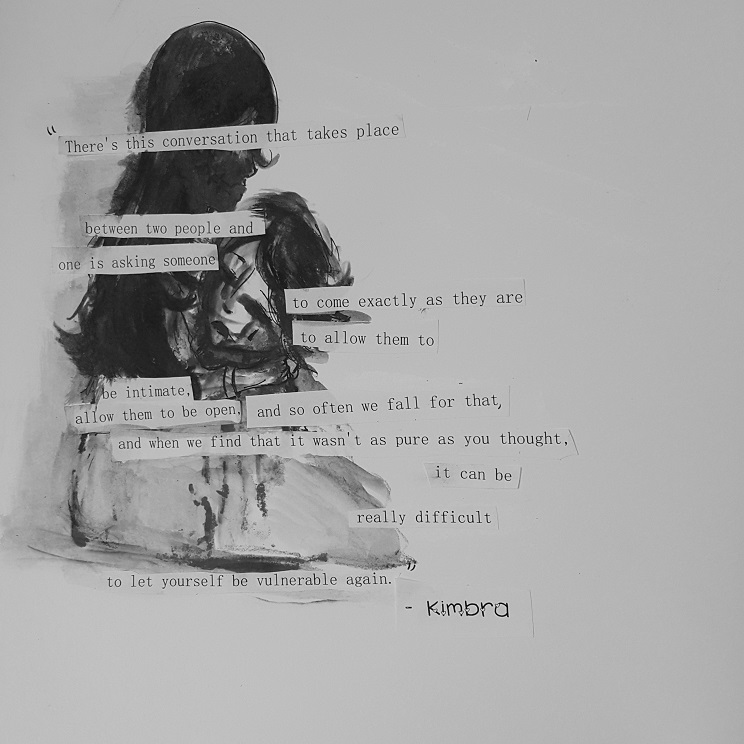 I used fonts, Fang Song and 2Peas Heart’s Delight in sizes 14 and 21. I actually don’t know how it got to be so gruesome and dark in this image, but a potato does what a potato has to do. Love sometimes can be imagined as a trap or it’s not always the sweetest thing in the world. Sometimes it’s so elusive, we fall for things that we imagine the other side to be; then it falls to shambles after it gets very well built. Also happens to remind me of the love story of a red velvet mite.

Below, I actually had a very nice drawing coming along, but I was lost in the point of no return. I decided to cut up the image to two halves with a heart carved between. Sometimes we don’t really get to see the other side of a person because they have trouble showing how vulnerable their ‘real’ selves are.

So love grows stronger with intimacy and acceptance that’s been built on trusting each other. So this quote hits me in the ‘feels’ where if you give yourself to another, only to find out the truth is darker than what your rose colored tinted glasses saw. Asking them to be exactly as they are sometimes is too much to ask just for the sake of both parties trying to protect themselves. It makes you stronger in the end, but your eyes become ‘open’ to not let yourself be taken advantage of. Font is Bodoni MT Condensed and Victorian Parlor Vintage Alternative in sizes 21 and 25. 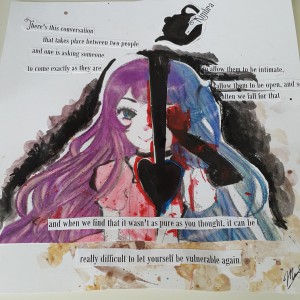 The original quote can be heard in audio here: